Recent Art Center Film alumnus Jon Jon Augustavo has more than one reason to celebrate. The music video “Thrift Shop” that he directed for Macklemore & Ryan Lewis—with 324 million YouTube views and counting—has been nominated for BET Music Video of the Year.

On top of that, their second music video collaboration, “Can’t Hold Us,” has racked up nearly 44 million views on YouTube in six short weeks. Both songs made it to number one on the Billboard Hot 100 singles chart, and “Can’t Hold Us” is now four weeks into holding top spot.

But Augustavo sees that success in a more humbling light.

“This video was crazy as I was director, cinematographer, gaffer and other random positions, because this was before they got big so the budget was small,” said Augustavo. “It was just a ball of crazy. A lot of it is a blur for me, but there were four long and hot days of me setting up lights, loading trucks, moving dolly tracks and swapping lenses solo.”

It’s no wonder that Augustavo calls this video “a testament to the indie filmmaker.”

“Jon Jon’s experience on these videos certainly shows the value of the comprehensive filmmaking education we provide at Art Center,” said Ross LaManna, chair of the Undergraduate and Graduate Film Departments.  “It’s not enough for a young director to have a working knowledge of all the jobs on a set.  These days, he may be expected to do those jobs!” 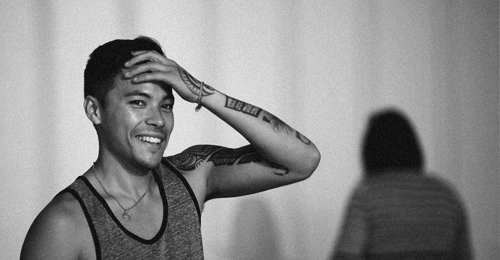 Augustavo met the rapper and producer duo Macklemore & Ryan Lewis while he was making independent videos for friends at the same time he was attending Art Center College of Design. They asked him to come to their studio and talked about what they wanted in a video. “Macklemore is very, very good on camera and he already has his style,” says Augustavo. “I didn’t have to really do much with that. It was more deciding what we were shooting and how to do it.”

Those videos have helped Macklemore & Ryan Lewis catapult to fame, but it’s also shined a light on Augustavo, who shares Seattle roots with the duo, a fact highlighted in “Can’t Hold Us.”

In addition to the runaway success of his music videos, he’s also shooting commercials, directing a TV pilot and working on a feature-length documentary with the ultimate goal of directing a feature-length film. Meanwhile, he continues to work on a short drama he wrote during his second term at Art Center called “How to Disappear Completely.”

While music videos are his job, filmmaking is his passion. It started by drawing pictures until his dad bought him a camera. The next step was making those  pictures move. “I guess I always wanted to tell little stories and share my ideas with people, and I found making visuals was the best way to express myself,” says Augustavo.

As a student at Art Center he honed his skills as a cinematographer and director. “I shot so many of my classmates’ films I sometimes forgot to work on my own narrative,” he says. “But all the shooting I think really helped my visual style that I have these days,” said Augustavo.

He cites faculty members Affonso Beato ASC, ABC; Victoria Hochberg and J.P. Geuens with helping him learn how to develop and craft a narrative, as well as how to ask the right questions and make something worth watching.

“You know, I learned a lot at school,” said Augustavo. “Narratively I had no idea what I was doing when I came here.”

Collectively approaching 400 million online views, fans would agree that he has certainly made something worth watching. In fact, Augustavo’s second Macklemore video (featured below) for the song, “Same Love,” in which the artist unfurls a rap narrative about standing up to homophobia, has reached beyond commercial success to instill social justice and tolerance values in young listeners. Need proof? Check out this moving BuzzFeed post