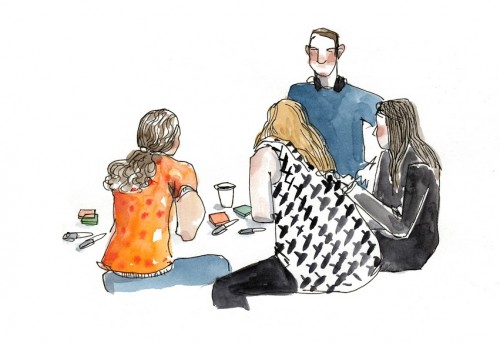 This is the third in our three-part Dotted Line series covering “The New Professional Frontier in Design for Social Innovation: LEAP Symposium,” hosted by Art Center College of Design Sept. 19–21, 2013.

Overheard (Random quotes from the day) 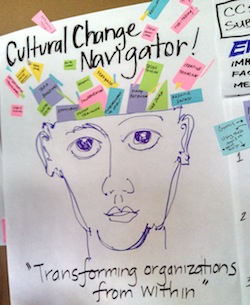 Practical tools, next steps and taking action were the focus of the third and final day of the LEAP Symposium presented by Designmatters, the College’s social impact department. A key aim expressed by many attendees was to bring the valuable new tools they gained during the confab back to their home base organizations to help establish solid career pathways for young design talent and clarify the direct link between great design and success.

The last day was choreographed in three parts. First, working groups who had self-organized in to small thematic clusters, spent a few hours finalizing proposals that were later displayed on giant poster boards all around the student dining room, taking a page from grade school science fairs. Then, a spokesperson for each project pitched it to the larger group.

Two panels followed the entertaining pitch session. The first offered perspectives from Art Center students who have worked on social impact projects and aim to build a career in this emergent space. Mariana Somma said she gained validation, a sense of power and urgency to influence change. Somma’s now taking concrete steps to expand upon her professional tools (and future job prospects) by joining the first cohort of the new Innovative Systems Design dual degree program, a partnership between Art Center’s Graduate Industrial Design Department and the Drucker School of Management at Claremont Graduate University, aimed to inspire and prepare the forward-looking creative leaders of tomorrow’s global marketplace.

Next, a panel of non-designers offered reflections upon the takeaways of the symposium.  Panelist Lucy Jones, a seismologist with the U.S. Geological Survey, said it was only through a direct experience with Designmatters and Art Center’s established DesignStorm® hands-on process that helped her clearly understand what she was getting out of the partnership. “It made a big difference in conveying the value of design to how we are trying to influence behavior around earthquake safety issues,” she said.  When her fellow scientists who joined her for the DesignStorm® were impressed with the evidence of a successful process, they could more clearly see what’s to be gained by it, she explained.

Panelist Bill Huang, director of the Housing Department for the City of Pasadena, offered proof of how valuable partnerships with local government can be to social impact design when he revealed the latest news about Welcome Home, a Designmatters project aimed at raising public awareness about homelessness in the city.

“Not only is it fully funded, we’ve raised about 10 times more funding than we actually anticipated, so it’s going to be very robust,” he said.

Back at the science fair, teams presented practical action steps to implement after LEAP. The concepts were embodied in an array of catchy team names, such as “The Collabinators,” “We Are The Champions,” “Breaking Through Design’s Glass Ceiling” and “The Cultural Change Navigator.”

One of more than a dozen proposals presented was by the “Skill Swingers” group who encouraged professionals to “sleep around,” so to speak, through temporary exchanges in order to gain new experience without having to leave a job. Professionals could switch places to expand their skills and share knowledge. For instance, a designer in New York might swap with a social worker in Seattle for six months in order to gain real world experience in a different field. Similar to the shared economy, perhaps the two workers would even swap apartments during the switch. The swingers analogy came out of the idea that the worker would be having an “affair” with another employer, but it would all be approved in advance: a fully transparent affair. Team members see it as a great employee retention tool. Both parties benefit by taking a sabbatical from their current world and diving deep in to a world they need to know more about and gain expertise.

As participants reviewed proposals, a lot of the conversation centered around how to talk about social innovation design. “My elevator speech is ‘I want to create the next generation of activists’” said Gala Narezo, Art Center Photography alumna and founder of What Moves You?, an organization that produces educational public art and media.

As the session came to a close, Amatullo asked attendees to share commitments they are willing to take on to advance the conversation about fostering new career pathways. Takeaways from the symposium ranged in scope and focus, including:

Amatullo asked all those who boldly stated their action items to email them to  Jennifer May, LEAP Symposium manager for Designmatters. “On the tactical side, everyone who made a commitment, we’re going to hold you to it,” said Amatullo.

Before participants said their goodbyes during a sun-drenched reception by the Sculpture Garden, organizers expressed deep gratitude to the many individuals who helped make the three-day marathon a success.

Offering her reflections on the strides made over LEAP’s jam-packed three days, Amatullo was optimistic.

“I’m really very excited to have witnessed the energy, sense of humor and collegiality in this room,” she said. “The human connection was very palpable for all of us here.”

She expressed her pride and gratitude for the honest sharing that took place throughout the event and admitted to being enthusiastic, invigorated and inspired.  Praising the genuine commitment among attendees when they shared actionable next steps, she closed with a quote from a community leader who said “the reality of our constraints in a day is what mobilizes us to act.”

“I encourage you to leave with a sense that we have to conquer those constraints, there’s a lot we can do about it,” she said.

For THE LEAP, view our posts from Day 1 and Day 2.