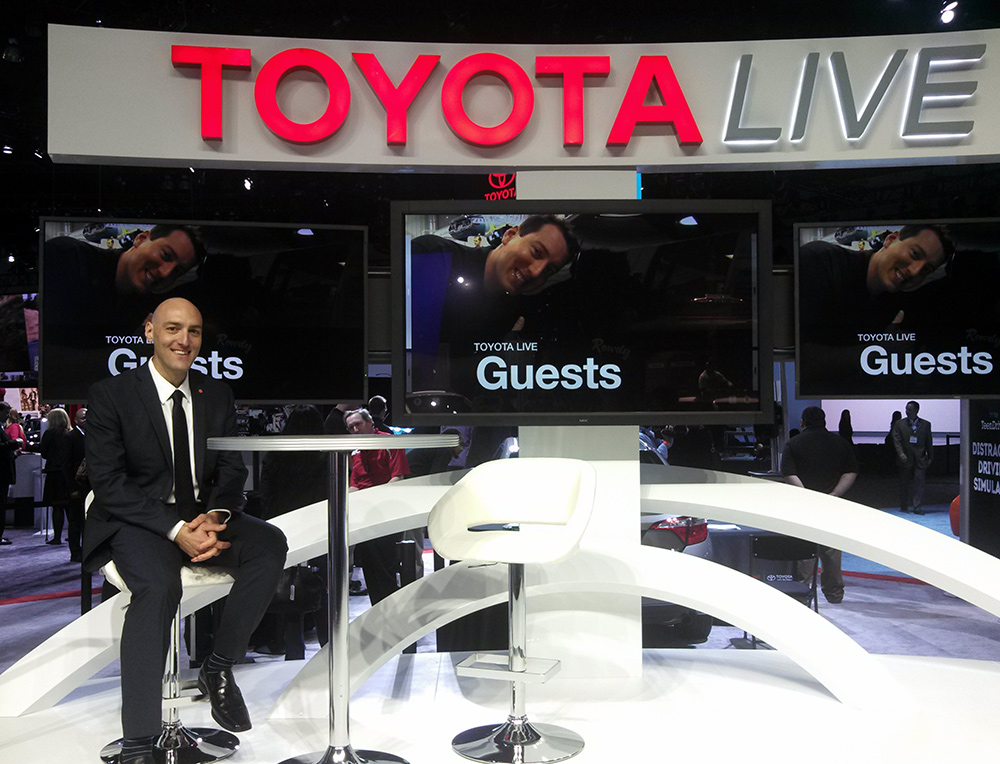 Alumnus Stuart Fingerhut on the Toyota Live stage at the L.A. Auto Show.

Stuart Fingerhut, associate creative director at George P. Johnson experience marketing firm, is gushing over the thrill of seeing people engage with his first big car show exhibition for Toyota and Scion. We caught up with him during the L.A. Auto Show media preview days leading up to today’s public opening. “This is like completely bonkers for me,” he says. “As a designer, it feels like the pinnacle.”

“We’re telling the story of the brand in a physical space,” the Art Center Environmental Design alumnus explained about the design that will travel to other car confabs including Detroit, Frankfurt and Tokyo in 2014.

Fingerhut is the new kid on the block at the firm where he recently joined teammates Sandamal Silva, an Environmental Design alumnus who designed the Infiniti space and Joel McCall, a Transportation Design alumnus who created the Nissan exhibit.

Of course lots of cars are spread around the Toyota and Scion space including a race car on a pedestal surrounded by large-scale murals and hanging video cubes. A giant replica of the company logo hangs from the ceiling above the Toyota Live stage where audiences can take a load off on red leather topped benches featuring the all critical charging stations for attendees with low battery woes.

Additional points of interaction include:

Toyota’s pitch to the press was focused on their efforts to make driving safer. A highlight was a presentation about how drivers and vehicles will soon work together as a team building trust over time and resulting in a safer driving experience.

With nervous parents of teens about to hit the road in mind, the car maker launched TeenDrive365, a driving safety platform to help families navigate the critical first year of a teen’s independent driving. It may be worth the price of admission just to have your teen try out the simulator programmed to create a car crash resulting from distracted driving.