Jake Viramontez was busy making documentaries until a contest announcement, sponsored by Chevrolet, calling for spec commercials tying family cars to Mother’s Day inspired him to expand his portfolio into a genre best described as doc-style promotion (aka the heartwarming, triple-hanky TV spot).

He quickly settled on a concept — a dad takes his crying baby out for a joyride in the family Chevy to give mom a moment to rest — derived from his sister’s bout with new-parent fatigue. He then submitted the idea and was picked as a finalist among nearly 300 entries from 34 countries. Now Viramontez’s spot, ‘The Extra Mile,’ will air on Mother’s Day during The Today Show and Good Morning America. “We chose ‘The Extra Mile’ because it’s a beautiful tribute to what Mother’s Day is all about: a day to honor mothers and show appreciation for all of the special things they do every day,” said Paul Edwards, vice president, Chevrolet Marketing at General Motors.

Trained as a documentary filmmaker, Viramontez was nervous about making his commercial debut. But the industry heavyweights who advised him throughout the creative process helped calm his nerves: Jon Landau, the Academy Award-winning producer of Titanic and Avatar, and Linus Karlsson, one of the advertising industry’s most respected and honored creative executives served as his go-to tag team of mentors.

The Dotted Line tracked down Viramontez on the eve of Mother’s Day weekend to get the lowdown on shifting gears from documentary to commercial filmmaking, the importance of marshaling mentors in high places and creating a narrative arc in 60 seconds or less.

TDL: Tell us a bit about your background and creative influences.

JV: I started creating documentaries when I was 16 with a rented camera from my high school. My first documentary was on my dad, a firefighter, and his crew. I stayed with them for 3 days and created a story called Behind the Flames. And after winning a handful of awards at local festivals, I decided to make a lifestyle out of it.

Since then, I’ve created documentaries in more than 15 countries on various social issues. In 2009, I was accepted to Art Center and my filmmaking experience went into fast forward. I graduated in 2012 with a degree in Film Production and continued my documentary path toward my first feature length doc, which is currently in production. The spirit of Werner Herzog and the boldness of Errol Morris have always inspired me. I’ll watch anything they do. For the Chevy Mother’s Day commercial though, I was moved by Apple spots, and the fluid nature of the camera without feeling too sentimental.

TDL: What stood out as most significant about your time at Art Center as an undergraduate film student?

JV: Art Center was incredible in the sense that it was very experiential. What I mean by that is, we didn’t sit in a classroom all day talking about films and writing papers on films. We were given film assignments each week with a prompt that sent us off creating. That mentality of creating a short film on a tight timeline with no budget was incredibly helpful as I set out to create this commercial in a low-budget, short time frame type of environment.

TDL: Did you have a career plan to pursue commercials, or was this a fluke?

JV: Commercials have always fascinated me. I guess I fell in love with the idea of attempting to tell a captivating story in 30 seconds, or a minute if you’re lucky. Can I create an honest arc in 30 seconds? Commercials, to me, always felt like a true storyteller’s challenge. I hit a point where I felt like I wanted to create content that was less ‘documentary’ and a little more ‘cinematic.’ And commercials seemed to be a perfect outlet. So, I saw the Chevy brief through MOFILM and decided it was time to dive into that experience. 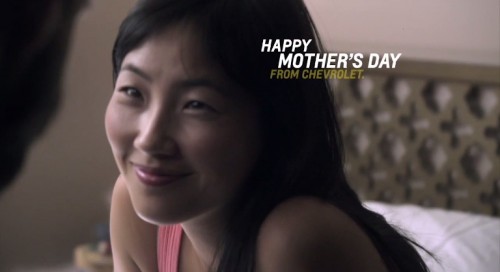 TDL: What was the creative brief?

JV: The brief –  A life worth living is a life that is shared. Often our most genuine moments are those that allow us to connect with others yet, they are so easily overlooked. They are the significant ones, disguised as the small ones. It’s the moments where we are needed, and we need others. Where we love and are loved. Where we laugh together, cry together, have new experiences together, belong together. Make a film that shines a light on a simple yet significant human moment. Not a ‘life’ moment but a moment in life where you truly connect with someone else.

My end result: A young mother and father wake up to the sound of a crying baby. The mother begins getting out of bed as the father stops her, consoles the baby and sneaks out of the house to the Chevy Equinox sitting in the driveway. The father and daughter go on a magic ride through Downtown Los Angeles. Tall buildings and bright lights excite the baby and keep her happy. The dad opens the sunroof to reveal a shooting star. He turns off the main road to a windy road that leads to a lookout point as the two watch the sunrise over the city together. Contented, he heads home. We cut to the mother waking up back home; she looks to the doorway to see the father happily walking in with a breakfast tray complete with coffee, parfait, and a baby monitor revealing the baby fast asleep. The mother looks upon her husband with a deep appreciation.

TDL: What inspired the concept for the commercial?

JV: I was on vacation with my sister and 18-month-old niece and I noticed how much my sister’s life revolved around the baby. The only time that she could truly relax and rest was if the baby was napping. My brother-in-law is a great dad and husband, but I think there’s always room to grow as a provider and a lover. So, my sister and I began brainstorming the commercial concept together while on that vacation and she essentially ideated the original concept. She said, “You want to know what a perfect morning would look like?” She went on to describe a hypothetical that ultimately laid the foundation for the commercial. The idea went through several rounds of refinement before becoming what it is today.

TDL: Are you a father?

JV: I am not a father, nor have I actually been in the father’s shoes. I am, in fact, getting married at the end of the month though, and believe me, I’m sure when the day comes, my fiancé will remind me of this spot. In a way, it’s a declaration of who I choose to be when I am a father as well as a call to action to all fathers out there.

TDL: How did you feel when you learned your concept had won approval and was going to be made in to a commercial?

Honestly, I felt nervous. Not only did my idea get approved, but it also got selected as one of the few films to be “mentored.” I found out that the mentor who had chosen me was Jon Landau, the producer of Avatar and Titanic. I guess if you’re going to create a commercial for the first time, it’s nice to have someone like Jon Landau guiding you through the process. On top of meeting with Jon, Linus Karlsson was in the room. Linus is the creative director for Chevrolet and one of the advertising industry’s most respected and honored creative executives. So, to say that I was conceptualizing with heavy hitters is a gross understatement. I met with Jon and Linus and we hashed out my concept at Jon’s production studio. I fought for the ideas that I was adamant about and changed the ideas if I thought they were better. And at the end of the day, it was an amazing experience. That one meeting expanded me exponentially as a human, not just a filmmaker. After the meeting, I told myself: “You better knock this out of the park, because clearly this concept is strong.”

TDL: What were the challenges as you navigated the creative process?

JV: The agency, MOFILM, gave me a lot of autonomy as storyteller. They were very hands off creatively, which allowed for an enjoyable process. My main struggle was that I only had $4,100 to make the entire spot, start-to-finish. So my creativity was not just in terms of how to craft the story but also how to actually make it. Lots of people took a chance on me because they knew that this was my first commercial out of film school and I was looking to make a name for myself. What I have realized, is that if you are a good person throughout life, it makes asking for favors a lot easier. If people already like you, then they’re more likely to help out, which sounds obvious, but it was very noticeable throughout the whole process. It’s not just about being a beautiful person when you need a favor; it’s about being a beautiful human when you don’t need anything in return.

Also, because of the tight budget, I had to film the entire thing in one day which created difficulties of its own, but when I was able to sit in the edit room and look back, I could smile with satisfaction at the tenacity of everybody involved.

TDL: What was it like working with the actors?

JV: Since I wasn’t allowed to cast any SAG actors, I had to switch things up. I was looking for a diverse couple, and a baby that looked like it could realistically be theirs. As time went on I started getting more stressed that the couple with the baby wouldn’t seem truthful, and I was sure it was going to ruin the whole spot. Finally, I was talking with my DP, and we thought… what about Hank and Sueann? They’re friends of ours who are married and have a two-year-old daughter of their own. Even though they had never acted in anything before I called them and assured them that I would make them look good. I promised them that at the very least, they would have a fun family video to look back on in 15 years. We shot it, and they did an absolutely wonderful job. So, if you’re wondering why the whole family has such great chemistry, it’s because they’re an actual family.