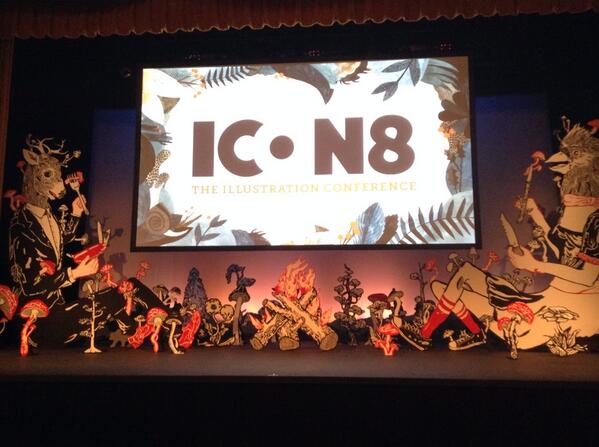 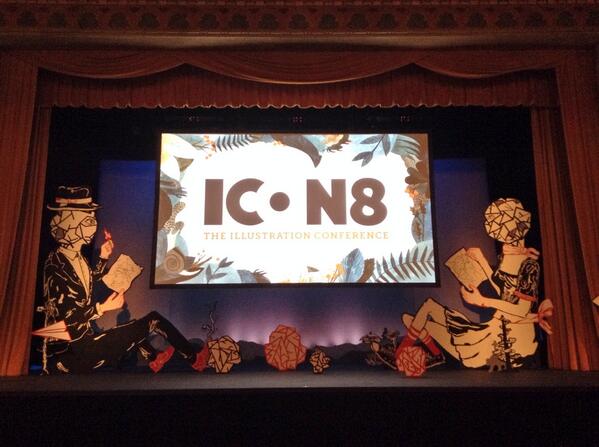 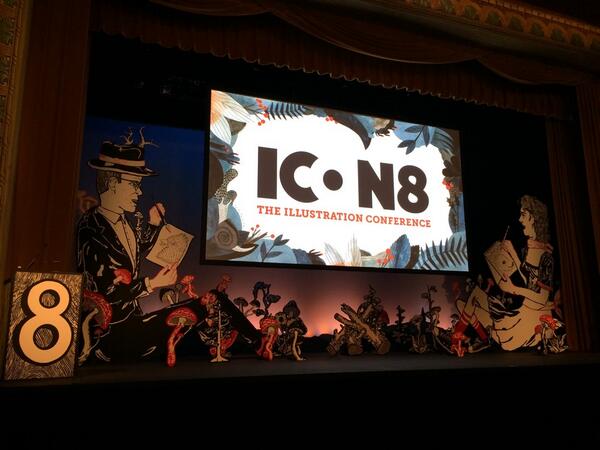 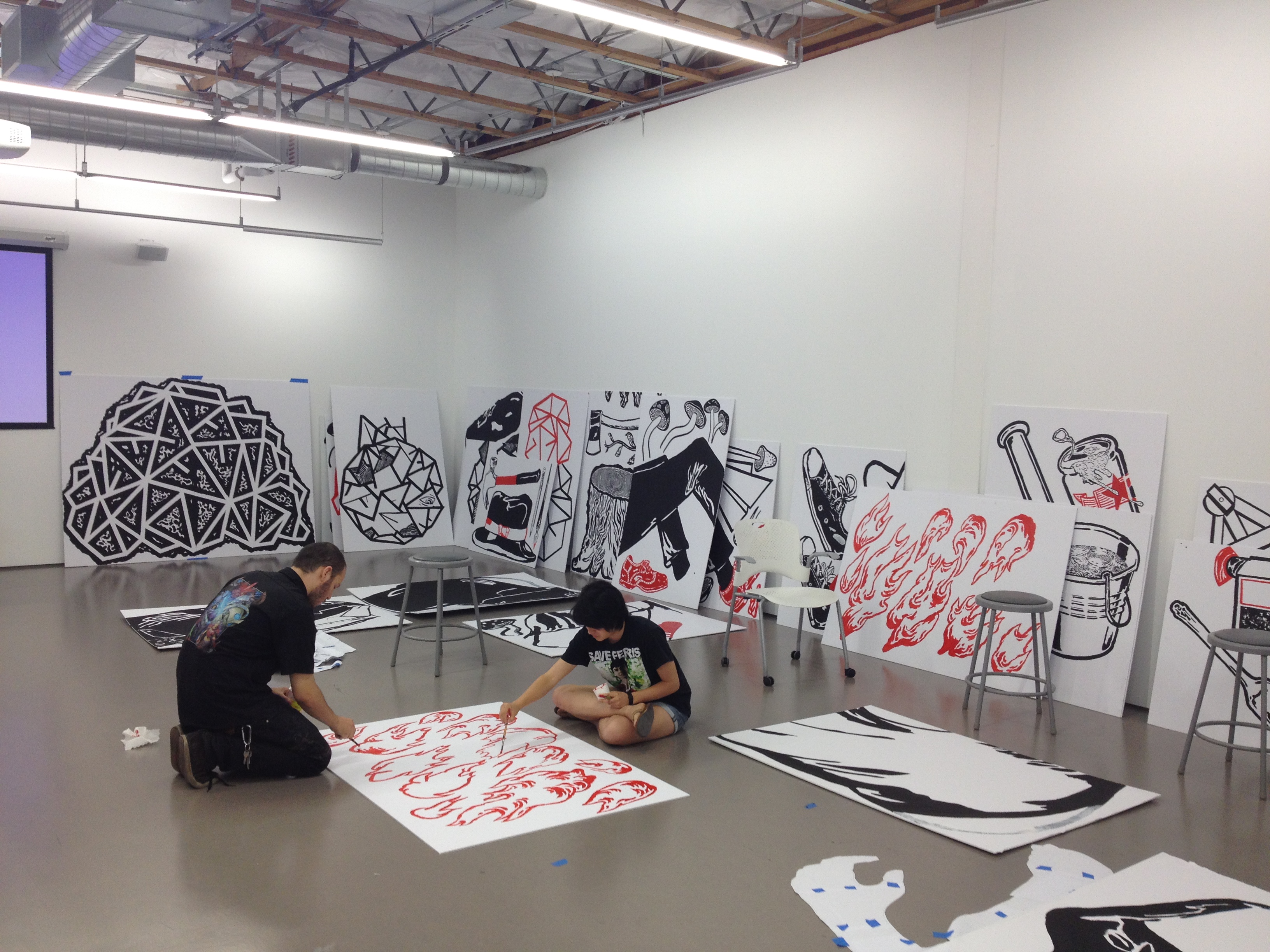 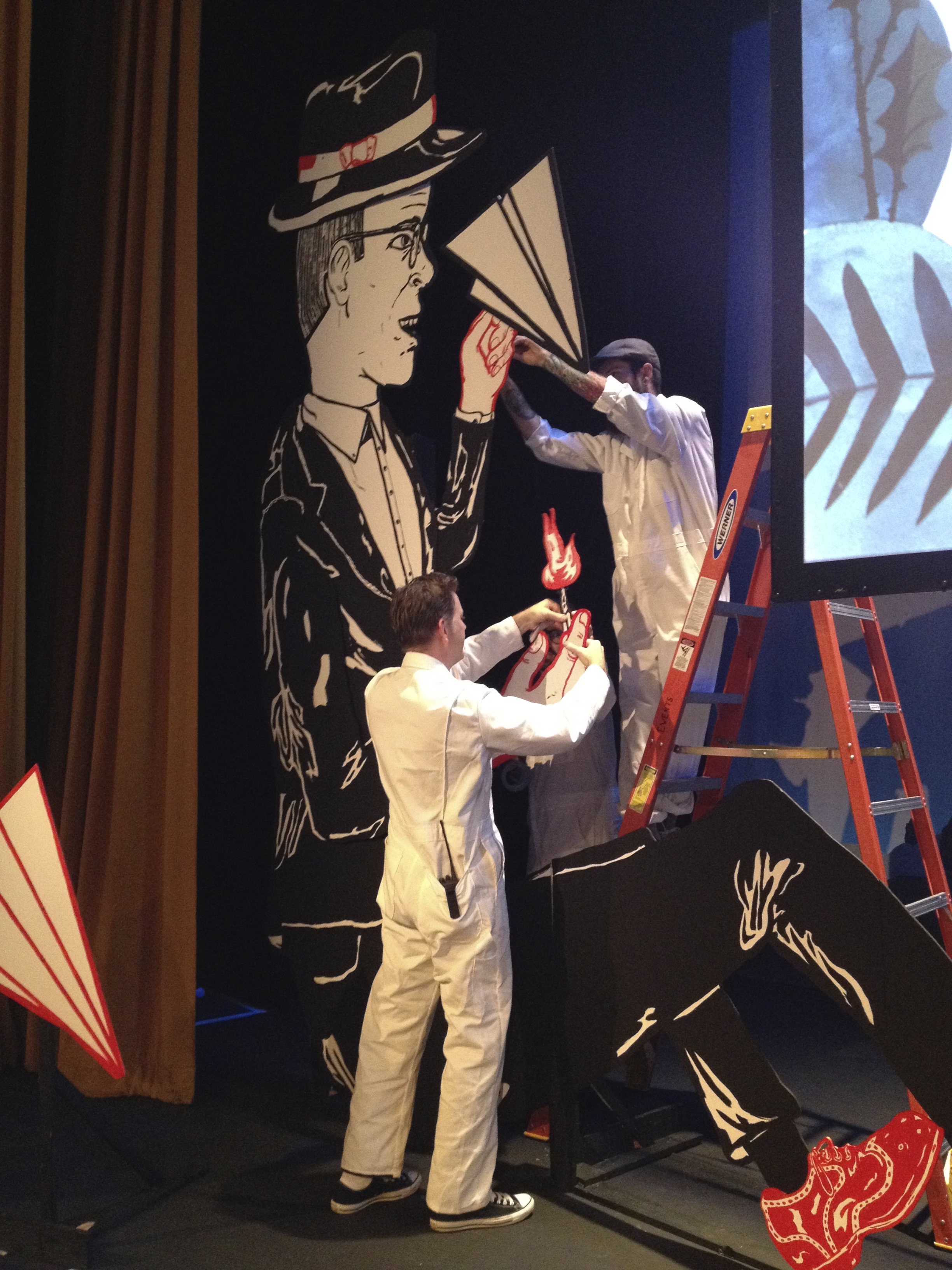 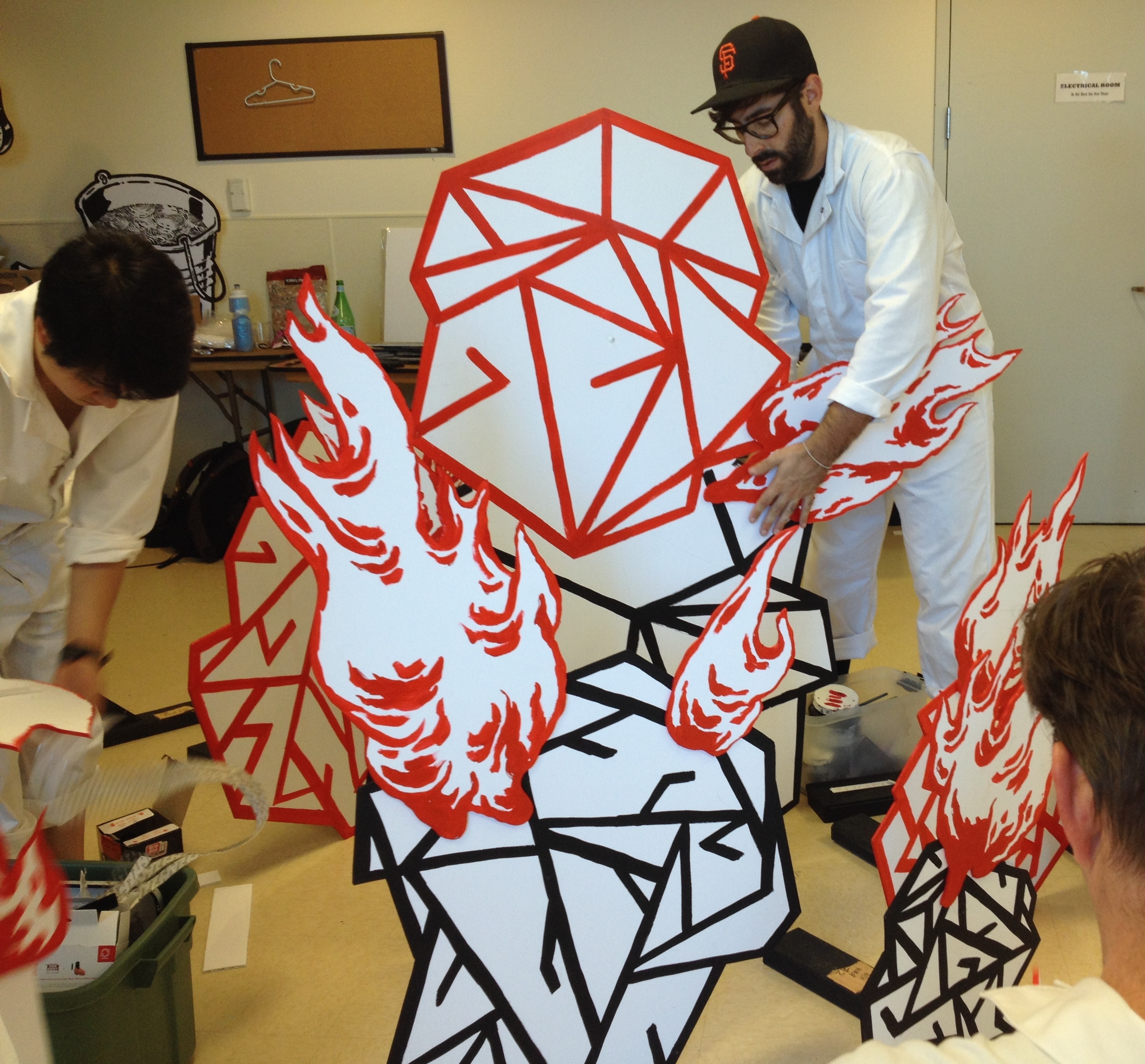 Team Holley behind the scenes. 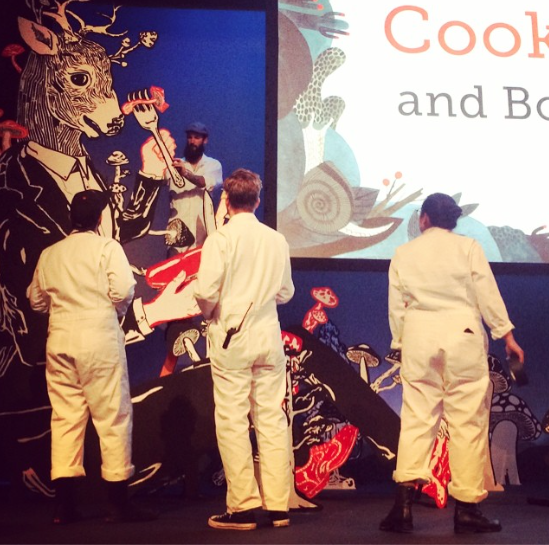 The epic effort required many hands. 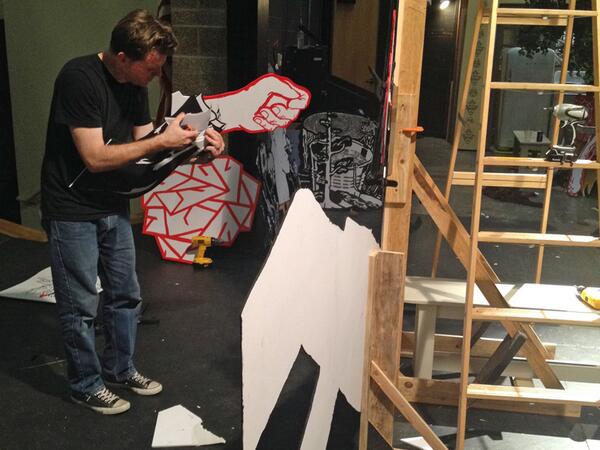 A stage design like none other at the Portland Art Museum.

A sell out crowd squeezed into the Portland Art Museum earlier this summer to experience ICON8, the world’s premier illustration conference, where Art Center leaders dominated the spotlight. More than a year in the planning, ICON8 is a must-go event for anyone serious about illustration and eager to mingle with all the key trade influencers.

Just being invited to speak is an honor in the illustration world, on par with headlining at SXSW, screening your film at Cannes or showing your classic wheels at Pebble. Organizers, who aim to amaze, inform and inspire, select only the top illustrators, designers, art directors, educators, reps, publishers and makers to occupy the main stage or lead workshops.

This year’s keynotes included branding rock star Paula Scher, a principal in the New York office of the distinguished international design consultancy Pentagram, and Damian Kulash of OK Go, known as “the first post-internet band” at the forefront of an emerging class of independent creative entrepreneurs making art in both digital and physical spaces.

At least 16 faculty and alumni shared center stage at ICON8 with several current students and many other Art Center family members, who individually contributed their talent and energy to help make the event a success. Art Center peeps were also critical to the event’s planning and execution, managing the event down to the last detail.

Attendees were particularly awed by the work of Illustration faculty member Jason Holley, an ICON board member, who did a stupendous job of creating hand drawn/painted full-size props that morphed and changed throughout the event on the main stage, in an epic effort born of little sleep and herculean powers.

Former art director of the Op-Ed page of The New York Times Brian Rea, who draws for the Grey Lady’s popular “Modern Love” column and serves as an Art Center adjunct associate professor, created a tape mural that greeted attendees upon entering the main event room. Design Arts Daily featured Holley and Rea’s work in a recap of the happening by Ellen Weinstein, ICON8 board president.

Among the many conference highlights were Robert Priest and Grace Lee, founding partners of Priest+Grace, an award-winning design company in New York, who described the thinking behind creating covers for the newly re-launched print edition of Newsweek, as well as the process of creating their new, self-published, quarterly soccer magazine Eight by Eight and their collaboration with illustrators when running about 25 full-page illustrations in each issue, including the cover.

One of the new topics discussed by attendees this year was illustration and design for social impact. Illustration department Chair Ann Field and faculty member David Tillinghast showed how it’s done by presenting Uncool: The Anti–Gun Violence Project, produced in collaboration with Designmatters.

Recent alumna Ariel Lee (BFA ’12) presented her book Mark and the Jellybean Monster, which was a winner in Design Observer’s 2012 50 Books/50 Covers; and Cassie Zhang, a currently enrolled student, talked about her experience with Designmatters.

The Clayton Brothers presented their work in the context of life’s strange beauty, the absurdity of fear, the neighborhoods around our lives and the idea of acceptance.

Jason Holley and Lisa Wagner who have been collaborators since their first date to a decommissioned prison in 1995. The duo are now married and ensconced in suburban L.A., where they’ve turned their home into a live/work compound for clients, kids and chickens. Their latest project is an experimental book that began as a children’s story written by Wagner’s father.

Twin brothers Aaron Smith who is the associate chair of the Art Center Illustration department and Owen Smith who chairs the Illustration department at California College of the Arts, both find inspiration in history and culture, but have managed to develop individual artistic identities. They discussed the effects of upbringing, temperament and obsession on the development of artistic style and content. Their careers encompass illustration, fine art, public art and art education.

Other presenters included faculty Brian Rea, alumnus Calef Brown, alumnus Souther Salazar and recent graduate Kelsey Dake. “We should all really be talking to each other more often, to help reach new levels of education, push the profession,” said David Tillinghast, who met with peers in higher ed from the UK and Poland at ICON8’s first ever Educational Symposium.

The conference is educational and inspirational, not only for those in the field, but also art directors and educators, and for students in programs from around the United States. It reflects the way in which illustration is extending itself well beyond traditional boundaries to embrace fine art, self-publishing and entrepreneurial ventures.

What is the draw to this field anyways?

At Art Center, the Illustration department continues to be a large draw for enrollment, Tillinghast believes, because of it’s emphasis on the imagination and voice of the individual, and particularly because of the varied and broad career arcs of its graduates.

Alum Ping Zhu, who also currently resides in Brooklyn, is riding the crest of a highly successful freelance illustration career, and her clients include The New York Times, Pentagram, The New Yorker, The Independent, Pushkin Press, Hèlium and Nobrow Press. She was recently honored as the recipient of the Art Director’s Club’s prestigious Young Gun award, presented to people under 30 making an impact. It’s highly unusual for an illustrator to walk away with this award since it is usually presented to a design professional.