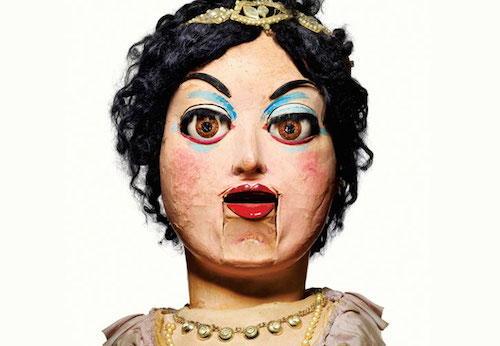 The following story originally appeared in Art Center’s Fall 2014 Dot magazine, where you can read more about alumni and faculty achievements.

If you’ve seen photographs of Oprah Winfrey or covers of Rolling Stone, it’s safe to say you’ve seen Matthew Rolston’s work. His 2007 shoot with Michael Jackson is known as the singer’s “last sitting.” In fact, you almost can’t name a pop star Rolston hasn’t photographed or directed in a music video.

Tapped by Andy Warhol early on to shoot for Interview magazine, Rolston this summer presented a series of monumental color portraits (5 by 5 feet) at Diane Rosenstein Fine Art in Los Angeles—not of celebrities but of ventriloquist’s dummies—adopting the square format Warhol was working in when the two first met. Rolston discovered these unconventional entertainers at the obscure Vent Haven Museum in Kentucky (“vent” being short for “ventriloquist”), where he painstakingly selected from hundreds of figures in a collection dating back to the 19th century. “The faces that spoke to me most had expressions that I found enigmatic, pleading, Sphinx-like, hilarious and disturbing.”

Acknowledging the “creepy” nature of the subject matter, the Los Angeles Times credited the work with “holding a mirror up to the ways in which we categorize and stereotype.” Talking Heads: The Vent Haven Portraits (Pointed Leaf Press) gathers 100 of the pictures, along with two essays. Creating another kind of impact here at his alma mater, Rolston established an endowed Art Center scholarship for students in photography and film.

The Grad Film  department will host Rolston as its inaugural Visiting Artist throughout the week of December 1-5. During his visit, Rolston will screen and discuss some visually-influential films; lead a select group of students on a tour of the Haunted Screens: German Cinema in the 1920’s exhibit at LACMA; introduce Art Center students to the exciting (and lucrative!) world of fashion and luxury-brand films; and meet with students individually to discuss their work and how to improve and enrich their own visual aesthetics.