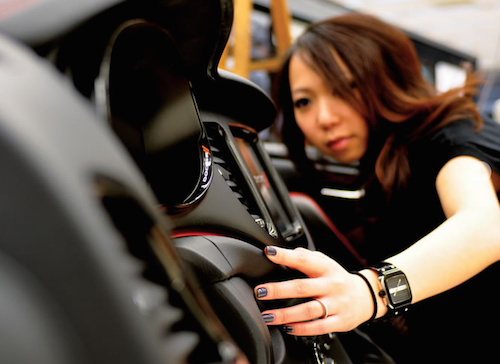 Car design prodigy Winnie Cheung—so dubbed by Automotive News in its 40 Under 40 list of the industry’s current crop of early achievers—is interior design manager for Chrysler Group headquartered in Auburn Hills, Michigan. The magazine likened the young titans who made the cut to the legendary Lee Iacocca who, at 36 in 1960, was the youngest vice president in Ford Motor history.

Cheung has come a long way since first entering Art Center as a Product Design major. Back then, she admits, the thought of drawing a car made her nauseous. But after her first assignment she fell in love with the mobility art form and transferred to Transportation Design.

Chrysler is responsible for some of the world’s most recognizable vehicles, from the Town & Country and Jeep Grand Cherokee to the SRT Viper and Fiat 500. Cheung strives to design cars like a living space with interiors that are simple and aesthetically pleasing. Her interior for the thoroughly revamped 2013 Dodge Dart was praised as “an explosion of modern, edgy and stylish.”

She joins a growing club of Art Center alumnae creating the spaces we drive in, including Transportation alums Felicitas Steinbrecher (BS 13) at BMW, Tisha Johnson (BS 99) at Volvo, and Christine Park (BS 06) at Cadillac; and Environmental Design alumna Kimberly Marte (BS 97) at Tesla. Cheung’s advice to up-and-comers: “Stay true to yourself and believe in your ability.”

This story originally appeared in Art Center’s Fall 2014 Dot magazine, where you can read more about alumni and faculty achievements.