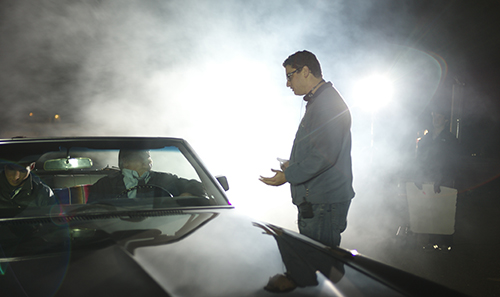 Spring brings the arrival of many things. Swans pursue the thawing lakes in the north. Leaves return to barren trees. And film moguls descend on the white beaches of Cannes for premiers and deal making. This year, alum Elran Ofir (Grad Film 14), will be one of the fortunate few whose film will be included in the Cannes Short Film Corner, a special section for filmmakers to gain access to industry meetings, workshops and conferences on strategic issues.

The short, Blake Chandler: Psychic Investigator, written and directed by Ofir and produced by current Film student Jean Kim and Michael McDowell (MFA13 Grad Broadcast Cinema), was Ofir’s thesis at Art Center. It’s a comedy about a paranormal private eye plotting revenge on the ghost of his former partner. While Blake sets out to get retribution in another dimension he ends up finding love in the real world. This twist of fate is similar to Ofir’s own experience developing the film. “I was working on another project for three years and I didn’t feel anything was working. It was Paul Guay (Film faculty) who sat me down and ripped my script apart, figuratively and almost literally. It was the best thing that could have happened.” He regrouped, put together a crew of Art Center peers and shot Blake shortly thereafter.

Ofir had filmmaking, and Art Center, on his radar for a long time. He was nine years old when he saw Jurassic Park and couldn’t sleep for a week. Then, when his film teacher, alum Doug Claybourne, took Ofir’s ninth grade class on a tour of Art Center he knew immediately where he wanted to study film.

“I would love to come back and teach… I really admire how Matthew Rolston (Photo BFA 78) has contributed to the Undergrad Film Department, giving scholarships and some advisement as well.” In the meantime he’s focused on Cannes, and we’re looking forward to the surprise ending that the premier could bring. “Unrealistically, I hope some producer sees the movie and gives me carte blanche on a mega million dollar movie. Realistically, I’d love to meet a ton of people and build my network.”