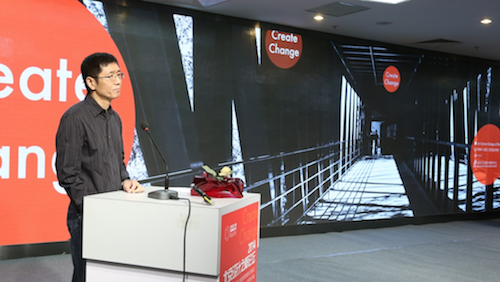 Mr. De Liu, Co-founder and Vice President of Xiaomi Inc., graduated with a Master’s degree from Art Center College of Design in Industrial Design. Because of his outstanding academic performance, top U.S. universities began to cast their eyes at emerging design talents in China. As the saying goes, “it takes a decade to sharpen a sword.”

It was a long and arduous grind for De Liu to grow from being an ordinary designer to his current position as a successful business leader and entrepreneur. De Liu will share his experience as a designer and entrepreneur at the Create Change Design Forum to be held from September 19 to 20, 2015. Visit www.accdchina.com for more information.

Now let’s take a peek at how his Art Center design education impacted his professional ascent as well as the development of his personal abilities.

Question: Could you please tell us something about your personal career growth and development?

De: I studied industrial design. Actually, I was one of the few who had an earlier start in the design world at that time. Now there are very few of my contemporaries who stayed with their early design career. In those days, if I wanted to develop further with my design major, I had no choice but to become a university teacher. So I went straight ahead to join the University of Science and Technology Beijing (USTB) after completing my postgraduate study at Beijing Institute of Technology. When I was teaching, I also started a design company. For those whose major was design at that time, it seemed I had already found my happily-ever-after ending. The reason why I went abroad to study was that I began to realize that being a teacher in China had limitations from a general perspective. Given the development of China, we still lagged behind in professional design. It made more senses for me to study abroad rather than to simply wait for overseas designers to come to China. Moreover, people in my generation generally had a dream to continue their studies overseas.

I went to Art Center College of Design in 2003 after teaching for two years at USTB with money that I earned in my company. After completing my studies at Art Center, I still wanted to establish a career of my own, so I worked with my colleagues and friends in the U.S. After that, I had the opportunity to make smart phones. Lei Jun was then assembling an entrepreneurial team and we hit it off. Upon my return from the U.S., I got started with Xiaomi. At that time, there was no such role for an industrial designer in Chinese company. The failure to bring in design in the early stages of a company’s development causes many wrong decisions and directions. Xiaomi was the first company to understand the value and importance of design, and this is one of the keys to our success. My experience in the U.S. at Art Center College of Design also laid a good foundation for my entrepreneurship at Xiaomi. So I was given many opportunities. Surely there was also my own choice. It all depends on what life you want to lead.

Question: Could you please talk more about the design systems education provided by Art Center?

De: As I see it, Art Center is the best design school in the U.S. Its undergraduate program is purely based on design while the postgraduate program merges design and business. Since I had experience of running a company and a commercial mind, this kind of education system suited me well. In my own opinion, I have benefited from Art Center in two important ways. First, the design education we receive in China leads to the belief that a person’s competence and skills for design cannot be measured—we are taught to rely on our personal senses. The education system of Art Center, however, makes them measurable, which means that my design skills have greater value and power in the business world. Second, Art Center is a business-driven school. It focuses on commercial planning apart from merely doing a good design or product. In this regard, the school is more professionally oriented, and thus is able to provide education with more insight for its students. This is a big difference from design education in China.

Question: In the years when Xiaomi was being established, how did you apply your knowledge to the Chinese market?

De: It has been a decade since I studied at Art Center. I could only say that in our real practice at Xiaomi, sometimes our inspiration derives from our previous education. But we also go beyond our education at Xiaomi–what we do now is really fast and new. I think what Art Center has taught me is more like the ability to solve problems and answer questions more wisely.

Question: In Xiaomi’s product design, how do you direct the users’ consumption habits?

De: Firstly we need to figure out what users’ consumption habits are. Xiaomi focuses on the interactions with the users, that is why we are able to seek out and understand the real demand of people. For example, we already have seventy or eighty million active users. It is through research and interaction that we are enabled to understand users’ needs. During the initial phase, these needs were inside the customers’ mind. Then we made these needs explicit by putting them into our products. Then we realized our users would find the functions awesome! To put it simply, it is a process in which we respond to potential needs in a more direct and swift way, by making the needs explicit by means of design. When the product is delivered to customers, we receive great recognition. I think the Internet provides a great channel for communication with users.  Whenever Xiaomi launches a new product, numerous people try it out and then provide comments and feedbacks through the Internet. This is how we find out the demands and needs. Everyone can do it and it is not exclusive to Xiaomi. But we have built our business on the Internet.

Question: Will foreign education models have adaptation problems when introduced into China?

De: Yes there will be problems of adaptation when it comes to education, in particular for design education. In general, designers are the pioneers of the society. For example, in my years at school, when there were foreign teachers coming to give lectures, I would be extremely excited, because I knew there would a great deal of new information to learn. Education is a field where the issue of adaptation is not a concern as long as it has reached a very high level. It works in the same way as the flowing water. When the water reaches a certain height, it will rush down vigorously. But there are some key differences between U.S. education and Chinese, such as the admissions system (U.S. design schools look at your portfolio), government administration and policies. Unlike the U.S, there are very few private schools in China. For the Chinese, private school education is rated at the low end while for American it is the other way round. This is a really big difference. When it comes to art and design schools, in China students who fail to be admitted by “decent” universities will go to an art and design school. But in the US they choose art and design schools based on their skills and professional ambition. Furthermore art and design schools are the most expensive among all U.S. colleges and universities. These are the big differences between the two countries in design education. The so-called “adaptation” issues actually refer to these aspects rather than education itself.

De: Today, design is given a lot of attention from the government as well as society at large. People are starting to have an awareness of design. This is really good. Companies also take design seriously as they have discovered its significance as a competitive advantage. For instance, if a mobile phone does not look attractive or have a good design, it tends to have a rather poor market share. In this sense, this is a really great time for designers. Furthermore, the broad coverage of the Internet and the technical foundation of E-commerce and 3D printing have further facilitated the presentations of designers’ works. When a piece of design has been completed, it can be immediately printed up and put on sale on the Internet. However, it is wrong to deify design or to go too far in touting it. There is a trend of believing that designers are extraordinary, and that innovation is everything. I think it is a bit overstated. We should always treat design just as the way it is. Designers are supposed to produce good overall quality and be comprehensive in their thinking. They need to have a certain depth of insight, for they are not only craftsmen. Craftsmanship, of course, is still the basic quality of designers. If a designer fails to be a craftsman, it is rather hard for him/her to do anything else. On the other hand, a craftsman, when he has mastered his craft, should know how to communicate with people and cooperate with various technicians to put his/her design precisely into a social framework. It is essential to think in what way the design work of a company should function. To overstate or understate it will both be harmful to the company.

Question: As many Chinese designers have become entrepreneurs, what suggestions would you offer them?

Liu: Last year, or maybe this year, can be counted as the Year Zero of entrepreneurship for the Internet, smart hardware and design industries in China. It is good that a vast number of young people have carved out a career of their own, perhaps inspired by Xiaomi, which also makes me feel really gratified. My suggestions are simple. First, before starting, you should check out whether you are suitable to become an entrepreneur. If you are, just do it. You should have a clear understanding of yourself, a clear self-evaluation. Second, risks are high in entrepreneurship, and you should be fully aware of that. Third, in which field would you like to start your company? Is it a region familiar to you or is it at the forefront of the times? If so, things will become easier. If not, you will bear more risks. Last but not least, I do not support premature ventures because the prospect of success is rather low when someone rashly establishes a career upon graduation without any social experience.