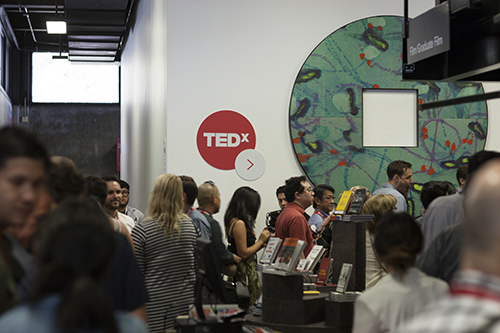 The crowd outside the Ahmanson Theater.

ArtCenter College of Design has red balloons on its roof, Hot Wheels are being handed out at the entrance and throngs of students eagerly wait in the hallway. This is not a child’s birthday party; it’s ArtCenter’s TEDxACCD – a unique event where alumni and faculty speak to students and guests about their specialties.  For over 25 years, TED (Technology, Entertainment, Design) has provided a platform for some of the most cutting edge conversations of the day. As a world-class art and design school committed to learning to create and influence change, TED offers a natural compliment to our goals.

When you work at NASA the things you overhear in the elevator aren’t the usual corporate jargon. “We need some dark energy guys.” or “Put Pluto on the calendar this week.” But that is what ArtCenter Product alum Jessie Kawata, Creative Strategist at NASA JPL, tells us she overhears while working with her fellow rocket scientists. 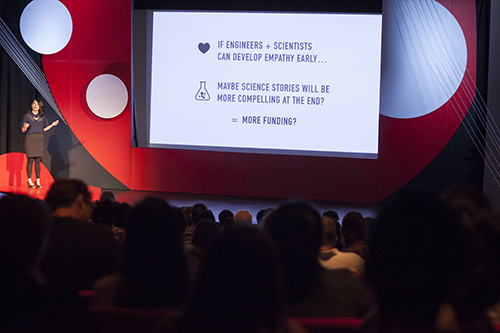 At NASA, Kawata oversees the design of things that get launched into space; her message to students at ArtCenter is that creative minds can improve their projects through failure. She helps scientists in the early stages of their designs so that they can have a clearer picture of what they want to build. How does she do this? Naturally, with Popsicle sticks. Why? Because when scientists make designs with glue and sticks they aren’t as emotionally attached to their creations and are more open to allowing for failure. For Kawata, helping them fail big, and often, is success and will help them come up with better designs in the long run. 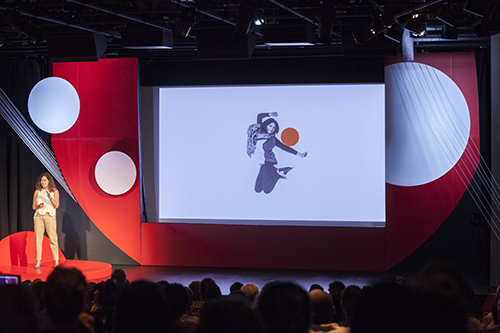 ArtCenter alum Youmna Chamcham spoke next about her social media campaign and website, Live Love Beirut. The campaign, which promotes love and positivity towards Lebanon, began when she was a student at ArtCenter.

When people would post with #LiveLoveBeirut, she’d send them a bracelet with the same hashtag written on it. 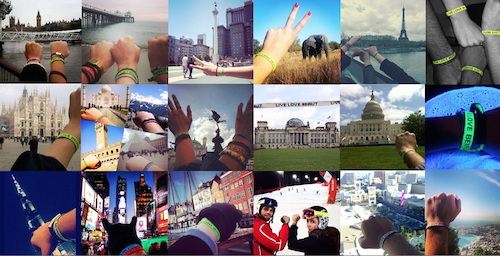 Soon the website and the hashtag had become an Internet phenomenon. Now, with millions of followers, she is selling bracelets in dozens of countries and partnering with local NGO’s to promote well-being in her home country. The only problems she’s encountered were design differences with her uncle back in Lebanon, who had been tasked with making the bracelets, and crossed a line when he used Comic Sans font.

Live Love Beirut isn’t just a hashtag. By promoting Uber drivers who would take garbage to landfills they were able to have a visible impact on the landscape. When they promoted community service days it resulted in record participation for clean up. The campaign now has more than 4.1 million followers on Instagram and is growing everyday.

The TEDxACCD had many other brilliant speakers. ArtCenter faculty Guillaume Wolf talked about “How to change the Future” (video below) and Miriam Lieu talked about moral leadership and it’s impact on choices we make.

“It would be kind of unfair and really tough to name a favorite,” said ArtCenter Film student D’Angelo McCornell who helped out with the event. “I’m happy to be involved.”

The takeaway for students and participants was that big things start small. If you want to travel to the furthest reaches of the solar system – your best design solutions start with Popsicles. And if you want to clean streets of Lebanon from thousands of miles away, a hashtag and a photo can start the process.