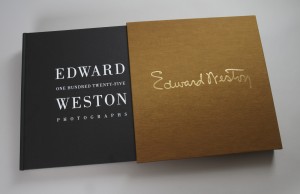 The cover of the new Edward Weston monograph, published by AMMO Books.

On campus, Gloria Fowler ‘87 may be best known as a beloved Environmental Design instructor who has taught at the College for the last 20 years, helping students explore their creative potential. But equally impressive is her work off-campus, where she runs the thriving boutique art-house publishing company AMMO Books with her photographer-turned-publisher husband, Steve Crist, and business partner Paul Norton.

Launching a specialty book business is a risky venture, even more so in today’s age of declining book sales. But AMMO, which is based in Pasadena and Santa Barbara, Calif., has succeeded where others haven’t, publishing a number of coveted titles including the limited edition monographs Gonzo and Charley Harper, mid-priced options like Locals Only and Spike Lee: Do the Right Thing and a children’s line of board books, puzzles and more. Enviable press coverage and robust sales have followed.

The Dotted Line recently sat down with Fowler to discuss several new AMMO releases just in time for the holidays, as well as her experience running AMMO and working with emerging talent straight from the studios of Art Center.

Is there a story behind the name, AMMO?

When Steve and I decided to break out on our own and launch a new publishing house [he previously worked as a photo editor at Taschen], we realized that there weren’t that many visual-arts publishers based in the U.S. We also wanted to celebrate American artists and designers. So we came up with AMMO, which is short for American Modern Books. But we do publish international artists/designers as well.

We recently published a limited edition, coffee-table size monograph on the photographer Edward Weston in celebration of his 125th birthday. Weston is a hero of Steve’s and one of the most important photographers of the 20th century. Steve worked with the Center for Creative Photography in Arizona, which manages Weston’s archive, to choose 125 of Weston’s most iconic photographs. The book was beautifully printed in Italy and comes in an exquisite European gold cloth slipcase. Then we have Alexander Girard, edited by Todd Oldham. Girard was a seminal and prolific midcentury designer who produced work in so many disciplines—textiles, typography, graphics, illustration, furniture and architecture. He was a contemporary of Eames who, for whatever reason, hasn’t received the same recognition. We hope this book will change that. It’s massive—672 pages and 15 lbs(!)—and it’s at the level of Charley Harper in that the book is a very comprehensive overview of Girard.  And in conjunction, we’ve released some children’s products featuring Girard’s designs—a memory game, giant floor puzzles, a board book and more on the way.

Catch a glimpse of the new Girard book here: