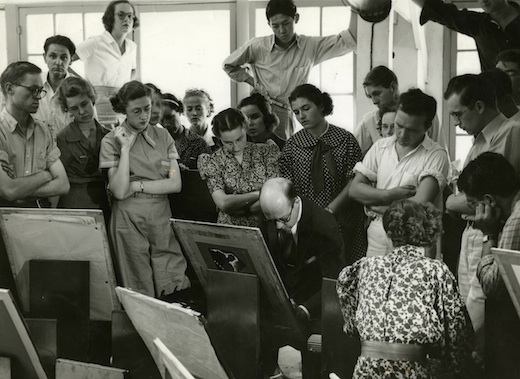 Students able to pull themselves away from their final projects for a few minutes will be rewarded with a rare look at items from the first chapter of Art Center’s history, when it was located on Seventh Street in Los Angeles’ Westlake District. Objects on view include: a 1941 catalogue for Art Center Center School, as it was then called; a number of photographs taken at the Seventh Street campus (including the image above); founder Edward A. “Tink” Adams’ business card, circa 1936; and a Caltech flyer announcing aircraft production illustration courses, which were offered at Art Center during World War II when the College ceased normal operations to assist in the war effort.

As for the exhibition title, the text on display in the Library explains, “The early catalogs boast, ‘No teachers! No grades!’ signifying that Art Center is not a typical school. That proclamation was not to say that it was effortless for students. From many accounts students were thrown out of the school if their work did not meet the Art Center standard.”

So much for the “good ole days,” right?