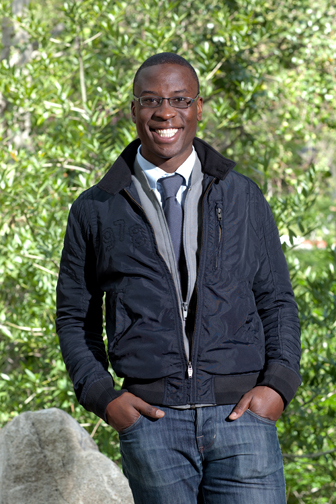 Environmental Design student Ini Archibong has been named Student Designer of the Year by Stylus and Bernhardt Design. The Stylus + Bernhardt Design American Design Honors are a new annual awards program developed to support the future of American product design. The American Design Honors will provide young designers with both exposure and financial support. Archibong will be honored by Stylus and Bernhardt at the 2010 International Contemporary Furniture Fair in New York next week.

“A few minutes after meeting Ini, you realize you are in the presence of someone destined to achieve great things,” says President of Bernhardt Design Jerry Helling. “His personal charisma complements his natural design talent—he has the drive, passion and commitment to sustain a long and successful career.”

Born and raised in Pasadena, Archibong began his studies at USC’s Marshall School of Business. He soon realized that he could not ignore his creative passion, opting to focus on fine art and architectural design. He worked for two years at George Architecture in South Pasadena, where he learned the essential skills of the trade and strengthened his application portfolio for Art Center. In 2007, he was accepted into the College’s Environmental Design program, and received both an Edwards Entrance Scholarship and an Art Center Outreach Grant.

During internships in San Francisco and New York with Eight Inc., Archibong was directly involved with designs for the Mankas Lodge in Inverness, a proposal for the Norwegian National Museum of Art in Oslo, as well as concepts and design for Nokia’s flagship stores launching in 2011.

Interested in the intersections of engineering, fine art and architecture, Archibong is influenced and inspired by the work of Alphonse Mucha, Santiago Calatrava and Buckminster Fuller. He will graduate in 2011.