This is turning out to be quite a week for Doyald Young.

Tomorrow night he’ll be honored at a special Art Center reception (RSVPs required) with a screening of Doyald Young, Logotype Designer, a new documentary about Young by lynda.com. 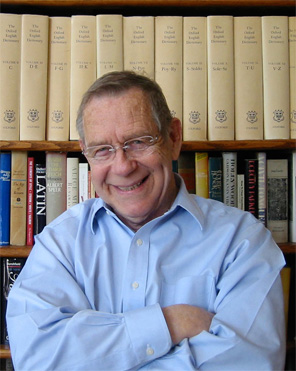 At Saturday’s commencement ceremony, he will receive Art Center’s Alumnus of the Year Award for his dedicated work as an educator and lifetime of legendary work in typography, logotypes and alphabets. At Saturday’s commencement, he’ll receive an honorary degree from Art Center, where he studied Advertising in the ’50s, and where he has taught lettering and logotype design in the Graphic Design Department for decades.

We caught up with Young this week to talk to him about Art Center, his thoughts on teaching and those things computers can’t do.

Dotted Line: Congratulations on the alumni award and honorary degree.
Doyald Young: Thank you! I’m honored and thankful for such honors. I am an amalgam of the people I’ve known whose ideas have permeated my being. I’m blessed—so many people have kindly befriended me. I often wonder, “How do I repay them?”

I believe that teaching and writing books about what I do is a form of payback. Both of which I continue to do, and will, as long as I am able. A priori, how could I not be deeply touched with the awards I’ve received? I’m humbled that Art Center has allowed me to teach these many years, and blessed that I receive support from my fellow teachers and staff.

Dotted Line: What has Art Center meant to you?
Young: Art Center has been one of the great forces of my life. I learned, most importantly, that our first efforts are just that. They need refinement. A good job is done over and over, and oftentimes is changed again and again when marketing forces or creative directors change their minds. Final art does not emerge full-blown. I make my living making changes.

At Art Center, I learned professionalism, punctuality, and above all, how to continue my skills and burnish my talent. And a mentor of mine, Henry Dreyfuss, taught me the value of a thank-you note.

Dotted Line: You’ve said that you are an educator first, and a designer second.
Young: It’s true. When I was a student in Mort Leach’s class, he noticed fellow students coming to me for help on their projects. They came to me voluntarily, and I found that I enjoyed helping them. Mort later asked me to become his teaching assistant.

Teaching requires patience. I firmly believe that if you have the gift of teaching, you must pass it on. As Woodrow Wilson said, “You are here to enrich the world, and you impoverish yourself if you forget the errand.”

Dotted Line. What do you hope to teach the next generation?
Young: Awareness. Education aspires to enlighten. Even though we draw letters in my classes, what I’m really doing is opening my students’ eyes to subtlety and nuance.

Lettering is drawing, and drawing teaches you how to think. It infuses all aspects of design. It’s not some arcane, Zen exercise, but rather a vital ingredient for a complete design education.

Dotted Line: What is the importance of hand artistry in the work that you create?
Young: Despite the common belief that a computer “does things,” a computer only does exactly what it is directed to do. There has to be someone who initially conceives and then creates—either on a Waycom, Mac or by hand—the actual idea.

First, a curve must be analyzed. Its direction, speed, abrupt turn or infinitely subtle arc must be fully realized before a computer can “do it.” The computer hasn’t learned to think or create—yet.

We must learn to look at objects in different ways. Susan Sontag said, “Pay attention. It’s all about paying attention.” I think a great majority of people blindly go through life without observation, which ultimately reveals a lack of curiosity. And without curiosity, success is rarely possible.