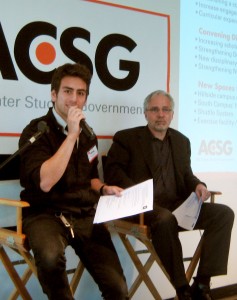 The event provided students an opportunity to hear directly from Art Center President Lorne Buchman and ACSG President Erik Molano on changes they could expect to see in the immediate future, and also offered them a sneak preview of Art Center’s new strategic plan, which will be presented to the College’s board of trustees later this week.

Over the next few days, we’ll provide highlights from the conversation.

On funding scholarships and technology:

“Art Center delivers an education that is very expensive to deliver. It’s high in equipment, high in labor and there’s a lot of team teaching. The cost of educating each of you is actually greater than the tuition that is paid.

“A huge part of my job is to find the philanthropy and scholarships that are going to help with this, not only to cover the gap, but to be sensitive to the enormous financial commitment that you are making as students. I think about this all day. Sometimes I think about it all night.”

“We were able to put $1 million of our operations into scholarships this year. We set a priority for raising scholarships for our 80th anniversary, called the “80 for 80” campaign. We set a goal for $2 million. We have already raised $1.8 million and we still have six months to go. We’re going to our donor community, and they are responsive. So in the last year, we’ve been able to raise and reallocate more than $3 million for our students.”

“Designmatters is becoming an increasingly important part of the future of this institution. Artists and designers can influence the world and make it a better place. Particularly when it comes to attending to troubled corners of the planet, because they can approach issues and problems with a knowledge base unlike any other way of ‘thinking’ and ‘doing.’

“Designmatters is now a concentration that students can focus on, where students can really explore issues of social impact and making a difference in the world with the kind of work that you do. For those students anticipating a graduate degree program, we’re building a Designmatters track starting this summer in the Media Design Program.”

On pop-up studios as study-abroad opportunities:

“A group of students went to Berlin last summer for a pop-up studio. It was elegant and it was inexpensive to set up. Instead of building a whole new campus somewhere in the world, this model allows us to have the flexibility of a pop-up and a great city like Berlin as the basis for our student’s research.

“I visited Berlin and was inspired by what I saw. Our students were learning an enormous amount and Berlin became their laboratory. I see a really strong future in this pop-up studio model, not just in Berlin but in Paris, Milan, Beijing, Seoul and various places in the world.”

One thought on “Students Spend Presidents Day with the Presidents”