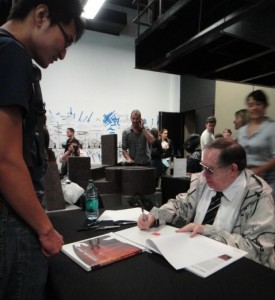 Mead’s lecture traversed the history of the automobile (“My total contribution to Americana automobilia is the taillight of the Ford Falcoln Futura.”), the future of transportation (“Antigravity is the answer for designers who don’t like to draw wheels.”) and his favorite color (“Cherenkov radiation blue, a fascinating optical phenomenon.”).

He also touched on Blade Runner, his early work for Ford and U.S. Steel, his latest book Sentury II and why the future is so difficult to predict.

Here are some highlights from his presentation.

The idea of controlling your creative idea right to the final format? That will never happen. Or rarely. Your ideas will go through a series of committees, compromises and pummels every single time.

On doing things by hand:

I learned how to hand-letter at Art Center, and that was very good training for drawing perfect ellipses. I still use gouache, which is putting paint on cardboard with animal hairs at the end of a stick. I know that’s not very romantic, but it works. All of today’s rendering software and code is made deliberately to mimic the hand-drawn technique.

On the history of the automobile:

The automobile developed out of the industry that made carriages. Today you can buy a Cadillac V-Series Coupe with 556 horsepower to go the store. The history of the automobile is really a transition from something that didn’t go very fast to a streamlined and very sophisticated vehicle. 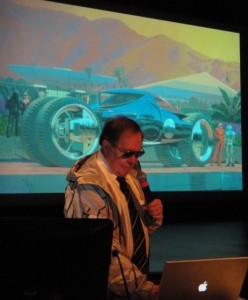 Mead and his "Mega Coach."

I like cars that are horizontal because I’m old. Most cars today look like they’re in a panic stop their entire lives. I think that’s ridiculous. I don’t know why cars are moving towards boxes. Maybe because the average speed of the modern American city is about 25 miles per hour.

On job prospects for graduates:

The whole thing about graduating is that you’re not really guaranteed success. Over 2,000 years ago Socrates wrote, “Luck is opportunity meeting preparation.” And that’s what [you students] are doing.

On getting a raise:

$4,000 a year was the price of a new Cadillac in 1961, and what you got paid when you went to work for GM, Chrysler or Ford as a graduate from Art Center. So I was working at Ford for very little money, and then a company in Chicago [U.S. Steel], got a hold of my artwork and hired me. Over lunch, my pay went from $4,000 a year to $25,000 a year. So I could buy things that I needed, like Corvettes and a 10-bedroom house. 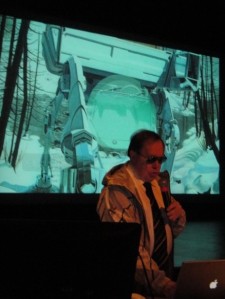 Mead's concept for "a walking truck."

This [illustration] was done around 1964 for one of the U.S. Steel books. Does it look familiar to something from Star Wars? It’s a four-legged walking truck. Originally my idea was that it could serve the DEW Line in Northern Canada. It could walk or, using disc brake technology, you could lock it and swivel the wheels 90 degrees so you could roll and go much faster. It was a walking and rolling machine.

Blade Runner was the second film I worked on from the beginning. It was exciting, but for me it was just another job. I’d been doing corporate and commercial design work and illustration for probably a good 20 years before that. So it wasn’t, “Oh boy, I get to work on a movie!” It was just another job. And I tried to do it as well as possible.

The original script was called Dangerous Days. Aren’t you glad they changed the name? Blade Runner had five openings. In the first one, the movie began with replicants being shoveled onto a long conveyer belt and into a furnace. I was in the meeting where director Ridley Scott said, “We really can’t do that.” 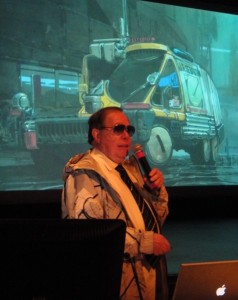 On assembling a visual style:

We called the visual style of Blade Runner retro deco. The other name was trash chique. The character of Sebastian was a tinkerer and he pieced together a vehicle from spare parts that you might find in a junkyard in 2019. So I had to make up what those things were. Like parts of turbines and so forth. His vehicle was junky, but it had a deliberately designed or manufactured look to it.

Somebody asked me, “Mr. Mead, what do you think the future’s like?” Well, the future doesn’t start from zero. The future starts right now. We’re here already and we drag everything along with us. We have the whole history of human design, human experience, human preferences, and social order.

On predicting the future:

New technologies are hard to be predict because of breakthroughs. Breakthroughs are when something happens almost accidentally, which wasn’t a deliberate research goal. And that happens all time. What you’d like to think is that you can do stuff that’s future proof. And that was easier to do 50 years ago, trust me. Now everything is moving so fast. Today, we can print living cells, layer by layer. Eventually, we’ll be able to print lungs, hearts, kidneys, spleens, and livers as artificial organs based on your own DNA. So somewhere in Kansas there will be a big refrigerated warehouse, and when your heart goes bad, you’ll just order a new one. And that’s very, very possible.

Stay tuned to the Dotted Line for an interview with Mead about Sentury II.

One thought on “Syd Mead: “The Future Starts Right Now””