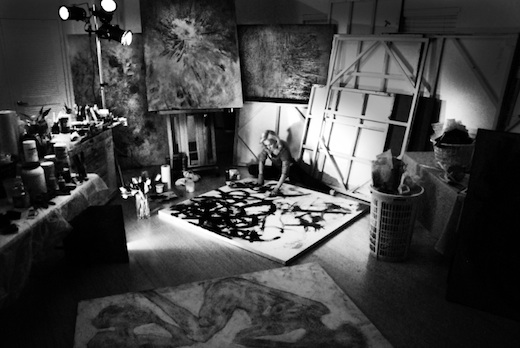 Artist Julienne Johnson in her North Hollywood studio. Photo courtesy of the artist.

“Her work impressed me with its own combination of raw confidence and formal strategy,” said art critic Peter Frank of artist Julienne Johnson. “She knows how to put together a painting, even as she puts herself right in the middle of its fabrication.”

Frank edited Johnson’s first art book Ashes for Beauty, which documents the artist’s collection of the same name, which was the subject of two solo exhibitions at Santa Monica’s TAG Gallery in 2010 and 2011.

Johnson has taken several courses at Art Center at Night over the past few years and she credits the College’s continuing studies program with dramatically changing her work as well as her approach.

“I learned that the making of art is of great value to the world,” said Johnson. “I already knew how immensely important it was to me, but it was through Art Center that I felt empowered to proclaim it boldly.” 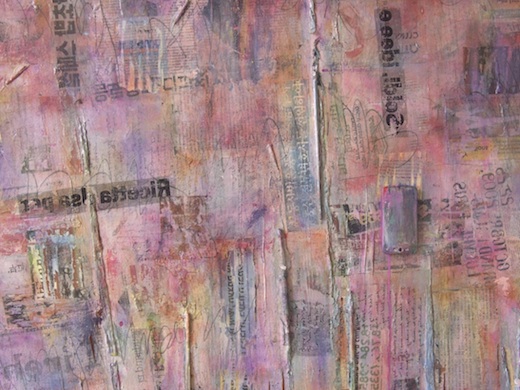 Detail of "Ozymandias" (2012) by Julienne Johnson, oil with mixed media, including pigment transfers and collage on canvas, 60 3/4" x 65". Courtesy of the artist.

“I also learned to have patience with my process,” continued Johnson. “And most importantly, I finally accepted that my work was sacred—a part of me. And if I didn’t believe that, neither would anybody else.”

Johnson credits the late Franklyn Liegel, who taught Collage and Assemblage, a course she took numerous times, for driving home this philosophy within her. “I learned from Franklyn some of the best technique training available for the making of contemporary art,” said Johnson of her mentor. “I will be forever grateful. In fact, Ashes for Beauty, is dedicated to him. As was my third solo exhibition, TOUCHMETOUCHYOU, this past July.”

Johnson credits Mary Yanish with giving her permission to play, without guilt. “It was in her Creative Sketchbooks, Journals and Altered Books course that I first began experimenting with techniques I had learned from [Liegel],” said Johnson. “Mary’s soft touch and non-judgmental approach encouraged my efforts and I wanted more of her attitude to influence my work. So I continued studying with her by enrolling in her figure drawing class—more than once. The experience was delightful and joyous as my skills progressed. Because of Mary, I love drawing the figure.” 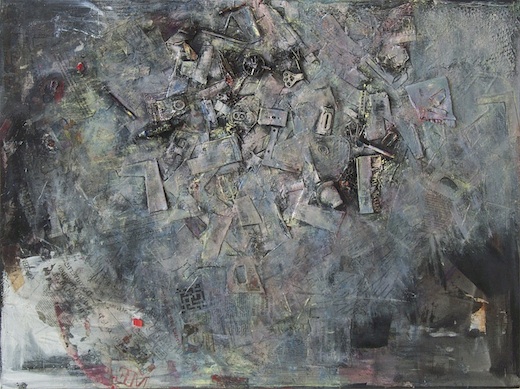 "Obbligato I" (2012) by Julienne Johnson. Oil with mixed media, including pigment transfers and collage on canvas, 30" x 40". Courtesy of the artist.

And she took that new love and pushed it further than she imagined possible in Ronald Llanos’ Figure Drawing course. “Ron insisted on more drawings than I thought I could complete in a lifetime, and he wanted them soon,” said Johnson. “It was after his first class assignment, in which I had to complete more than 80 drawings, that I began to experience a vast improvement and began to develop a stylistic approach. This occurred without my realization. It was largely due to the quantity of drawings I was creating every day. I cannot wait to get back into Ron’s drawing classes when time permits.”

When exactly time will permit is uncertain, as Johnson keeps mounting exhibitions from Santa Monica to Qatar. Her next exhibition is scheduled to open in March 2013 at the LA Artcore Brewery Annex.

“I plan on going back to Art Center at Night, just as soon as these exhibitions let up,” laughed Johnson. “There is so much more that Art Center needs to teach me.  I really want to hone in on my figure drawing skills. I do miss those drawing courses.” 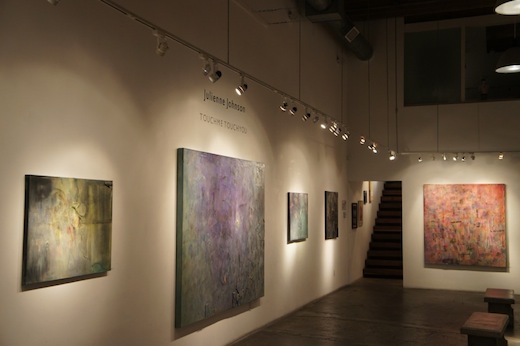