Ten years after its founding, Designmatters is making a difference within and beyond Art Center.

“This University is not maintained…merely to help its graduates have an economic advantage in the life struggle. There is certainly a greater purpose, and I’m sure you recognize it.”

—John F. Kennedy, October 14, 1960, speaking to students at the University of Michigan 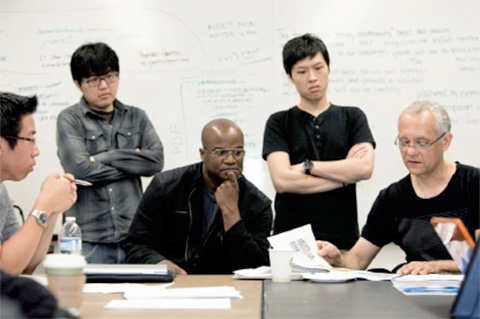 As he campaigned for the White House, John F. Kennedy challenged America’s younger generation to use their talent not just to better themselves, but also to somehow make a difference in the world. Shortly after taking office in 1961, President Kennedy formed the Peace Corps, a transformational government agency that celebrated America’s core values, galvanized our national will and has facilitated service in support of that “greater purpose” for more than half a century.

Forty years later, Art Center students were surveyed on their desire to have some sort of curricular “Peace Corps-type” opportunity. The overwhelmingly positive response set the wheels in motion for what would soon become Designmatters at Art Center, the College’s innovative social-impact initiative. In addition to the Peace Corps model, the brain trust that conceived and developed Designmatters also had other influences. Erica Clark—then Art Center’s senior vice president of International Initiatives—had investigated a number of socially engaged design programs at European institutions. And here at Art Center, “Community Workshop” was already a popular graphic design class that engaged students in projects with local social-impact objectives.

“There had also been a film class that made public service announcements,” says Mariana Amatullo, who along with Clark co-founded Designmatters. “And there was a particularly inspiring product design class that had engaged with the Centers for Disease Control to design water containers that would help stem the spread of cholera in developing countries.”

Amatullo was tasked with conceiving educational programming that embraced social impact design and “connected the College globally.” With the support of then-Art Center President Richard Koshalek, a task force with College-wide representation was convened to explore how to formalize and integrate this new curricular emphasis. “Early on,” notes Amatullo, “the task force proposed that we work locally, nationally and internationally, and defined the mission of the program—which remains the same today: To engage, empower and lead an ongoing exploration of art and design as a positive force in society through research, advocacy and action.”

Four thematic pillars were proposed and evolved as a framework for study and outreach—Sustainable Development, Public Policy, Global Healthcare and Social Entrepreneurship—and in Fall 2002 the first two Designmatters projects (addressing homelessness in Los Angeles and colon cancer prevention) were incorporated into the curriculum. In the decade since, Designmatters has participated with dozens of local, national and international partners in more than 50 projects that seek to effectively improve the human condition, and create better designers in the process.

That decade also saw Designmatters grow from offering two funded projects per term to as many as five per term today. Additionally, many more projects are somewhere in a pipeline that starts long before a class is offered, with incubation and coalition building, and finishes long after, when documentation of the process is published. What was an initiative became a standalone educational department in 2009. And in 2010, with ever more incoming students citing the initiative as, according to Amatullo, “a clear differentiator” in their choice of school, Art Center launched a formal Designmatters concentration.

“Hearing that from students provided strong motivation to serve them with a robust set of educational offerings and to build a curricular trajectory toward careers in these important areas,” says Amatullo, now Art Center’s vice president overseeing Designmatters. “And this year it laid the groundwork for our introduction of Artmatters—a complementary and parallel concentration in the Fine Art Department that will add a new dimension to questions of art and social engagement.”

The Designmatters Department also is overseeing a joint curricular Field track in Media Design Practices, built around a yearlong project conducted in the field. “Students in this track will design in a real-world context where social issues, media infrastructure and communication technology intersect,” says Media Design Practices Chair Anne Burdick. The inaugural project partner is UNICEF’s Innovation Lab in Uganda, where students will do their fieldwork. 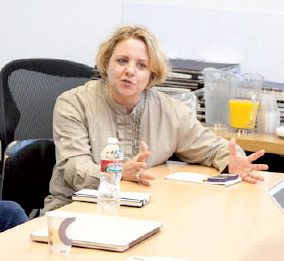 Since its founding, Designmatters projects have produced dozens of award-winning results—from Student Clios and Cannes Young Directors distinctions to Red Dot and Core 77 awards. And in May, based on the Department’s entire body of work, co-founder Amatullo received the inaugural Dell Social Innovation Education award. As an initiative, Designmatters itself has received accolades unparalleled in the academic sphere: In 2003, in recognition of Designmatters’ service to society, Art Center became the first (and remains the only) art and design school granted Nongovernmental Organization (NGO) status by the United Nations. In 2005, Art Center became the first art and design school affiliated as a Civil Member of the Organization of American States (OAS), and also earned NGO status with the United Nations Population Fund (UNFPA).

Designmatters, with its innovative model for participatory design and community engagement that uniquely enhances student skill sets, gives designers tools to generate more resonant and insightful outcomes—in any context. It also provides priceless advocacy and tangible assistance for the subjects of its diverse portfolio of projects. Yet the richest outcome of any Designmatters effort is always the feeling of accomplishment in the students. Maria Moon GMDP 08, a graphic designer whose first involvement with Designmatters came as a fourth-term Graduate Media Design student, voices a common sentiment when asked about her experiences. “The projects that I have participated in have been immensely rewarding on a personal level, and have contributed significantly to my career and outlook on design.”

Now a senior user experience designer for Samsung Design America, Moon lives in New York but has remained involved with Designmatters as an alumna. In her most recent project, she collaborated on “Uncool,” an anti-gun violence campaign created and planned for implementation in the Los Angeles Unified School District within the next year. As for why she maintains ties to Designmatters after graduation and from across the country, Moon is unequivocal: “Once you understand that you can make a difference through your work, the challenge to have a positive impact in the world is too strong to ignore.” 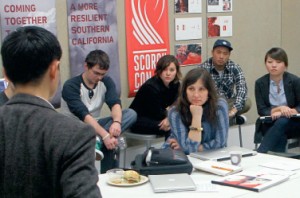 Those are welcome words to Elisa Ruffino, who began working with the Designmatters team early on, first as coordinator and later as project producer. Now she is the Department director, with a unique perspective on this decade of growth, as well as on what the future holds.

“Over the last 10 years, we’ve had a laser-like focus on the student experience,” says Ruffino. “Working within Art Center’s model of transdisciplinary studios, involving the talent of some of our highest-caliber faculty, and building a record of intensive engagement in this space over a decade has been unique and rewarding. But looking ahead, we will be building a bridge to the strong community of recent graduates and alumni who value this type of work, not just as a satisfying educational exercise, but as a professional calling.”

Ruffino plans to work closely with Alumni Relations Director Kristine Bowne to connect with alumni who are working in this space—noting that many have been doing so since before Designmatters existed—in order to extend the reach of the program and foster its goals. But she is confident that even without a formal architecture, because of their involvement at Art Center, Designmatters veterans will continue to pursue responsible, innovative and human-centered strategies that organically expand the web of social impact design.

“For many students,” says Ruffino, “these experiences take art and design practices beyond what they have meant before. It becomes like a light switched on, and many students become so intensely focused that from then on they only want to practice design in this context.”

Perhaps because, as President Kennedy believed, they have recognized design’s—and their own—greater purpose.

Watch Mariana Amatullo’s talk at the Cooper-Hewitt, National Design Museum. Recorded February 21, 2013, her presentation on storytelling and design for social impact begins at the 35-minute mark.