In the March 2013 issue of ARTnews Magazine, arts writer Suzanne Muchnic features the Alyce de Roulet Williamson Gallery on the Art Center Hillside Campus and its nearly two decade-long series of exhibitions. The cover story, “Under the Microscope,” also features other leading contributors to the burgeoning art/science movement, noting that “in museums, schools, and research facilities, scientists and artists are swapping methods.” 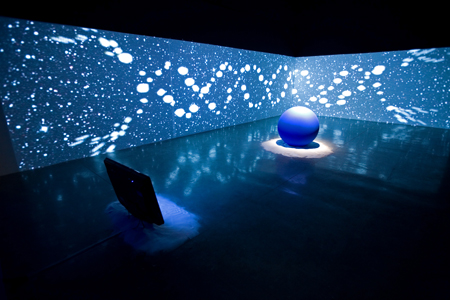 “Strict old-style boundaries like the ones assumed to exist between art and science are eroding,” said Stephen Nowlin, an Art Center alumnus and founding director of the Williamson Gallery, which opened in 1992. “Traditional dichotomies such as intellect versus emotion, reason versus intuition, and the poetic versus the practical, are becoming less distinct under the influence of unprecedented communication networks and analytical tools that reveal in higher resolution and greater clarity the complex layers of things and ideas.”

Jet  Propulsion Laboratory (JPL), Caltech, Carnegie Observatories, The Huntington Library, Norton Simon Museum, Armory Center for the Arts, Pasadena Museum of California Art, Descanso Gardens, The Planetary Society and numerous others have shaped Pasadena and its neighboring communities into a regional hub for exploring and superimposing the arts and sciences.

The gallery has also become a recognized venue for  art/science projects that were organized elsewhere and are now travelling to museums worldwide. Such exhibitions include Telematic Connections: The Virtual Embrace (2000), Situated Realities: Works from the Silicon Elsewhere (2002), Paradise Now: Picturing the Genetic Revolution (2003), Crochet Coral Reef (2011) and The History of Space Photography (2012).

Nowlin, who first collaborated with scientists at Caltech in the early 1970s as an undergraduate student at CalArts, reconnected with Caltech in 2001 to organize the Williamson Gallery’s NEURO (2003) exhibition, a collaboration pairing Southern California artists with Caltech scientists exploring sensory systems in machines and biological organisms.  A string of projects followed, among them OBSERVE (2008), a meditation on deep-space astronomy conducted in partnership with the knowledge resources of NASA’s Spitzer Space Telescope, as well as exhibitions with titles such as EAR(th) (2004),  In the Dermisphere (2007) , TOOLS (2009), ENERGY (2010), WORLDS (2011) and PAGES (2012), that parsed meanings teased from the differences and likenesses of how art and science view the world.

In May 2013, the gallery will present Intimate Science, a national travelling exhibition organized by Carnegie Mellon University in Pittsburgh. Nowlin is currently researching and organizing Realspace, an exhibition opening at the Williamson Gallery in the near future as a partner in AxS: Pasadena Festival of Art and Science, a multi-venue collaboration organized by the Pasadena Arts Council.