The high-intensity, industry-juried, one-day charette provides an opportunity for undergraduate students, in teams of two selected by their instructors, from 12 Southern California design schools to have their design ideas critiqued by leading industry professionals and compete for a total of $23,000 in scholarship prizes. 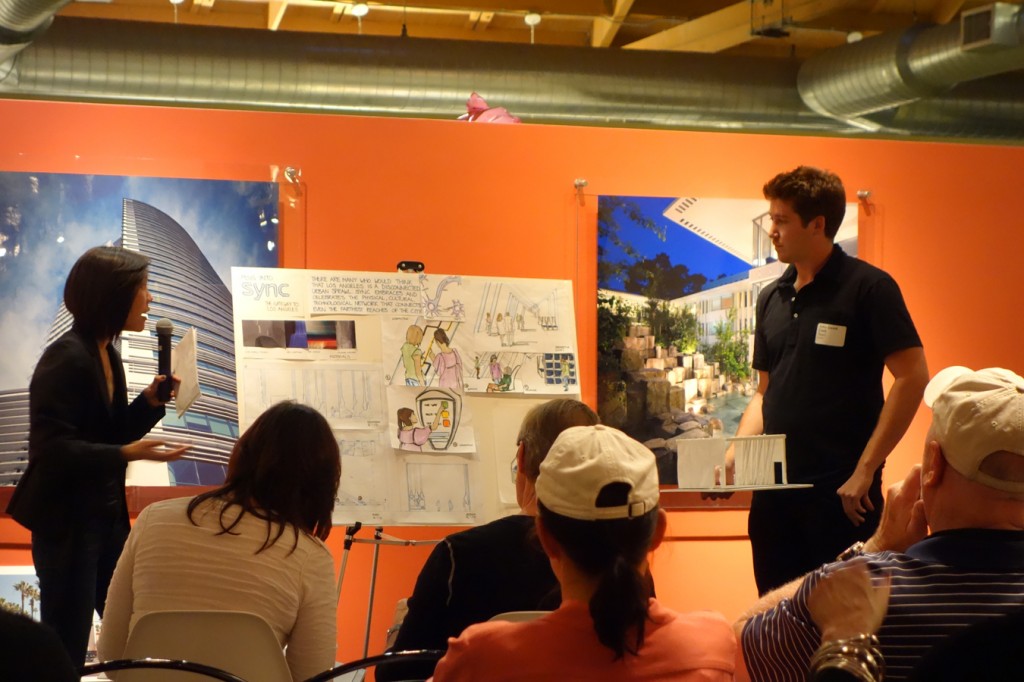 This year students were asked to design the “Linear Gateway.” Their assignment: Imagine a new space for the 600-foot long tunnel that passes underneath the rail lines at historic Union Station in downtown Los Angeles. Transform the existing plain tunnel into a new space that is functional, informative and forward-looking for the city.

“It’s an architect’s competition,” says Clark, in his seventh term at Art Center. He and Connie Bakshi, fourth term, first met during an exhibition design class they took together. They were chosen to represent Art Center at LAIAC after winning Environmental Design’s department-sponsored “pre-challenge challenge” involving seven other teams of their fellow students. Clark and Bakshi learned a lot from the intensity of that competition. They further prepared by spending several weekends studying the LAIAC competition’s previous briefs together, to get a sense of what the judges were looking for.

“It was clear they were looking for speed,” says Clark, “and also quality hand-sketching since no computers are allowed.” He credits Department Chair David Mocarski and faculty members Robert Hunt and Robert Hall for taking time to work with them ahead of the competition, including on days off, to discuss strategy and practice pitching. “They’re not just masters at what they do,” he says of his teachers, “they are generous mentors and they know how to grab judges’ attention.”

This year’s charette took place in Culver City, Calif. on Sat., March 23 at HOK, founded in 1955 and today a global provider of planning, design and delivery solutions for the built environment. After receiving the program brief in the morning, student teams worked with prominent design professionals who served as volunteer mentors throughout the day. Each team had just seven hours to produce a presentation board as well as a model to help convey their concept. Six teams selected as semifinalists verbally presented their projects to the jury, as well as an audience of guests, and hours later the winners were finally announced.

Clark and Bakshi took it all in stride, and remain focused on the work ahead.

“Over the next two terms I want to pick a direction, create a niche for myself,” says Clark, grateful for the many opportunities his Art Center education has provided, including spending last summer in Berlin at a German design school.  “If I could stay at Art Center forever I would.”

LAIAC is part of the American Institute of Architects (AIA) Los Angeles Chapter. The Committee increases awareness of significant interior architecture; encourages and provides support for professional involvement with architecture and interiors, and for design students and their educational institutions; and reaches out to the architecture and design community as well as to the general public.