Ever wish you could “unstuck” yourself from a sticky situation? Creative Director Audrey Liu of SYPartners Inc. developed an iPad app called Unstuck that helps users find motivation to overcome obstacles by understanding what’s wrong and providing a set of tools to solve the problem.

In a recent profile in The People Stories, Liu admits that she had admired SYPartners while she was studying at Art Center, where she presented her exhibit to them on recruitment day. Liu came prepared to seize the moment, at least partially thanks to the training she received while studying abroad at INSEAD, a business school in Singapore and a longtime partner of Art Center. 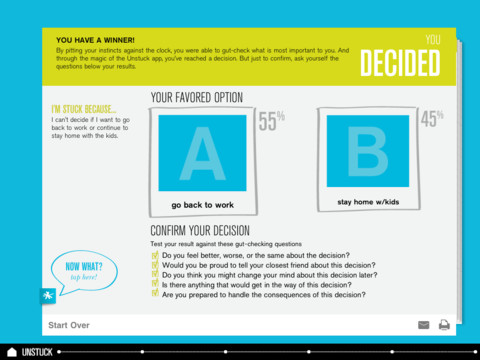 That experience, Liu said, also reinforced “the importance of design and storytelling as a communication tool.” Now, split across bi-coastal offices in New York and San Francisco, she and the rest of the SYPartners product design team brainstorm and develop products that transform the way companies do business. “Now being involved in the hiring process at SYPartners, I can see a focus on clear, simple, emotive storytelling as well as a passion for communicating information in a very human way,” said Liu.

During the past two decades, the firm has guided some of the world’s most respected companies like Starbucks, Apple, Facebook, Coca-Cola, Visa, and more. Liu feels inspired and excited by the challenges she and her team face on a daily basis. “I feel very lucky to be able to say that there are a lot of things that I love about my job.”