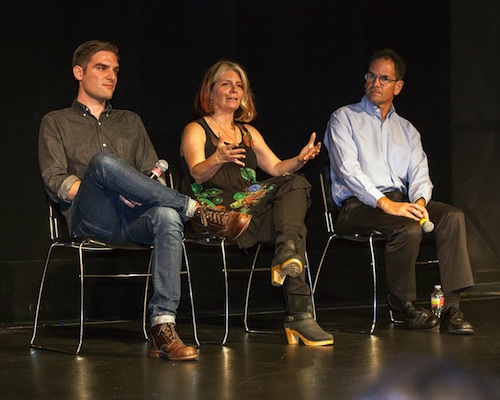 Ask a group of web designers to describe the state of internet aesthetics and you’re likely to get as many answers as there are designers. There are few working environments more fluid than the digital domain, a kind of primordial soup where new innovations and ideas constantly bubble up, creating a rapidly evolving field where the rules of engagement are constantly shifting.

However, the most recent installment of Art Center’s 3X3 lecture series, Web Design: Past, Present and Future (held on the evening of June 26 at the College’s Hillside campus) made some major strides toward delivering a clear picture of how to best navigate and succeed in this nebulous arena.  The event featured a trio of design luminaries — Art Center faculty member John Chambers, Facebook Director of Product Design, Maria Giudice and MySpace Creative Director (and Art Center alum) Marshall Rake – each of whom brought an array of  diverse professional experiences to bear on a specific phase of the state of the art of web design.

Chambers kicked off the proceedings by offering a longitudinal perspective of digital design, from its primitive beginnings (back in the 1980’s) through its rough infancy (when nobody believed it would survive) to the restless adolescent it has become today. The popular web design instructor harkened back to a time when designers had very few tools with which to ply their trade beyond simple HTML code, which, he pointed out, remains the through-line connecting the web’s earliest iterations and the complex motion-graphics enabled sites of today.

Maria Giudice then took the stage, donning a headset and unleashing a dynamic presentation that could have easily been mistaken for a TED Talk on the rise of web design in tech circles. (That’s no coincidence given that she’s no stranger to the TED stage).  Guidice described her career trajectory, which began in print, where she redesigned the PacBell yellow pages before migrating to the web and launching her own design firm, Hot Studio, which she recently sold to Facebook, where she now works as the social network’s design guru.

Giudice strongly emphasized the notion that we’re in the midst of a tectonic shift, from an entrepreneurial culture centered on engineering expertise to one driven by design innovation. “When Facebook acquired us, it was a declaration that designers have value too,” said Giudice. “Engineers used to have all the currency. But companies are making an investment in design. I think we’re going to see the rise of the DEO – leadership by design. They’re going to be the future leaders of companies. You have to think and act like a designer to unlock innovation.”

Graphic Design alum Marshall Rake followed Giudice and echoed some of her thoughts about how designers must respond to the explosion of content generation by taking a curatorial approach to their web presence (think: Pinterest). He also emphasized the idea that the future of web design has yet to be invented and encouraged aspiring designers to experiment and expand upon what’s already been created.

“On the web your creations are always on the brink of being discovered,” said Rake. “Three things to think about with every web design challenge are how to simplify, organize and contextualize information.” Following his brief, high-decibel video montage of some of the recent work he’s done for MySpace, Rake ended the evening with an imperative to future designers: “We have a crazy opportunity in front of us,” he insisted, as a mischievous smile spread across his face. “The web is a place we can experiment because so much stuff doesn’t exist yet. It’s our job to go out there and detonate.”