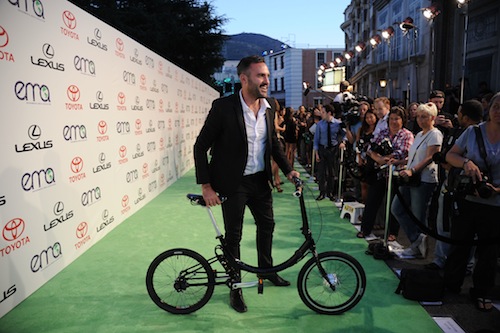 Gabriel Wartofsky with his electric bike at the Environmental Media Awards.

When entrepreneurial inspiration strikes, it’s often described as the convergence of creative and commercial instincts. An innovator perceives a void in the marketplace and conceives a product or experience to fill that space and drive demand for more. But for Gabriel Wartofsky and Bob Vander Woude, that well-worn path into the startup trenches has been less clear-cut.

The partners have spent the past two years developing Conscious Commuter, a company built around an electric bicycle with a sleek design and long-range battery. However the whole enterprise is driven by nothing short of a mission to revolutionize transportation.“We’re solution providers,” declares Vander Woude, an entrepreneur and CEO of a seed-stage investment fund, who was looking to fund an electric bike company when he happened upon a web demo of Wartofsky’s senior thesis project, now the basis for their partnership, which aims to implement e-bike sharing systems in cities around the world. “We’re multi-modal. That’s the secret sauce. Other electric bike companies are not coming from the background of solving a social problem. They’re just motivated to get to a retailer and make money.”

For Wartofsky the project was propelled as much by his family history and the relationship between metaphysics and biking as it was by his interest in devising sustainable transportation alternatives. “I came from biking hippies as a kid. We never had a car so I always fetishized them and I wanted to be a car designer,” says Wartofsky, who graduated with a degree in Transportation Design from Art Center in 2008.  “My mother was known as the ‘Bike Lady’ in Washington, D.C., and her main philosophy was that if you’re not confined in a car you can see daily magic.”

This ideology deeply embedded itself within Wartofsky, even as he prepared for a career designing four-wheeled vehicles. While at Art Center, his idea for a motorized bike revolution really took hold during an internship with Santa Monica’s Big Blue Bus, where he worked on a campaign to attract more commuters to public buses. That eventually sparked his inspiration to create a portable bike that would fill the gaps left by public transportation without the risk of arriving at work fresh from a workout. “I looked at it from a systems approach,” recalls Wartofsky.  “I thought, ‘An electric bike is good because it takes away the greasy, sweaty aspect and a quarter mile you can bike easily. If it folds you can plug it into other modes of transit.’ It was a thesis project and we developed a racking system that took up the bike racks kind of like a trash trucks and distributes the bike throughout the city.”

Recently Conscious Commuter joined the first cohort of companies to incubate within The Design Accelerator, a for-profit joint venture between Art Center and CalTech intended to offer students resources and training in making their entrepreneurial dreams come true, while funneling a percentage of any profits back into the College’s scholarship fund. Conscious Commuter is one of three teams in various stages of product development within the newly minted incubator housed within Pasadena’s IdeaLab. “People do venture capitol because they want to do disruptive things,” says Erik Hovanec, who acts as co-founder of The Design Accelerator along with Art Center Special Assistant to the President, Mark Breitenberg. “Tech is plateauing and how you interact and use tech has become more important. Without cutting-edge design you can’t be competitive. Our goal is to put these companies on a pedestal and give them the tools they need to succeed.”

With the benefit of two years’ worth of research and development and a growing portfolio of investors and media attention, Conscious Commuter is the most established member of TDA’s inaugural class. Wartofsky and Van Der Woude saw The Design Accelerator as an opportunity to mine a rich vein of resources while giving back to the institution that gave the project its start. “We’ve been courted by a lot of incubators,” says Vander Woude. “But we wanted to give back to Art Center because they’ve been so gracious and helpful. We’re working with [Advertising chair] Gary Goldsmith on branding. I’ve been on startups for 30 years and have never been through a branding exercise like this that gets to the core of what makes you different and how to compete. I’m a grey hair. But I’ve been learning.”

“Art Center has been really good to us every step of the way, from the first prototype using the guys in the shop and now with The Design Accelerator,” agrees Wartofsky. “The momentum really began when the College then put our prototype in 15 of its events.”

With large orders ramping up from several high-profile companies (check this space for an announcement soon), Conscious Commuter is making serious tracks toward its ultimate destination: the implementation of an electric bike component to most major metropolitan transportation plans. “There’s a heart and soul to this company that’s not just another electric bike company,” says Vander Woude. “There’s a bigger piece of the pie here. It’s a movement and we’re just doing it incrementally.”

In the meantime, Wartofsky has already found deep satisfaction in his e-bike’s potential to share his family tradition. “There’s magic everyday you just have to look for it,” adds Wartofsky. “It’s just hard to do in car in a traffic jam.” Problem solved.