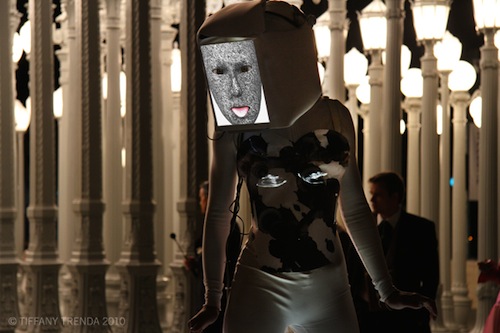 New media performance artist and Art Center alum, Tiffany Trenda (Fine Art, ’02) will unveil her video installation, Le Grande Odalisque, at SALON HYSTERIQUE in London next Tuesday, from 6 to 10 p.m. For those of us stranded on this side of the pond, here’s an advance glimpse at the spirit animating Trenda’s work, the soiree and the larger show of like-minded creative provocateurs, which runs through April 19, 2014.

Expect an evening of hysteric feminisms exploring the connection between body and language by ways of corporeal and textual manifestations, aiming to restore the woman’s voice to the record and to produce outrage, cause and effect outside of the established norms. The event will also celebrate the launch of the first issue of a feminist magazine, a group art exhibition and a two-women/two-wounds spectacle.

Gabriella Davis describes the group show, modestly titled LA PETIT MORT ET LA GRANDE HYSTERIE as follows: A hysterical dramatization of the conflicts between desire and defense, license and prohibition, voyeurism and exhibition, castration and self-conservation, latent and manifest, sadism and masochistic pleasure, memory and resistance, destructive fantasy and cathartic fantasy,”* religion and ecstatic pleasure, manipulation and emancipation, concealment and revelation. These conflicts result in convulsive contortions and corporeal manifestations, in an antagonistic sensational conflict between the spectator and the spectacle, the author and the reader, the silent producer and the loud recorder. A radical recasting of the hysterical objectification of the unvoiced women now breaks through the societal stereotypical constraints within a neoliberal context as, third-wave feminists and philogynists alike, speak with the mouth of that wound, bringing these conflicts to an end. Does the wondering womb have its own mind after all?
* Lea Virgine, Il corpo come linguaggio, Milan, 1974.

And just to raise the intrigue ante up a few notches, (and strike envy in the hearts of those unable to attend), games will be played. Here’s Davis again with a baroque description: A parlour with the cut-up technique – an exquisite corpse between the White Swan/Odette/Juliette and the Black Swan/Odile/Justine. Under the veil, the corpus is stimulated by ways of poetic imagination and body memory recollection, through the operation from concealment to revelation to concealment till they reach, The end. Do you think it is easy to get rid of a wound, to shut the mouth of a wound?

And if that’s not enough excitement for one night, the feminist magazine, HYSTERIA | L E  M A G A Z I N E, will debut its first issue: ‘Backlash.’ A little backstory and context courtesy of contributor, Bjork Grue Lidin: In the summer of 2013, a group of SOAS students got together and formed the SOAS Feminist Society. Frustrated about how feminism is one of the few ‘isms’ invisible on campus, and how a single mainstream, capitalist feminism dominates the media and the everyday feminist discourse, SOAS Feminist Society immediately aimed to create a radical and challenging feminist platform. Out of this vibrant environment evolved HYSTERIA. This publication is committed to shed light on feminist struggles around the world through critical voices. Since journalistic articles are not always the most appropriate medium to express feminist agony, anger, dreams and beliefs, HYSTERIA involves diverse modes of expression. The conviction that contradictions and disagreements are imperative when transforming the misogynistic monster in all of us is the common thread of the publication. For this reason, what all contributions have in common are their refusal to reproduce, agree and consent.