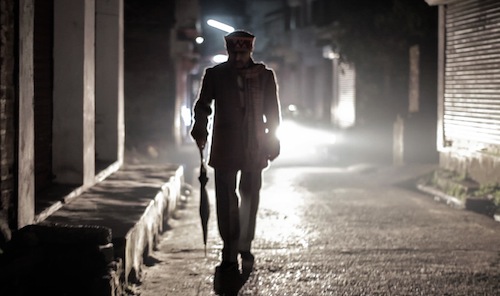 Each year, the Academy of Motion Picture Arts and Sciences (aka the organization that hands out the Oscars) receives over 500 submissions from student filmmakers around the world. This past week, Art Center Graduate Film student, Rahat Mahajan’s narrative short, Istifa (Resignation), was selected as a national finalist for the most prestigious prize awarded to student filmmakers.

Please join us in congratulating Rahat, a 5th term student from India. Shortly after hearing the good news, we caught up with Rahat and asked him to share his thoughts on the process of making the film and where he hopes to go from here.

The Dotted Line: Tell us a bit about your background and your creative influences.

Rahat Mahajan: In the field of dreams that we call life, its been a beautiful and eventful journey to this point. In 2011, it had been almost seven years since I had started working in Bollywood. I was making lots of money working on really big projects. But I was extremely bored and unfulfilled. It was then that I had an epiphany of sorts with a near death experience, which I consider my greatest gift from the universe: It made me realize the impermanence of everything that lives – including myself, being just a wave which would rise and merge back again with this glorious ocean.

From that moment on I decided to nurture myself more deeply as an artist and live life to the fullest. This was the turning point where I decided to pack my bags and come across to this side of the world, to attend Art Center and fulfill the dream of opening up my mind to greater possibilities as a filmmaker. The inspiration for this choice was found in a book I had read, written by professor J.P. Geuens called Film Production Theory. And instantly I knew that any learning I had to do would best be done in the presence of the great living guru that wrote that book.

Since coming to Art Center I’ve benefited from the brilliance of J.P. along with guidance from the following phenomenal professors:

TDL: What’s the film about?

RM: Set in a remote indian village of Himachal Pradesh, Istifa tells the story of a day in the life of a meek and submissive clerk named Fatehchand Sharma as he is routinely and relentlessly humiliated by his boss.

TDL: What inspired you to tell this story?

The making of Istifa (Resignation) has been one of the most incredible and memorable experiences of my life. I had to urgently fly back to India in Nov ’13  due to the sad demise of my grandmother. And it was during the train ride to the Ganges, where I was traveling to with my family in order to disperse her ashes, that I read a short story written by Munshi Premchand. It struck a deep cord in my heart; and that’s the precise moment I decided to make it into a film that I would dedicate to my grandmother. I then reached out to an organization called Visual Communications in Los Angeles, which had already awarded me a grant for another film, and they graciously allowed me to proceed with the new idea.

It was an immensely difficult yet eventful journey of fighting against all odds to make this film come to life; and it put my training from Art Center to test every moment of the way. Since it was shot in a very remote town/village in India, which lacked access to even the most basic filmmaking equipment or experienced crew members, I was forced to improvise and invent in order to realize my goal of making this film. Here are a few examples of the challenges I faced:

Time: This important asset was in short supply, as I had a deadline to be back in the US in 2 weeks and enroll in the spring term of school in order to retain my I-20 and F1 Student visa status.

Equipment: The only equipment in my possession was a DSLR camera with 2 lenses and a portable sound recorder, which I personally own. So, together with the help of two household electricians, we built our own lights, a camera stabilizer made of bathroom fittings and all the other basic necessities required for the shoot from materials available in the local market.

Actors: Due to our remote area and lack of time, we were really limited in terms of our options for hiring professional actors. Here is where the films of Robert Bresson acted as the guiding light and nourished my belief and confidence in using a non-actor for the role of the film’s protagonist.

Crew: Since we were on a minimal budget and really far away from the metropolitan cities (Mumbai, Delhi, Chennai) and working against a two-week deadline for returning back to the US, the possibility of hiring a professional crew was out of question. In order to fill that void, I ended up training the staff from my parents’ small hotel (which they own) to be my crew. It was the childlike curiosity, initiative and enthusiasm of the crew and my parents, who acted as producers (with my mother filling in as production designer as well) that helped my dream come alive.

TDL: How did you feel when you learned you were a finalist in the Student Academy Awards?

RM: I was shocked. Surprised. Happy. Extremely grateful. I was gratified to see Art Center College of Design among the other nominations from prestigious film schools across the country. That made me happy. So the very next thing I did was inform my super awesome Department Chair, Ross LaManna, about our selection and shared the good news with my mentors from VC, Ann Kaneko and Milton Liu who had been a part of the film’s journey from the very first day.

And most importantly, I was grateful to my late grandmother, as it’s a gift for her and I hope this makes her happy wherever she is.