This spring term I had the privilege of directing a short film as part of a Designmatters studio hosted by the Graphic Design Department, which was structured in partnership with Homeboy Industries, the country’s most successful gang intervention program.

Addressing Homeboy’s real and ongoing need for fundraising, we put together a video called Stand With Us. It brings together the insights of longtime donors to the organization with the stories of two former gang members, whose lives were transformed for the better at Homeboy.

Homeboy decided to screen Stand With Us on May 3 as an opener for the Lo Maximo Awards, the organization’s annual fundraiser. It was a fabulous night with food and drink, glamorous people (some of whom were tattooed) and lots of hugs, laughs and even some tears. It was a special moment for me as I got to see an eclectic and undoubtedly grateful crowd cherish my work—and the fruits of a successful collaboration between my school and one of LA’s finest institutions. 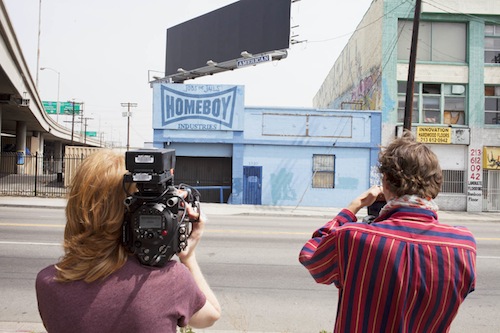 Benjamin Weiss (right) directed the Designmatters film
Stand With Us for Homeboy Industries.

The evening’s keynote speaker was Father Greg Boyle a.k.a. G-Dog, the famous bearded Jesuit priest, bestselling author and community organizer. With unremitting work and the sincere joviality of a 21st Century sage, Father Greg has impacted thousands of lives throughout Southern California during the past 25 years as the executive director and founder of Homeboy Industries.

At the core of the Homeboy message stand the ideals of mutuality and kinship. They translate into the simple, yet profound realization that there is no separation between a former gang member and a donor, or—as in our case of making the film—there is no separation between gang-impacted youth and a design student. No matter where we come from or where we’re headed, we’re one community of equal human beings each doing our part in tending the garden that is Los Angeles.

It’s kind of a spiritual thing that the homies have going on. And it seems to work. At Homeboy you’ll find trainees and staff, donors and volunteers all mutually giving and receiving the healing. It creates a space where Homeboys and Homegirls can safely dispose of that emotional garbage bag that so many have accumulated through years of abuse, while donors and volunteers stand in awe towards the raw humility with which they carry it. It’s transformed lives transforming other lives, as G-Dog likes to say. And it’s obviously a dream come true for a filmmaker like myself.

Thank you for watching. 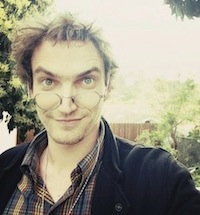 Benjamin Weiss is a 9th term Film student at Art Center College of Design, preparing to graduate this summer with the Designmatters Concentration in Art and Design for Social Impact as part of his undergraduate degree.  In his final term at Art Center, he is serving an appointment at the Aquarium of the Pacific in Long Beach as a Designmatters Fellow. Benjamin’s portfolio can be found here.

One thought on “‘Stand With Us’: Students find kinship with Homeboy’s gang intervention program”