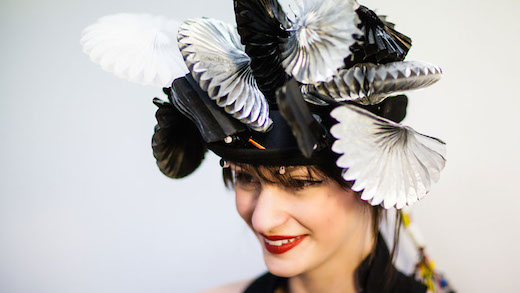 With Apple and Google both adding fashion professionals to its regiments, it appears that the next consumer electronics war will be waged not over the smartphone in your pocket, but over the devices worn around your wrists and over your eyes.

Always ahead of the curve, Art Center students, instructors and alumni are currently imagining where wearables might head next. And while wearables will undoubtedly translate to big business, how might this technology change our behavior as human beings?

Last week, a group of local, national and international journalists, in town to cover the Intel International Science and Engineering Fair, took a field trip to Art Center to see demonstrations of the prototypes created in Wearable Ecologies.

“The point is to explore what the potential of wearables is, not for tomorrow but say five to 10 years from now,” Van Allen told John Rabe of KPCC’s Off-Ramp, when explaining the course. “Where can we go, where can we develop the technology, design and interaction to make things that are truly interesting for people?” 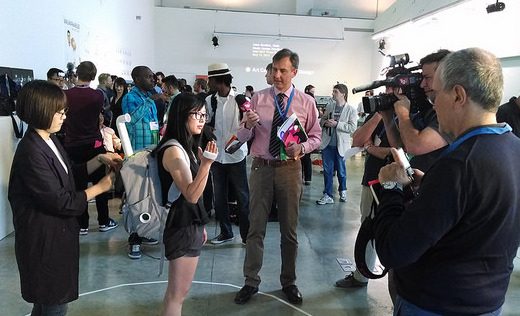 In the course—which ran concurrently with the Connected Bodies: Imagining New Wearables public symposium co-produced by MDP and Intel—students designed and built prototypes that explored the potentials and challenges of future wearable systems. 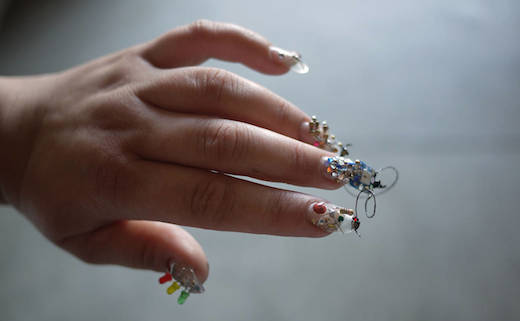 Inspired by haute couture, which is not designed for daily wear but to make a definitive statement, this project imagines a scenario in which clothing expresses the wearer’s attitude directly without the concern of adhering to social conventions.

Fast Company described Expressive Wearables as a “piece of fashion-forward wearable tech” that “looks like a Steampunk take on Kentucky Derby fashion, and functions like a celebrity bodyguard.”

Ji Won Jun’s Data Vaporizer imagines how people and their technologies might react to a future world where data sharing is pervasive, constant and perhaps out of control due to wearables.

The Data Vaporizer protects its owner by proactively and visibly vaporizing anyone else’s data before they can get to the owner’s data. In this way, it creates a protective space where data thieves would be afraid to steal data for fear that their own data would be destroyed. 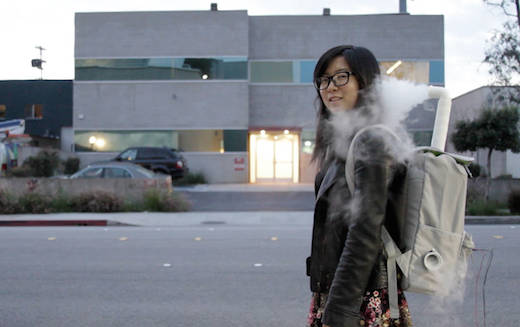 Expanded Discourse by Zoe Padgett and Gerardo Guerrero investigates how wearables might play a role in the fleeting interactions between people.

The expanding shirt inflates to signify when someone has a desire to speak, and visualizes the process of expelling one’s thoughts by deflating as they speak. Or, as KPCC’s John Rabe described it: “A puffy suit that mirrors the wearer’s pensiveness or pomposity.”

Marcus Guttenplan’s and Tim Kim’s MALWAReABLES imagines data theft scenarios in a world in which devices work together and talk amongst themselves.

Situated in and around a subway station, the vignettes of MALWAReABLES feature a pickpocket who updates classic cons with the new gestures that people must use to interact with their wearable technology, ripping off unsuspecting data-rich. 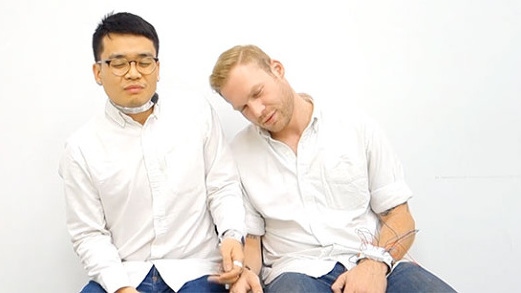 “This is why we want to work with design schools,” said John Somoza, manager of Intel’s Higher Education Program, referring to Art Center’s inclusion in the company’s inaugural Design School Network and pointing to the wearables being demonstrated in the Wind Tunnel at South Campus. ”This is such out-of-the-box thinking. When you combine great design with great thinking and great technology, amazing things come out of it.”