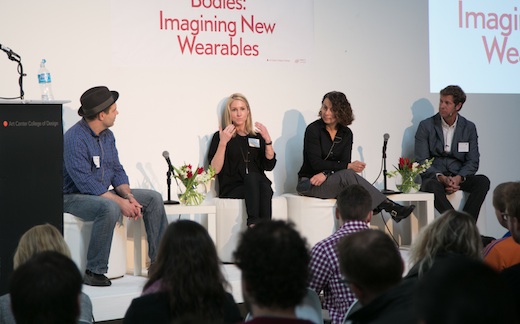 At last month’s Mobile World Congress in Barcelona, Samsung showed off its upcoming Gear Fit, a wrist-worn device that performs double duty as an activity tracker/personal trainer and as an extension of your smartphone. It’s just the latest salvo in the escalating war of the wearables, a battlefield already crowded with devices from companies like Jawbone, Fitbit, Nike and Pebble, and about to get even hairier with Google and Apple preparing to enter the fray.

While companies were showing off their wearables in Spain, here in Pasadena, Art Center’s graduate Media Design Practices (MDP) and pioneering technology company Intel were exploring the future of the field itself in a public symposium titled Connected Bodies: Imagining New Wearables.

Art Center is one of five international institutions asked to join Intel’s inaugural Design School Network—a group that also includes California College of the Arts in San Francisco, Carnegie Mellon University in Pittsburgh, the Copenhagen Institute of Interaction Design and the Royal College of Art in London.

Intel’s goal in partnering with Art Center—along with all of the schools in its design school network—is to enhance students’ learning environment by promoting creative thinking in areas where technology and user experiences collide. What the partnership creates is a truly symbiotic relationship—students benefit by gaining access to Intel’s latest technological innovations; Intel benefits by gaining access to the creative and unconventional thinking of the students.

To date, Art Center has received $130,000 in gifts from the Silicon Valley company to investigate the relationship between design and technology. A portion of the funds supports the MDP’s Technologist-in-Residence and current investigations into the future of wearables.

The partnership is also part of Intel’s larger “Make it Wearable” global initiative to inspire ideas and fuel innovation that will evolve personal computing in new ways.

“The symposium brought together really disparate worlds,” said Wendy March, design lead for mobile experiences in the Interaction and Experience Research Lab at Intel, who also conceived of a four-week Connected Bodies­-related course with MDP Professor Phil van Allen and Associate Professor Ben Hooker. “It brought together people from different disciplines whose connections were not obvious, even to themselves.”

The daylong event was co-produced by MDP and Intel and was organized by alumna and Technologist-in-Residence Syuzi Pakhchyan (MFA 05 Media Design Practices), who runs the couture and circuits mashup blog Fashioning Technology and acts as a consultant for consumer electronics companies. The symposium brought together luminaries from industry, academia and beyond to explore issues surrounding the complex nature of autonomous digital transactions, the ability of wearables to adapt to different contexts, and how this new wave of interactions should behave both aesthetically and culturally.

One topic this first panel discussed is that companies are making wearable devices without thinking through the entire user experience, which covers everything from the materiality of the product to the user interface. “Instead of borrowing metaphors from current mobile devices—swiping for example—you could interact with the wearable using gestures,” says Pakhchyan. “There are so many possibilities. The user experience goes way beyond the user interface.” 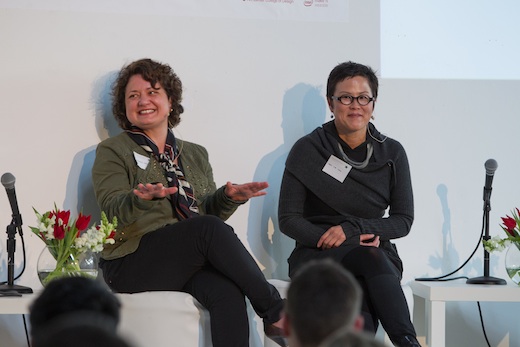 The afternoon panel, “Connected Bodies: A Look Into the Future of Socio-Cultural, Expressive, and Aesthetic Possibilities of Wearables” brought together: Joanna Berzowska, associate professor and chair of the Design and Computation Arts Department at Concordia University, and the founder of XS Labs, a design research studio focused on the fields of electronic textiles and reactive garments; and Doris Kim Sung of DOSU Studio Architecture, who is currently working on developing smart thermal biometals and other shape-memory alloys.

“The conversation between Doris Kim Sung and Joanna Berzowska brought up some unusual insights,” said Pakhchyan. “There were so many links between how the two of them work—their styles, their ideas, the way they approach materiality—even though one is designing buildings and the other is making clothes, or perhaps we should say ‘architecture for the body.’”

The symposium also featured a “Make It Wearable” series of demonstrations with: Meg Grant, a designer, technologist and maker who worked on the award-winning Solar Fiber photovoltaic yarn and is researching smart textiles; Julia Koerner, a lecturer at UCLA’s SUPRASTUDIO who has worked on collaborative projects for Additively Manufactured fashion pieces for haute couture fashion designer Iris van Herpen and 3D printing company Materialise; and Jay Melican, Intel’s Maker Czar who coordinates Intel’s outreach to the maker community and makes the company’s technology accessible to creatively inclined students. 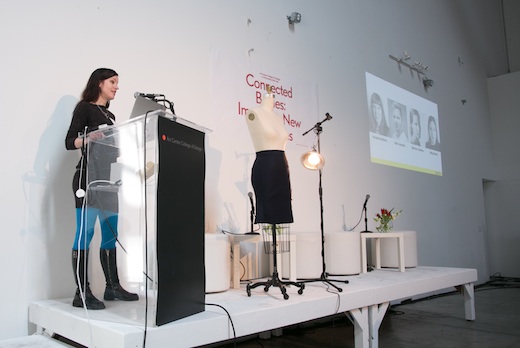 The symposium ended with the presenters and attendees breaking into five “New Questions/Challenges” breakout sessions, in which they were tasked to brainstorm the future of wearables and identify big questions that society should consider regarding wearables. Questions raised included: “What are new approaches to interactions that may use gestures, sound and haptics?”; “How can the design of wearables deal with the learning curve that bold new interactions require? Is it a balance between machine learning and human learning?”; and “What is ‘smartness’ in wearables? How will it work, what will it do?”

“The conversations about challenges in the wearables sphere generated some fascinating questions,” said March. “The group I was part of asked, What are the red herrings? In other words, what do we all think wearables are about but maybe they’re not really about at all? Right now, the industry is obsessed with fitness, but maybe in two years we’ll be saying, What were we thinking? That was so not the point.”

These questions, and others raised at the symposium and its related projects will be revisited throughout the year by MDP faculty and students. Follow the department at its website or on Twitter at for the latest news and updates.