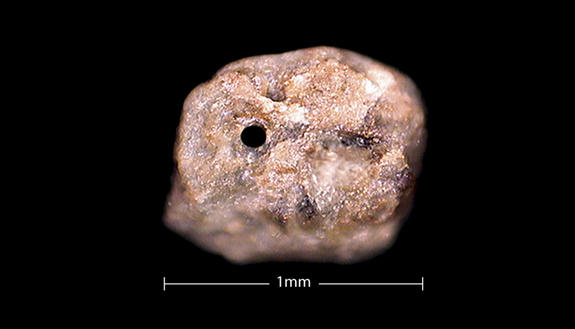 When Dan Goods was studying graphic design, he figured he’d probably end up at an ad agency or some sort of commercial corporation. But these days, he tackles bigger artistic concerns than choosing an appropriate typeface, layout and color. Much bigger. Like Jupiter-sized big.

For the past 10 years, Goods has worked as a visual strategist at NASA’s Jet Propulsion Laboratory (JPL) in Pasadena, Calif. He works to translate the technical, data-driven language of JPL’s missions into engaging, public-friendly works of art. When negotiating his position, the original idea was that Goods would create visualizations communicating JPL’s work. But the artist pushed back: He didn’t want people simply to see the universe; he wanted them to feel it.

“What is great about being here is that I get to work with content that is, in its essence, mind blowing. But you still have to express it in a way that’s mind blowing as well,” said Goods, who was named “one of the most interesting people in Los Angeles” by “LA Weekly”in 2012. “I want to be able to give people a moment of awe about the universe that we live in.”

Take his piece “Beneath the Surface,” inspired by the Juno spacecraft’s mission to Jupiter. Launched in 2011, Juno will penetrate Jupiter’s thick cloud cover for the first time in June 2016, allowing scientists to study the planet’s evolution and properties, including the depth of its powerful lightning storms.

Intrigued by the idea of those massive storms, Goods used vaporized tap water, ultrasonic misters, infrared lights and audio recordings of thunder to simulate what the environment might be like when Juno descends upon the gas giant. The artist filled a darkened room with a vast, amorphous cloud, backlit by an eerie, reddish glow. In a nod to the instruments needed to see below Jupiter’s clouds, Goods created the installation’s “lightning” using infrared lights, which are invisible to the naked eye but can be seen with a cellphone camera. As thunder crashed all around, visitors could use their phones to embark on their own exploratory missions of the lightning storm. 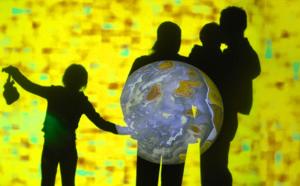 “That experience of going into this room, seeing this crazy cloud, touching it, using their cellphone — it’s all an experience I like to hope people take with them for a long time,” Goods said.

Although Goods said he has always been fascinated by space, he didn’t consider pursuing science professionally until he arrived at the Art Center College of Design, also in Pasadena. When the nearby California Institute of Technology opened its summer research program to Art Center students for the first time, Goods became one of the first three artists accepted. He found himself working alongside conceptual artist David Kremers to help create the “Mouse Atlas,” a digital tool that visually mapped the development of mice. While a far cry from astrophysics, it left a profound impression on Goods.

“The experience of hanging out with scientists was fascinating for me,” he said. “I loved the big ideas that science works with, and I felt like I was doing something meaningful.”

Goods had such a positive experience that after graduation, he focused his job search within the world of science. After a number of false starts, he was invited on a tour of JPL with the president of Art Center and the director of the NASA facility. “I had about two seconds to sell myself,” Goods remembered. Eventually, he succeeded in showing JPL’s top brass the Mouse Atlas and a traveling pipe organ he had invented by rigging soda bottles to a car. The projects were innovative enough to convince JPL staff that Goods had more to offer than the animations they had in mind.

“Most of the time, if someone says, ‘Do you want to do animations?’ you say, ‘Yes,’ when you need a job. You don’t usually say, ‘Hey, look at this bottle project,’ to a person from NASA, expecting them to be enticed by it. But I took the risk, and it paid off,” said Goods. He was told he’d get six months, and then they’d re-evaluate. That was 10 years ago.

It didn’t take long for Goods to make his mark. One of his earliest projects, “The Hidden Light,” illustrated the difficulty of locating planets, which are often obscured by the blazing light of much larger, brighter stars located nearby. “They have an analogy [that] if there is a firefly in front of a spotlight in New York, you’re trying to see it from Los Angeles,” he said. “That gives you a sense of the difficulty and challenge.”

Goods faced his own challenge in turning this idea into a compelling experience for the public. The result was brilliant in its simplicity. He trained two light sources onto a blank, outdoor wall: a movie projector and a 20,000-watt spotlight. Because the spotlight was so much brighter than the projector, people could only see the projected film when they stood in front of the spotlight, blocking its luminosity. As visitors experimented with the different ways their shadows could reveal the image on the wall, the installation became a throng of walking, dancing, playing and, perhaps inevitably, shadow puppeteering.

The artist’s other projects for JPL have all shared Goods’ signature originality and sense of wonder. For “The Big Playground,” he drilled a hole in a grain of sand and placed the object under a magnifying glass, a display meant to depict the relatively tiny number of planets discovered in the Milky Way. Meanwhile, six rooms filled with sand represented the galaxies still awaiting human discovery.

The cosmic aspirations of NASA employees inspired another installation, called “For Those Who Dream, Far Away Does Not Exist.” Set within a darkened room, the piece projected shifting, colored lights onto blocks of aerogel, a nearly weightless material used on the twin Mars rovers, Spirit and Opportunity. The stunning interaction between light and this space-age substance created an ethereal installation that was a dreamscape all its own.

Despite the endless inspiration space may provide, Goods has come to serve as something of a muse himself. In recent years, he and his team — which now includes people from the worlds of architecture, advertising, film, special effects and product design — have expanded their role, and are beginning to help design actual missions. While the experts still handle a mission’s technical details, Goods and his crew help spur out-of-the-box thinking, which is so necessary for the study of space.

“When scientists and engineers come to our studio, they’re in a mindset that they want to be in a creative space,” said Goods. “They feel permission to be more creative because we’re around.” For mission design, especially, “We’re trying to figure out how our role can enhance the thinking and creative process they have.”

In turn, Goods’s own creative process has come to resemble something akin to the scientific method. After meeting with scientists and engineers to determine “what is meaningful and powerful and interesting about a topic or a person,” he asks questions, conducts research, experiments, fails and then experiments again. “Hopefully,” he said, “you succeed at some point.”

And succeed he has. Throughout his career of melding art and science, Goods has managed to continuously capitalize on a central component the two fields share: their ability to make people step back, open their eyes and see the world — or in this case, the universe — in ways they never had before. Goods, however, had a different way of putting it: “I’m hoping I can create things that make people go, ‘Wow.’”

This article first appeared in issue 2013 number 3 of NEA Arts, the quarterly magazine of the National Endowment for the Arts. The NEA is committed to encouraging work at the intersection of art, science and technology through its funding programs, research, and online as well as print publications.

The views expressed are those of the author and do not necessarily reflect the views of the publisher. This version of the article was originally published on Live Science.