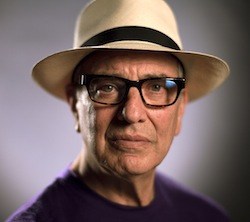 It is with great sadness that I write to inform you of the passing of our colleague and member of the film faculty, Michael Gottlieb.  Michael was in a tragic motorcycle accident late last week, and we are deeply pained by his loss. He was 69 years old.

Writer/Producer/Director/Photographer Michael Gottlieb was raised in New York.  The man whom he thought of as a father, Dr. Francisco Marino, was a prominent psychiatrist who mentored Michael through his teen years and beyond. Michael began his professional career working as an assistant on film and photo shoots and found great success as a fashion photographer. This, in turn, led to his becoming a Clio Award-winning commercial director and cinematographer, making many national spots for such clients as Xerox, Coca-Cola and McDonald’s.

Michael’s extraordinary commercial work brought him to the attention of film studios in Los Angeles, where he started yet another career as a movie writer/producer/director. His credits include:  Mannequin (1987); The Shrimp on the Barbie (1990); Mr. Nanny (1993) and A Kid in King Arthur’s Court  (1995).

Film Chair Ross LaManna remembers Michael with great respect and affection: “Michael Gottlieb was superbly talented in an unusual number of creative disciplines. His love for his students and generosity with his time and expertise were second to none.  He mentored, guided, cheerled and scolded hundreds of students through the challenging process of writing a feature-length screenplay, and took enormous pride in their accomplishments.”

Michael was a member of the Writers Guild of America, West and the Directors Guild of America. He will be deeply missed by the Art Center community.  He is survived by three daughters, and our hearts go out to them and all of his family and friends.