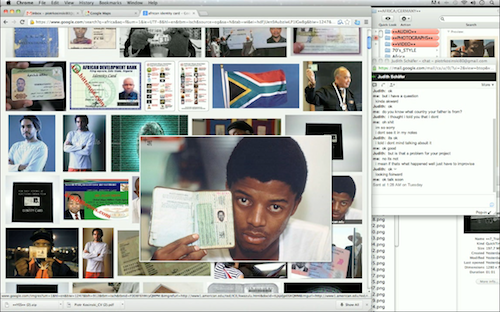 Working Title (I Am Not Your Father), 2013, by Filip Kwiatkowski. HD video projection with sound

Warsaw-born video artist Filip Kwiatkowski (Grad Art, MFA 2013), who earned his BFA in film and television at the Tisch School of the Arts, came to Art Center after a successful career as a freelance photographer in New York. Shortly after completing his MFA in Art Center’s Graduate Art program, Kwiatkowski was awarded a fellowship at the Academy of Media Arts in Cologne, Germany, where he had studied as a participant in an Art Center exchange program. In his work today, Kwiatkowski continues to explore issues that fueled his graduate film project: how media interfaces transform personal narratives, shape behavior and create “a circumstance in which the relation between private, public, work and personal time are increasingly hard to separate.”

The Dotted Line: Why did you choose to relocate from New York to Los Angeles and pursue a graduate degree at the Art Center?

Filip Kwiatkowski: I came to Art Center in the pursuit of autonomy outside of the commercial sector. I decided to get my MFA specifically because I didn’t want to continue working as a freelance photographer. I had always worked on my own projects and along the way I started getting hired by magazine and other clients, but at some point the line between art and commerce became blurred for me. Key for me was Art Center’s combination of academic courses, workshops and lectures, which had the promise to culminate in developing an artistic practice in the studio. Obtaining my MFA is something that I take pride in, because it gave me the tools to move forward as an artist.

TDL: How did Art Center change your views about art production?

FK: Coming from a photography/film background rather than fine art, I found that Art Center really opened many new possibilities for me. Not only was I able to catch up on art history, I was able to dive into the discourse that is happening in art today.  Overall, I was able to start thinking about art production as something that is open-ended rather than definitive.

My impulse as a photographer was to define things through the images that I produced, but as a student at Art Center, I realized that the type of art I responded to raised questions and challenged the viewer. To me, this seems more productive, as the world we live in is multifaceted and utterly undefinable.

TDL: What are you working on now?

FK: I am continuing my research into the two things that I am most interested in: the way that new media transforms the temporal form of the narrative (specifically in the space of cinema), and the historical and present day narratives of immigration contextualized in our global economy, where the word immigrant has taken on a new meaning. This will hopefully lead to a video piece or possibly a performance with video components.

TDL: What advice would you give students entering the Grad Art program that might help them make the most of the experience and the resources that Art Center offers?

FK: Other than working incredibly hard and leaving your ego behind, let go of any preconceived notions of art.  Rather than making something that fits into an art context, make whatever you want. We’re not there to please anyone, but to work toward our own personal goals. The faculty-to-student ratio was immensely helpful in my development as an artist and doing studio meetings with so many varied points of view meant that there was almost no stone left unturned in the work. Sometimes, I would have almost 30 disparate voices pulling me in different directions, which was a great way to be pushed into developing my own point of view. I found the time spent with fellow candidates to be a valuable feature of the program and I hope it will continue to be for years to come.

Stan Douglas is a faculty member in the Graduate Art Department at Art Center. Lynne Heffley, a Los Angeles-based freelance journalist who writes about the arts, also contributed to this article.