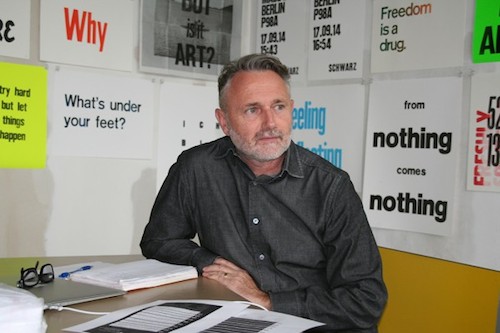 The following interview with Graphic Design faculty member Simon Johnston originally appeared in Superior Magazine. We’re republishing it here because it’s incredibly illuminating about Art Center’s BIKINI Berlin program as well as the depth of Art Center’s iterative process. And it’s not every day that a faculty member makes the pages of a men’s fashion magazine!

We live in a world that is controlled and dominated by technology. But students from Art Center College of Design, who are currently guests in BIKINI Berlin, have carried out an experiment. Banned from any technology, they focused their creativity on the actual process of design, and worked with analog methods and tools in their creative process. The results are remarkable, and will be shown in the form of an exhibition on November 20th. This project is directed by the designer and typographer Simon Johnston.

Superior Magazine: Simon, please tell us something about your personal and your professional background.

Simon Johnston: I was born in Leamington Spa, England, and went to Bath Academy of Art. After graduating, I lived in Switzerland, where I attended the Kunstgewerbeschule in Basel. I studied with Armin Hoffmann and Wolfgang Weingart and had an inspiring time there. Then I moved to London, where I spent the next 7 years and founded a design studio called “8vo.” We published a magazine called OCTAVO, a typographic journal about using letterforms in design and the arts. Finally I moved to California, where I have been living now for 25 years. In my current practice I design books for museums and galleries, and work as a professor of design at Art Center College of Design, in Pasadena, California.

SM: So there is a connection between Art Center College of Design and Berlin?

SJ: Yes, the school recently developed a relationship with BIKINI Berlin. Prof. Nikolaus Hafermaas, head of the Graphic Design department at Art Center, had the connection with the management of the building, so he was able to negotiate a studio space here. He also asked me at the beginning of the year if I would be interested in leading this particular project. I have worked a bit in Germany before, so I liked the idea of coming back and working here for 12 weeks. I really love California but I need my European visits. 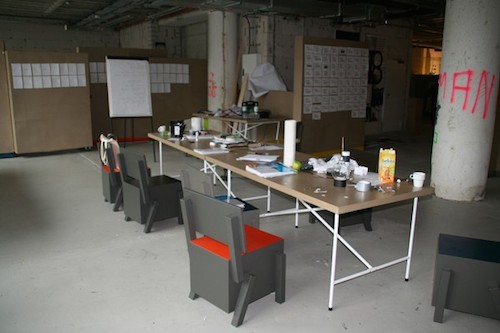 SM: How is the system of Art Center College of Design structured and where do the students come from?

SJ: The students are all based in Los Angeles, but come from all over the world. The Berlin program was advertised last semester as a program run by the Graphic Design department, but it is also open to other departments, so we have Illustration students, graphic designers and Interaction Design students as well. Every term we have a group of students coming over to Berlin. The students are able to explore the city and work on projects, so they are able to get in contact with the German culture. Fortunately it is working out very well, and we were happy to come here and work on a new kind of project, which is mostly about the idea of being unplugged and working without computers and smartphones just as an experiment.

SJ: The idea is to step back from using any kind of digital technology and to create art and design through analog techniques. The current generation is used to doing almost everything on their computers, and this is particularly true for designers. One of the ideas here was to remove ourselves from the need to be totally dependent of technology and see how creative you can become with humble, simple materials that are around us. Just working with straightforward materials and processes like letterpress printing, collage and hand work. 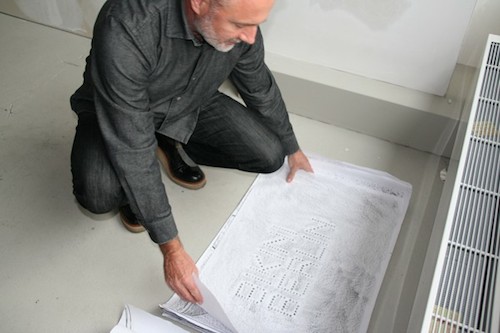 Digital technology can be a blessing, but it sometimes restricts your thinking in certain ways instead of opening your senses for the creative process. So for example, the students had to start working without using any smartphones for navigating the city. We called the first six weeks the “digital ramadan.” The second phase is called “OK Computer” as they are allowed to use digital tools to complete the presentation of some analog projects.

SM: If you look at it in more detail, then the experiment is not only artistically but also mentally an interesting challenge, right?

SJ: It is interesting what they have discovered. A secondary goal of the program is to reflect and think about this process. They had to write down notes about their perceptions of working without the tools that they are normally dependent upon. The real challenge is to see what conclusions we can ultimately make, to find a better balance with technology in our lives, not just as designers but as people.

Without smartphones, the students were getting lost but in a good sense, because they found themselves going down streets they wouldn’t otherwise have gone down, finding interesting restaurants, cafes and bookstores. And so, chance and coincidence play an interesting part in the creative process, whereas everything is overly coordinated while working with the computer. Part of the intention is that from the starting point, you don’t know where the final result is going to end up. Creativity comes from a kind of positively curious uncertainty, and a willingness to immerse yourself in the not-knowing aspect of the working process.

SM: So the working process can become the end result?

SJ: Right. Students often want something immediately without understanding the numerous steps which are needed to achieve the final result. After initially getting frustrated that the process was taking too long, they became accustomed to working with what was immediately available in their surroundings. They formed a habit of collecting everything just in case it could be interesting or useful for the project. It does not work to wait for an inspiration to descend from heaven, you have to start making something, then react and remake and continue to rework and refine. There is no such thing as a mistake in this process, only learning.

SM: Do you see a difference in your students from the first day of the “digital ramadan” until now?

SJ: Of course there were moments in which the students yearned for their phones to research something, call friends, or design on their computers. But on the whole I know they were happy to have had this experience. They signed up for it! Many students have come to the conclusion that creativity and activity go hand in hand and should not be completely taken over by technology. We need unmediated senses to be fully present in our world. Maybe the biggest lesson is that we need to ration our dependence on digital technology.