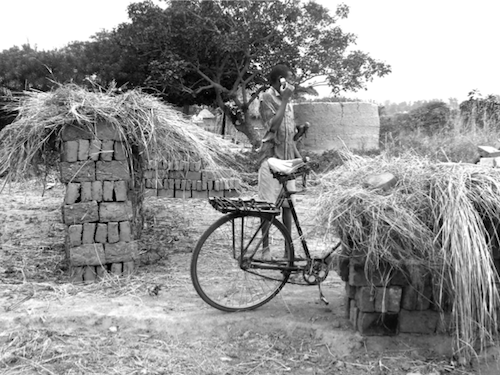 Mike’s brother in a brickyard, talking on his cell phone. Like many Ugandan villagers, he makes bricks for a living. Once piled into a tall structure, the bricks will be fired in place then sold. Photo by Elizabeth Chin

In a small village in eastern Uganda, I sat on the porch of my host’s home. A retired head teacher, he has a rumbling, stentorian voice that commands authority. As we sipped tea, he looked over at me and asked: “Is it true that in your country it is legal for a man to go with a goat?”

After a moment, I sputtered, “Well, no!”

He considered my answer. “But it is legal for a man to go with a man?”

He continued, “And for a woman to go with a woman?”

He didn’t seem shocked or disgusted. He struck me, rather, as utterly mystified. Our awkward silence was broken when the children start arriving home from school—at least 20 of them who ranged from mid-teens to teeny tiny. Their parents, sons and daughters-in-law of my host, occupy their own huts in this compound or nearby. As each child arrived, he or she came and sank down on both knees, offering a hand from this kneeling position. This traditional greeting was performed for each adult in the compound.

Since my arrival in Uganda in late January, the news both in and out of the country has been dominated by discussion of two controversial laws, one declaring homosexuality illegal, and the other an anti-pornography law that has somehow been interpreted as an anti-miniskirt law. Both laws are draconian, mean-spirited and wrong-headed. Despite this, however, Uganda strikes me not as a country full of bigotry and violence, but rather as a deeply conventional country that is facing—like much of the global south—rapid and destabilizing changes to its society. Blessed with fertile soil and abundant rain, huge swathes of verdant land have already been taken for corporate-owned tea and banana plantations. Now that the carbon credit market is heating up, so to speak, foreign interests are busy planting pine forests to earn themselves some environmental points. Pine trees, it turns out, are excellent at absorbing carbon dioxide and emitting huge amounts of oxygen. They are not, however, native to the equatorial tropics; they ruin the soil permanently, and are among the reasons that the peasant farmers who constitute the overwhelming majority of Uganda’s population are increasingly without land or means of livelihood. To the west, oil has been discovered, disrupting land ownership there. China is busy building sleek highways in that direction, providing infrastructure in exchange for access to precious resources. In the north, where conflict seems never to abate, scuffles between anti-government forces are hard to tell from the bleed-over from what looks more and more like civil war in South Sudan.

In these and so many other instances, foreign imperatives and agendas come together to make most Ugandans’ lives much more complicated and miserable than they otherwise might be. With a government that depends for the bulk of its budget on foreign aid, the degree to which the nation is indeed sovereign seems just a tad in doubt. President Museveni, who has held power for 27 years, must take pains to assert his control. On one side, he has to deal with a parliament whipped into a frenzy with drafting these silly laws, now including one punishing people for “willful” transmission of HIV. On the other, big brother-y interests such as the United States and the IMF threaten to put a choke hold on the economy if he enforces the anti-gay laws (apparently the anti-pornography law is not disturbing enough to the international community to warrant a response). What’s a despot to do?

It is in this context that the anti-homosexuality and anti-pornography laws seem perhaps less about punishing specific people and more about asserting some sort of Ugandan independence. In fact, there are pockets of people who argue—either separately or together—that homosexuality, miniskirts and evangelical Christianity are all colonialist imports to Uganda that ought to be stamped out. As one friend remarked to me, “and THAT interpretation is just twisted enough to make a liberal think twice!” It certainly seems quite clear that the emergence of the government’s obsession with homosexuality can be traced to evangelical Christians from the United States, who have been hard at work for some time on spreading their ideas abroad. In particular, their efforts center around making homosexuality the object of legislation; anti-gay violence is the not-so-surprising side effect. Now, there is no doubt that Uganda is not exactly a gay-friendly country. On the other hand, absent the efforts of these extremist and hateful Christians, homosexuality previously was not a particularly hot-button issue. Nor were miniskirts, although it is true that women can expect quite a bit of pawing, ogling and other unpleasant reactions from men if they wear tight or revealing clothing in public places. What appalls me most about the situation is the degree to which so many everyday Ugandans—gay and straight—end up suffering for other peoples’ self-serving agendas.

Elizabeth Chin joined the faculty of Art Center in 2011 as a founding member of the Media Design Practices/Field program. As an anthropologist her practice includes performative scholarship, experimental writing and collaborative ethnography. Her book Purchasing Power (Minnesota 2001) was a finalist for the C. Wright Mills Award. In 2007 she won the AAA/Oxford University Press Award for Excellence in Undergraduate Teaching of Anthropology.