“Being part of a community that provides support and critique is important,” said Media Design Practices (MDP) Chair Anne Burdick as she kicked off the department’s first ever Faculty Work-in-Progress show on a recent Thursday evening in Art Center’s Wind Tunnel gallery space. “It’s really a super amazing gift.”

As the MFA program’s twelve faculty members’ presentations unfolded over the next two hours, it quickly became clear that Burdick was not overstating the rewards of her department’s commitment to open dialogue. The event, which Burdick hopes will become a regular piece of programming, was organized around the following theme: a piece of something bigger. Faculty responded to that imperative with a series short presentations of unfinished projects they’re cultivating in their private creative practices. 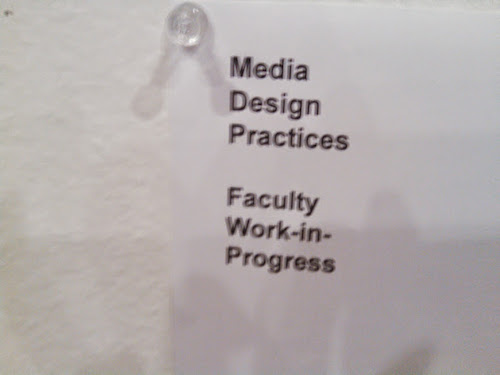 Johnson (MDP, ’09) lead off the proceedings with a discussion of his work documenting the design studio culture within large organizations like Nokia and Jet Propulsion Laboratory. Johnson approached his role as a design researcher for each organization with humanistic hypothesis. “The way a studio behaves is related to the things it makes,” said Johnson, who used his observational research to create a kind of behavioral best practices booklet, which was more anecdotal than prescriptive. “I came to see that a happy studio makes more interesting products than an unhappy one.”

Ultimately his findings, contained within the posters and publications he produced, became valuable tools for both the HR (to help new employees acclimate) and marketing departments (offering insight to consumers about the culture producing the products). 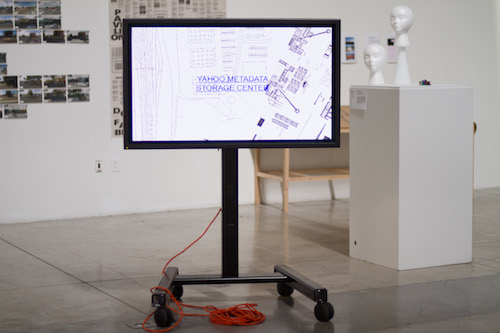 Hooker is a multimedia artist whose work explores “the intermingling of the phenomenal and intangible worlds of physical materiality and electronic data.” Seated in front of a large monitor toggling between industrial images, transportation maps and blueprints, Hooker began with a deceptively simple mission statement:  “I’ve long been interested in screens and how they draw us into disconnected worlds.”

Citing the ubiquity (and distracting appeal) of screens in public gathering spots like bars, Hooker has been exploring the ways in which our mediated world poses a “threat to identity and selfhood.” He’s currently focusing his research on questions around the designing physical spaces that integrate and incorporate screens in unobtrusive ways, “rather than grafting screens onto those spaces later.”

Rubinyi begins with an introduction of her polymath professional credentials. “I’m an architect who went to art school and became a transportation planner,” she said with a laugh. “By always residing outside my comfort zone, I get to see how decisions are made in business and I get a lot out of that for my art practice.”

Her creative life revolves around photography and an interest in looking at connected cities, autonomous vehicles and the future of transportation through an artist’s lens. 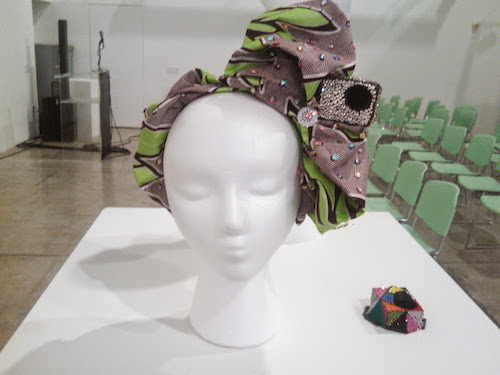 Form and function fluidly fuse in Elizabeth Chin’s bedazzled headbands and headdresses made of native African fabrics, which act as a fashionably discreet carrying case for a GoPro. Her crafty camera obscura experiment emerged out of her decision to live by what she had been teaching MDP field track. “I wanted to challenge myself to do what I tell my students, which is to allow the objects you create to make the argument rather than using words,” explains Chin, who focuses on the anthropology of technology. “I’m very interested in exploring narratives about tech as it progresses. We think of GoPros as being for white guys who do extreme sports with their dogs. But what if they became an expression of fashion, specifically African fashion?” 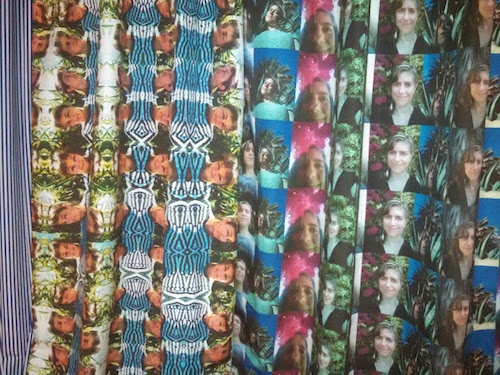 Ever since they met as students at CalArts, Wyman and Mayer have been working as a collaborative team they’ve dubbed CamLAB, creating relational art  informed by the following ideals, outlined on their blog: CamLab believes that a contemporary politics of pleasure must acknowledge the contiguity of language and body in facilitating a spectrum of experience that includes alterity, intimacy, and humor.

CamLab’s current project certainly covers many of those bases. While doing field work in El Paso, CamLab created a literal conversation piece by making and wearing fabric featuring a collage of selfies they’d taken of themselves. By wearing their faces on their sleeves, they became human conversational prompts, provoking questions from locals about the hows and whys of their customized clothing.

Combining his MS in Security studies and his MFA from UCLA, Wheeler has been a collaborator in the community generated art project, Incendiary Traces, lead by Hillary Mushkin, an artist who acts as a liaison between Art Center and Cal Tech. Wheeler’s field work includes taking artists out to military training sites in 29 Palms, immersing them in a fake combat environment constructed to conjure the unknown variables. 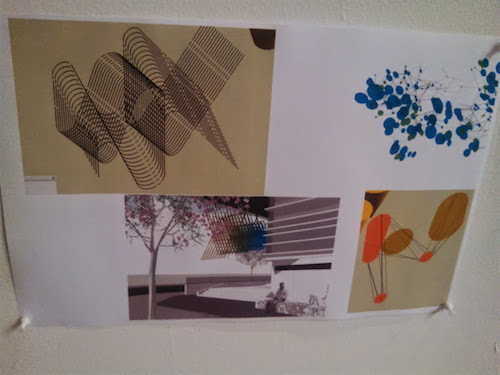 Informed by his interest in emerging technologies, Schwartz has created a series of drawings based on patents from the early 1900′s through the present, tracing the connections along the continuum from the mechanical to the electronic to the human.

Durfee maintains an active architectural and art practices in addition to his teaching duties with MDP. He has combined all three elements in a piece of public art he created for the LAPD’s East LA Station, which riffs on the rays of sun illustrated on the police shield, offering a provocatively analogous nighttime image of the helicopter spotlights beaming down upon the cityscape.

Donahue created a large-scale wall collage of his writings on social impact design. The excerpted texts were written for different contexts —conference presentations, essays, proposals—offering Donahue the chance to step back and explore where he wanted to take his writing practice next.

The Chair of MDP assembled a set of printed quotes from the reading she had done over the winter break, including this one: “readingwriting: The practice of writing through the network as it tracks, indexes and algorithmizes every click and text. It is itself constantly reading our writing and writing our reading.” Burdick had assigned four books to students and spent the time off reading all four tomes as preparation for a proposal with a looming deadline. With the material fresh in her mind, Burdick engaged with the students to think collectively about the ideas encountered in the readings and how they might play out in their practices.

Arden Stern is an historian whose current research and teaching interrogates the intersections between urban growth, globalization, and design. She has conducted research on articulations of locality and global citizenship in the grassroots graphic design of Zambia, and has also written and lectured on American typography and printing. Currently she is researching the changing visual landscape of Highland Park, looking at the difference between urban signage and painted surfaces and how buildings and their surfaces change over time.

Both an artist and a journalist, Leonard uses interface design, video/photography, augmented reality and physical computing as a means to exchange empathetic experiences. His recent experimentation with material and shape culminated in a piece he created for a show in Detroit exhibiting sculptural pieces he’s created out of vacuum forming plastic, which takes the shape of the form upon which it’s superimposed.