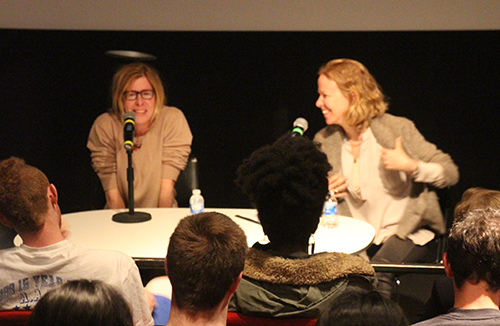 “Leaders in art, film, business and design practices, our speakers have changed both the questions we ask and the solutions we might find when it comes to thinking about 21st-century culture,” says Humanities and Sciences (H&S) Chair Jane McFadden, who curates the series, Art Center Dialogues.  The most recent speaker was Dede Gardner. Her long list of producing credits in film and television include award winners such as Tree of Life and 12 Years a Slave, as well as box office smashes World War Z and Eat Pray Love. As President of Plan B, (Brad Pitt’s production company), she has overseen the creation of dozens of films with some of the industry’s top talent.

The auditorium was at capacity with students eager to participate in the Q & A, followed by a screening of the Academy Award nominated Selma, her most recent project. Gardner was on campus to talk about leadership, and much to the pleasure of the crowd, a little insider gossip. When an audience member asked if she was able to speak about Andrew Dominik’s Marilyn Monroe project she said, “Yes, do you have eighteen million dollars?” Or, when a student inquired if she would do everything the same again, starting over as a 16 year-old, she quipped, “Can I start at 36, instead?”

If you missed it, here are a few other highlights from the night:

On the future of women in the film industry: “There’s less hope if you give up, you can’t give up… You’ve got get our there, make stuff and claim space. I do think it’s getting better… There are a lot of amazing women making movies and I do see more and more. But there’s a lot of other stuff that needs to happen, we have to go to movies that women make! We have to buy those tickets. That’s how women are going to get those gigs. We should probably figure out how to keep films in California too, so that women can still raise kids – because that is a reality.”

On the relationship between real events and their depiction in films: “We are a culture that is conditioned, over and over again, for our stories of hope to have been achieved in a particular way, cast a particular way, with people of a particular color, and I don’t think it’s how it went down. I think that there are multiple perspectives every single time. I did a movie called The Mighty Heart about Daniel Pearl’s execution in Pakistan. I spoke to the seven people who were there, trying to find this guy. They have such specific and different perspectives and they’re all valid.”

On pursuing idealistic projects: “It’s not a good business plan but it’s going to make you happier… If I had said to someone, when we were trying to get 12 Years a Slave made, that we would make 180 million dollars, they would have said, ‘yeah, right.’ But it did… Everyone worked on that movie for five years for free. My line producer did 700 budgets. We built this thing that was big enough that people couldn’t ignore it.”

On producing: “At its greatest form it’s a curatorial, very artistic, funhouse. It’s about narrative, the writer, the director and the cast. The where, and how, and with whom – and you’re a mama bear keeping all the mean people away by building moats around your movie!”

Sponsored by the Toyota Motor Corporation, Art Center Dialogues is the most recent manifestation of a decades-long lecture series at the College designed to catalyze creativity with criticality and community by bringing in guests that inspire discussion and broaden perspectives. This term, the series’ focus is on creative leadership. The next guest is Jessica Yellin, television journalist and former CNN Chief White House Correspondent to be hosted by Jane McFadden, Chair, Humanities and Sciences Department, and Wendy Adest, Chair, Integrated Studies Department. Date and location are TBA.

One thought on “Art Center Dialogues: Dede Gardner on leadership in Hollywood”