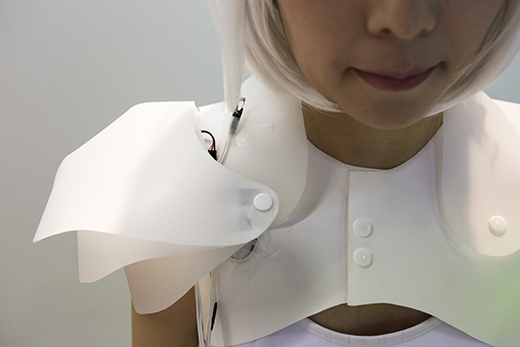 We have less than a month to go before the Apple Watch either launches wearables into the stratosphere or delegates the product category to the 21st-century equivalent of a Tamagotchi.

Well, okay, it’s actually not that simple. In fact, numerous signs over the past five years point to long-term interest in the field: Fitbit’s popular activity tracker, first released in 2009, continues to sell well; Pebble, which shattered Kickstarter records in 2012 to fund the creation of the first ever smartwatch, is gaining praise for its latest crowd-funded iteration; and last June, LG and Samsung released smartwatches running Google’s Android Wear operating system, and companies like Sony, Asus and Huawei have since followed suit.

But for years now, Art Center students have been looking beyond activity trackers and smartwatches and instead exploring a myriad of future possibilities for wearables. 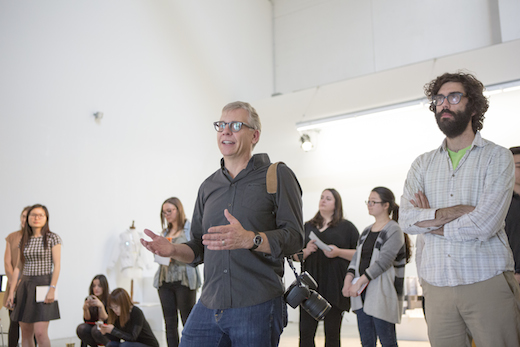 And two weeks prior, MDP students enrolled in Seams and Super Powers, a four-week intensive studio course taught by Van Allen, showed off a new round of projects that used the emerging ecosystem of wearables integrated with the Internet of Things as a launching pad to create thought-provoking, and sometimes absurdist concepts, prototypes and investigations.

Wondering how the course got its name? “The studio explores how the ecologies formed by wearables and the Internet of Things create something like superpowers for people, overcoming their contextual and temporary ‘disabilities,’” says Van Allen. “I also wanted the students to look at how gestures and interactions with wearables form an important seam between people and their digital life, and carefully design how automatic/seamless or more intentional and ‘seamful’ these interactions should be.”

The projects, which all included working, cloud-connected electronics, ranged from political to sci-fi and everything in between, and included: 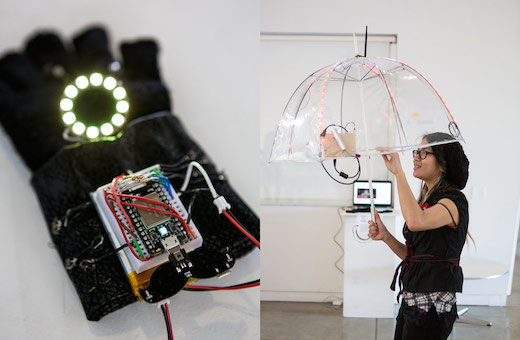 Elaine M. Cheung’s Intravoice: Materializing the Social
Inspired by last year’s Umbrella Movement in Hong Kong as well as the Arab Spring of 2010, Cheung designed a series of devices including umbrellas that, when in proximity with one another, form a private network. When faced with a government shutdown of the Internet, protestors and oppressed citizens alike could join their umbrellas together and ensure their message and experiences are transferred from person to person so they could eventually be broadcast to the world via social media. 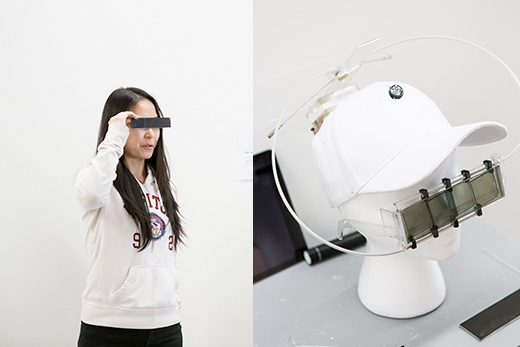 Shixie Xiangjun’s Wearable Privacy Device
Taking its cues from the shadier elements of social media, Xiangjun’s project is a tongue-in-cheek exploration of what might happen if individuals could instantly hide or reveal their physical identity. Inspired by Internet trolling, her device renders a black bar over the wearer’s eyes, allowing the user to “disregard all social contracts” in real life and to exist in a state in which “action becomes unaccountable.”

Zhihan Ying’s and Giselle Guo’s App Couture
Ying and Guo imagined a retail store experience in which shoppers buy high-tech fashion accessories that respond to already familiar motions and behaviors. Scratching your head might call up your daily schedule; a tapping sensation on your shoulder could indicate incoming emails; and bending or straightening your knees can tell your integrated information system whether you’re in “work” or “relax” mode.

Selwa Sweidan’s Radical Sensing: Architecting the Nose and the Sense of Smell
Sweidan described her speculative project as being rooted in “the sense of smell as an internal process” that can be altered and enhanced. Her project imagines a future, 15-20 years from now, in which people have chosen to replace their noses with a “super smelling” neural prosthetic (or a “post-nose nose”) that amplifies, isolates, decodes and records scent with simple gestures and downloadable customizations.

Beyond being an academic course, Seams and Super Powers is doing double duty as MDP’s participation in Microsoft Research’s 2015 Design Expo. Either one or multiple projects from the course, as well as the students who created them, will be selected to travel to Seattle later this summer to present their work and participate in the annual event.