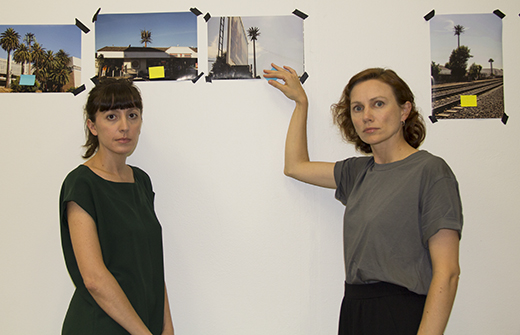 You know those artificial rocks people use to hide pipes, pumps and other domestic structural elements deemed too aesthetically displeasing for a proper residential landscape? Turns out they’re not the most comfortable objects to sit on for an extended period of time.

Nevertheless, that’s how I spent 45 minutes last week—sitting atop wheel-mounted fake rocks and talking with their creators, Asli Serbest and Mona Mahall, the Stuttgart- and Istanbul-based art, design and architecture duo who go by the nom de guerre micro architecture unit star energy ray, or m-a-u-s-e-r for short.

I met with them to discuss Natural Wi-Fi, their research project that culminated in an installation in Wind Tunnel Gallery, part of ArtCenter’s Graduate Center for Critical Practice, that explored the material byproducts of the Internet as well as how Nature has become the online world’s aesthetic obsession. 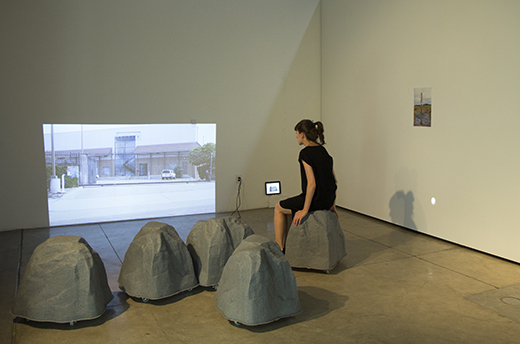 Serbest and Mahall’s investigation was selected by Media Design Practices (MDP) in response to a call for proposals for the graduate program’s annual summer research residency by a jury that included Marko Tandefelt, Cher Potter and MDP’s own Sean Donahue and Mimi Zeiger.

The design residency supports experimental design practices and projects that defy conventional design categories. Its threefold purpose: to generate research that advances the field; to reinforce the College’s Wind Tunnel Graduate Center for Critical Practice’s commitment to bringing critical thinking and conceptual inquiry to art and design; and to give MDP graduate students firsthand experience working with cutting-edge thought leaders in design.

“We applied to the residency because we’re interested in the relationship between architecture and Internet culture and we were attracted to Media Design Practices’ critical attitude toward making,” says Serbest who, along with Mahall, co-chairs the Foundations of Design and Experimental Architecture department at the Stuttgart State Academy of Art in Germany. 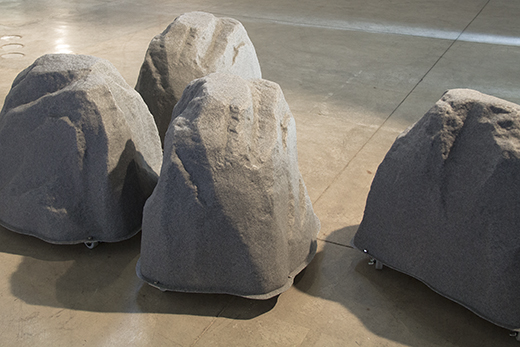 Mahall adds that they were also drawn by the multidisciplinary nature of MDP’s faculty as well as the program’s innovative Lab and Field tracks. “There are many disciplines coming together, which is very important for the students. And offering the different Lab and Field tracks is a pioneering idea and something that I think will only become more important in the future.”

Their research took them from the mundane—ordering the aforementioned “rocks” from online vendors—to the surreal—visiting nondescript sites in Northern California designated as “critical infrastructure” by Homeland Security—and in the process they unearthed fascinating links between the shrinking physical world and the expanding digital space.

“The Internet is evolving into a super, totally inescapable system,” says Mahall. “At the same time there is an obsession with hiding it, making it invisible, letting it dissolve into the environment.”

One dramatic example she points to are the cell phone towers peppered across the Southern California landscape disguised as palm trees, pine trees and even cacti. Mahall believes this camouflaging is a reaction of sorts to the Internet becoming what she and Serbest like to call “the total interior,” a ubiquitous digital sphere that can be tapped into anywhere and at any time. 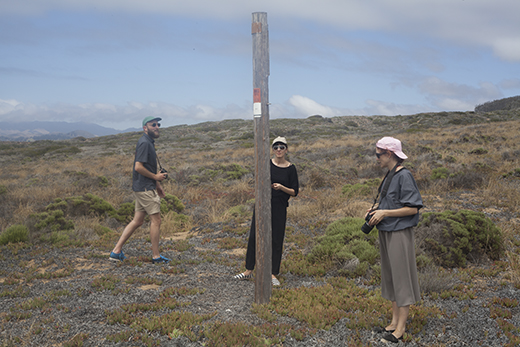 “Today, for Western countries at least, there’s no wilderness, there’s no ‘outside’ left,” says the Germany-born Mahall. “Everything is internal to the system and to the economies of the system, so there’s a romantic desire for capital ‘N’ Nature, which used to embody things like the uncontrollable or simply the beautiful.”

Hence, Serbest says, the desire to make our technology invisible or to at least camouflage it as best we can. She points out how for years both Microsoft and Apple have included nature-themed desktop wallpaper with their operating systems—from Windows XP’s iconic rolling green hills to OS X Yosemite’s sunset-drenched images of Half Dome.

“We even found this desire to mask technology with nature when we were researching computer desks from the 1980s, which were often advertised with plants or zen rocks placed on top of them” says Serbest, who, along with Mahall, publishes Junk Jet, a zine that focuses on “wild forms, found objects, and weird theories” and which will print findings from their research in the near future. “We even found descriptions on how to bring your computer desk into feng shui balance.”

Quite often these attempts to camouflage technology transform into absurdities, whether it’s a comically overgrown fern threatening to overtake a clunky pre-Internet PC or the double-takes brought on by a cell phone tower trying its hardest to look like a tree (and a non-native species to boot). 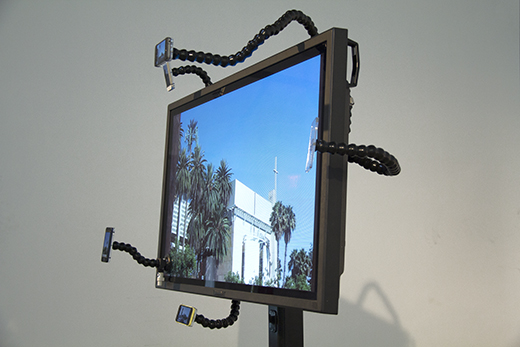 This “tree” is part of Serbest and Mahall’s Natural Wi-Fi installation. Photo: m-a-u-s-e-r

Which is why Mahall and Serbest have created a number of absurdities for their installation, objects that simultaneously embody and offer commentary on the findings of their research.

So a “tree” made out of a television monitor and several iPhones loops videos of physical sites designated by Homeland Security as “critical infrastructure,” including a Northern California spot where the fiber optic cables that stretch all the way across the Pacific Ocean can be easily tampered with by anybody willing to dig a few feet underground.

And hollow artificial rocks designed to hide sprinklers or gas meters are outfitted with wheels to become barely functional installation viewing seats. The fact that these “seats” were made entirely out of objects ordered from Amazon and eBay hints that the merging of the physical and digital realms may not be completely seamless and comfortable.

“We plan to sell the seats on eBay,” says Mahall. “They came from the Internet, and now they’ll be returned to the Internet.”

Portions of Natural Wi-Fi, along with other works created by MDP students and faculty, will be on view in the Wind Tunnel Gallery from September 17 through October 30, 2015, as part of a preview for Now, There, an exhibition curated by Mimi Zeiger and MDP Professor Tim Durfee for the 2015 Shenzhen/Hong Kong Bi-City Biennale of Urbanism/Architecture. More information can be found here.