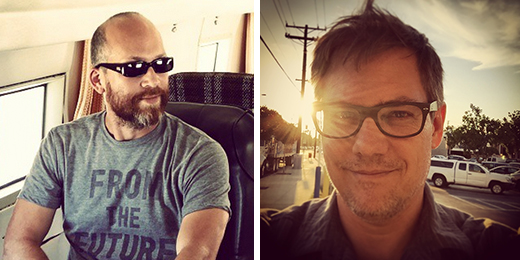 “Let’s say you’re a designer and you want to make the new logo for a company a blue flower,” says artist, designer and ArtCenter at Night instructor Jonas Kulikauskas, throwing out a hypothetical scenario to explain what students enrolled in this Fall term’s upcoming Creative Intelligence course will be learning. “Okay, but why blue? And why a flower? Those decisions need to have a business rationale.”

Kulikauskas co-teaches Creative Intelligence with JR Curley, the creative director and founder of brand and strategy firm Panagram. The two worked together at multinational professional services firm PricewaterhouseCoopers, where Curley was the overall leader of a national creative team of more than 100 employees and Kulikauskas was a leader on said team.

Together, the two have a bevy of experience explaining the business rationale behind their decisions. “We worked in a company with 40,000 corporate types,” says Kulikauskas about their internal clients. “They didn’t know how to speak our language. We had to speak their language.”

But in order to do that, they first had to understand their company’s business, adds Curley, who says the ability to combine creativity with business intelligence makes a designer truly invaluable to an organization. “Speaking to the client in their language immediately ups your game,” says Curley. “The moment you walk in the room and you talk to them using their acronyms and terms, they start to value you as an equal.”

Which all sounds great. But how do creatives actually get to the point where they can start having those conversations in the first place?

That gap was actually the impetus for the course, say Curley and Kulikauskas. Again, going back to their PricewaterhouseCoopers days, the two of them attended many weekend seminars, classes and trainings that would fill them with ideas and inspiration, but provide no tangible tools they could take back to their team.

“That’s tough for creatives,” says Kulikauskas. “If leadership sends you away for a week, you want to come back and show them how you’re going to implement what you’ve learned, whether it’s streamlining operations, saving money or training your team to do something specific that will add value to the organization.”

Which is why, by the end of the 14-week course, students in Creative Intelligence will have created a roadmap for their creative and entrepreneurial pursuits. What each roadmap looks like will depend on the individual project, but they’ll all incorporate research, logic and business rationales, along with actionable items to enhance visibility, differentiate from competition, streamline operations, and impact sales, brand and social media.

“Let’s say you’re a student and you have an idea for a stuffed animal you want to market,” says Kulikauskas. “Your roadmap would cover the process from start to finish, but you’d also want it to help you expand your horizons. Maybe your idea is actually about a family of stuffed animals. Or a game that incorporates your stuffed animal. Or a social media experience.”

And that word “experience,” says Curley, is really important.

“I don’t think about design so much as delivering the ideal experience,” says Curley, whose own experiences often incorporate ideas he’s gained from experimenting with the latest cutting-edge technology. “We’re getting away from ‘We do graphics’ and more to ‘We deliver an experience.’ That’s why the class isn’t called Designer Intelligence but Creative Intelligence.”