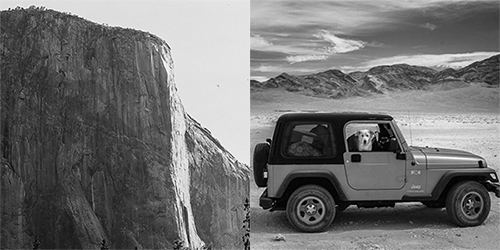 El Capitan on left. Oliver at the Eureka Valley Sand Dunes on right.

Ansel Adams famously taught at ArtCenter in the 1940’s and invented Zone Theory with Fred Archer while at the school. Peter Suszynski is still teaching their timeless concept, and offering students the unique opportunity to visit and photograph Yosemite National Park – a favorite haunt of Adams and the ideal place to put his theory to the test. The assignment for the class is to create six unique but cohesive images. It is a difficult project but Pete’s guidance and the Zone Theory system make it possible. 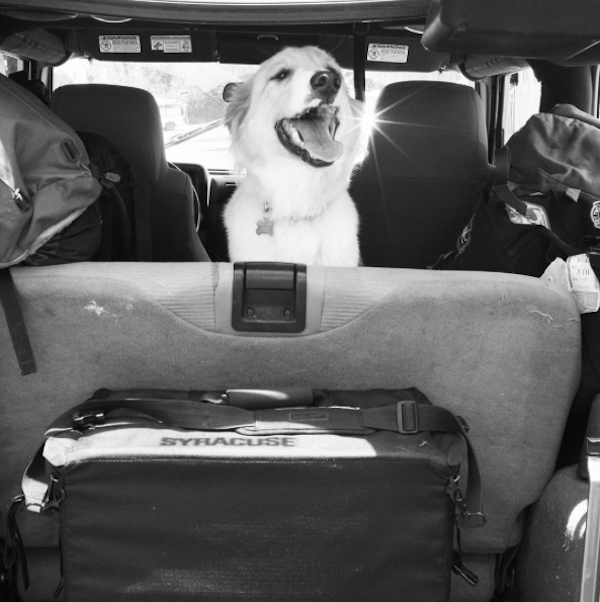 My trip started off in a unique way: I decided I’d take my dog Oliver on our camping trip. Classmate Justin DeAndrade joined me for the ride up. Needless to say, my Jeep Wrangler was packed to the windows with camping gear and photo equipment. Oliver had his spot in the backseat, he was a bit disgruntled to forfeit shotgun to Justin but he got over it.

We planned on meeting a couple of my classmates but we took the longer route up so we didn’t get to the campsite in time. We crashed in a rented cabin the first night. The stars looked great from inside our airconditioned room. We were glad to postpone roughing it for one night. 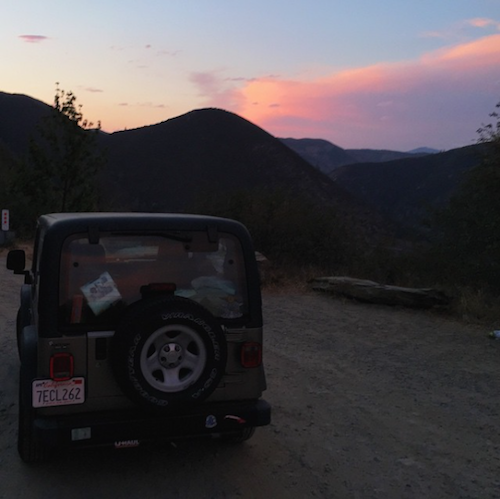 My Jeep Wrangler sat on the side of the highway, it was very early in the morning and my classmate was using a small stove on the side of the road to make coffee. I stared at El Capitan. It was my first time in Yosemite. I’d driven 8 hours to get to this spot and it was nice to take in the view. I’d shouldered my 4×5 camera (the old-school one that looks like an accordion with a lens on it) and found a cinematic point-of-view to take my photo. Oliver barked a little because I walked too far from him. I composed the image and thought: What would Ansel Adams do?

Among other things, Ansel Adams was well known for landscape photos. His black-and-white, large format images of Yosemite Valley are beautiful. Adams photos, and connection to ArtCenter, was a selling point for me when I was looking at schools to attend. So implementing his theory in some of the same places he created his iconic American photos was a dream come true. 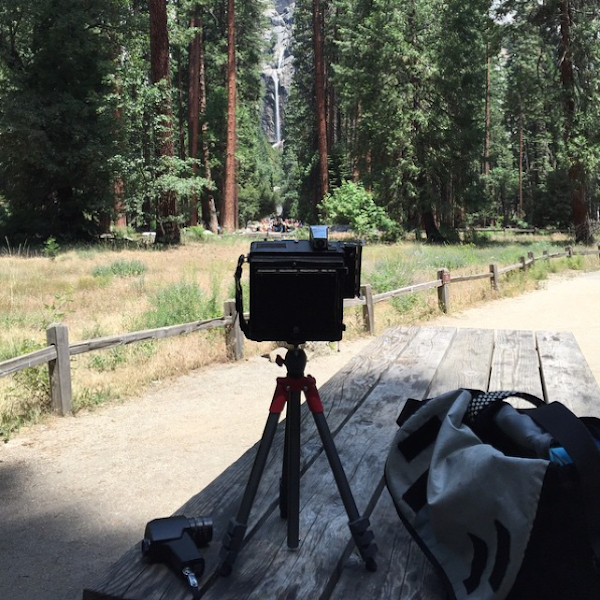 Zoning out in Yosemite.

Zone System is a methodology for envisioning the values to appear in a black-and-white print and for determining exposure and development, based on a scale of shades ranging from 0 (black) to IX (white). 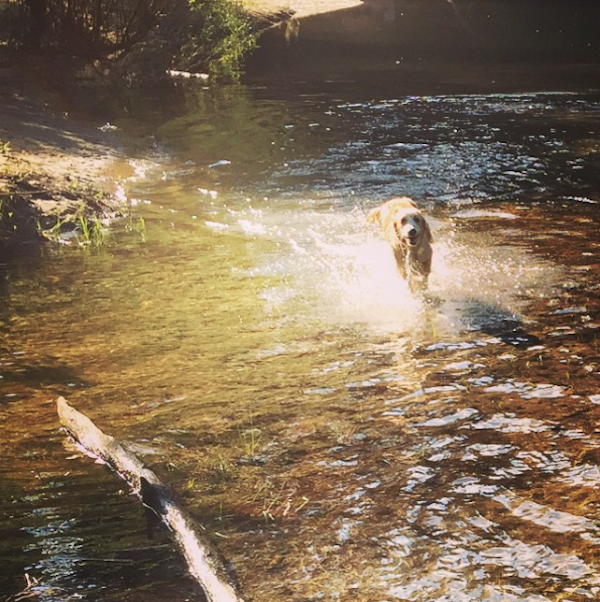 Oliver would jump out of the jeep every time we stopped to take photos with our 4×5’s. He’s really good off-leash so he’d just smell every tree in the area. I took photos while he ran around. Then I noticed he’d jumped in the river for a swim. He’s part Labrador so he loves water. This was a mild inconvience because I had to dig a towel out of the packed Jeep. We stopped anytime we thought an overlook was nice and we’d get out for a minute. We also rolled the windows down because now we had wet-dog smell in the car.

We met up with the rest of the classmates the next day and hung out. I was exhausted from driving all day. Oliver wanted to check out every campsite in the area as well. One classmate was toting around an 8×10 taking photos; and the other was shooting infrared imagery 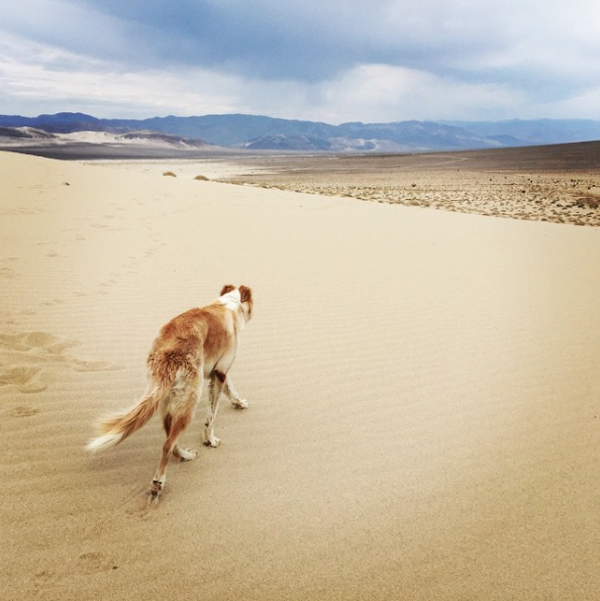 Justin had been talking about shooting in the Eureka Valley Sand Dunes since we started the class so we headed there in the morning. The sand source is unknown, which makes these dunes particularly cool because they don’t match their surroundings and seem to appear out of nowhere. These incredible dunes are over 700 feet high and cover a three-mile area. It was a bit of a drive from where we made camp, not to mention the last 10 miles took about an hour. This last leg of the drive was excruciatingly slow because the road is so bumpy that even the jeep couldn’t go over 10mph. Justin produced some amazing imagery at the dunes. 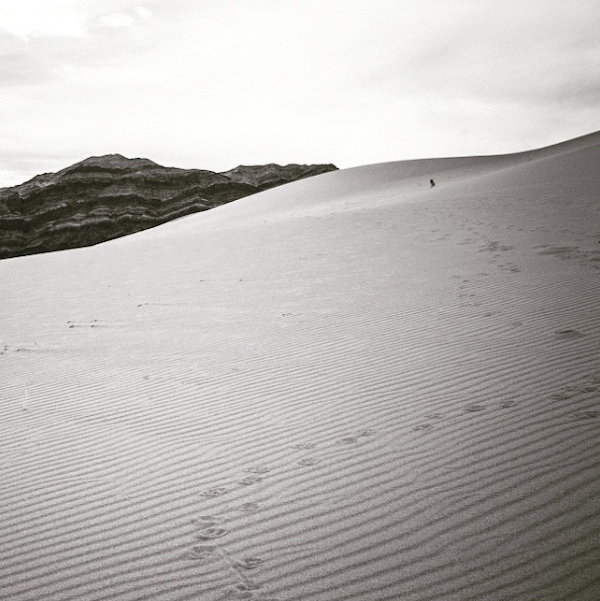 Oliver ran around on the dunes until he got hot and then went back to the Jeep for shade. He panted heavily in the air-conditioned Jeep. Oliver is like me, a city kid at heart, and we looked at each other and knew it was time to get back home to Downtown LA. It wasn’t until I stepped inside my clean apartment that I realized I smelled worse than Oliver. Oliver of course was probably the most relieved to be home: he crashed out on his giant pillow right away.

This trip was one of the highlights of my time at ArtCenter. I won’t recall all the hours spent Photoshopping images. But I’ll always remember the beauty at El Capitan and coffee at Yosemite.