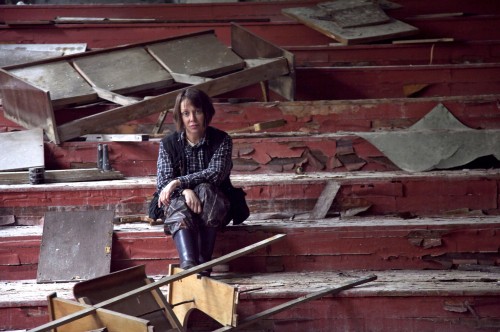 On the eve of her highly anticipated midcareer survey Diana Thater: The Sympathetic Imagination, opening November 22 at the Los Angeles County Museum of Art, we pay a studio visit to the ArtCenter alum and graduate department chair known for her groundbreaking film-, video-, and installation-based works.

She’s snorkeled with wild dolphins, regularly watches the Nat Geo channel and lives with four rescue cats. So it seems only natural that Graduate Art Chair Diana Thater (MFA 90) would use her empathy for animals as the foundation for a remarkable series of video and film installations dissecting the knotty dynamic between humankind and wildlife.

Sipping an espresso in the cozy Highland Park studio and home she shares with artist/musician T. Kelley Mason, Thater, dressed in a hoodie, black pants and sandals, says, “When I go on shoots, I find my relationship to the animals is very different from that of the crew. They’re not alien to me.”

As stray Spiffy insinuates himself alongside her on the sofa, Thater elaborates. “I’ve had very close contact with gorillas, wild dolphins, chimpanzees. I’ve had monkeys climbing all over me, I’ve petted a tiger. You have to be really open in order to work with animals in that way,” she laughs. “I hope I am.”