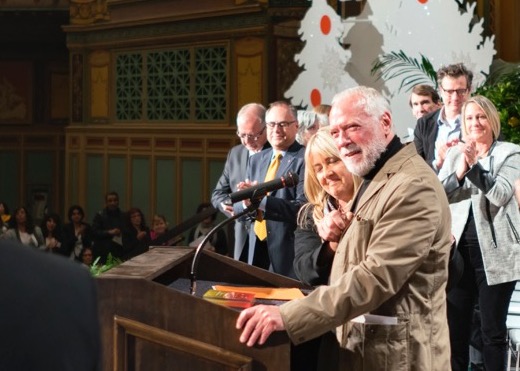 It’s not hyperbole to say that billions of people around the globe have seen the work of Illustration alumnus Drew Struzan (BFA 70).

As “the man behind the poster,” the 68-year-old Struzan has created iconic imagery for the Star Wars, Indiana Jones, Back to the Future, Muppets and Harry Potter series of films. Other instantly recognizable works of his include posters for Coming to America, The Goonies, First Blood and The Thing.

And though he’s retired from the entertainment industry to focus on his studio work, he recently lent his deft hand to a poster for Batkid Begins, the documentary about the boy who became Batman for a day thanks to the Make-a-Wish Foundation, and a D23 convention exclusive poster for Star Wars: The Force Awakens, which opens in theaters today.

This past weekend at ArtCenter’s Fall 2015 graduation, Illustration chair Anne Field presented Struzan with the ArtCenter Alumni Lifetime Achievement Award. After eliciting a standing ovation from the crowd inside the packed Pasadena Civic Auditorium, a visibly moved Struzan asked Field with a laugh, “Does this mean my life is over?”

After the ceremony, I met with the living legend and he was kind enough to share memories of his time at ArtCenter in the mid-to-late 1960s, when the College was located at Third Street in the Hancock Park Neighborhood of Los Angeles. 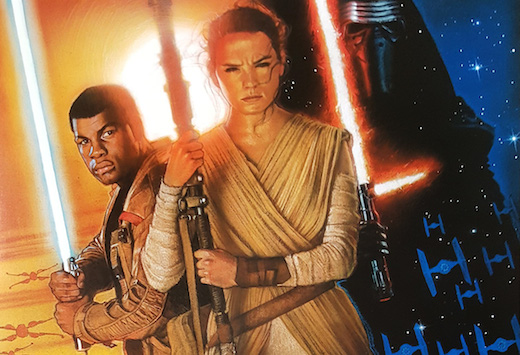 On life before college:
When I was small, four or five years old, some people from Stanford University heard about me and they came and borrowed from my parents all my childhood drawings. Because they heard there’s something weird about this kid. He draws so differently for someone his age. They never returned them. I don’t know why. But that’s how weird it was from the beginning. I heard a story that when I wanted a glass of water I didn’t say, “Mom, water.” I’d draw a picture of a glass and a faucet and water coming out into the glass and just give it to her. But it wasn’t a childlike drawing. It was the real thing. And I could do that before I could talk, so that was when I was two-years-old. Not that I can speak very well now. [Laughs.] It’s been an oddly different life, although it was mine, so it was the only one I knew. I didn’t feel different or odd or strange, it’s just what I’m told.

On the importance of education:
You don’t come into the world knowing things. It’s said that there are no artistic prodigies, because it takes experience and knowledge and understanding of life and history and the arts to be able to do that. You don’t get that until you get an education. The education I got at ArtCenter was very sound. I know it was my foundation. That’s what I went to school for, to learn the depth of art. I was 18 years old, c’mon, I was a child. I wasn’t wise or learned or experienced, especially without the help from parents. I was kind of an ignoramus. 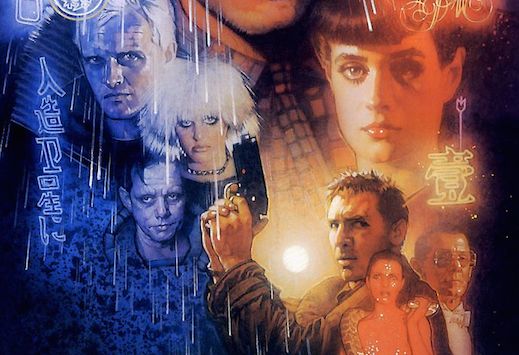 On his first ArtCenter experience:
My first day of class on my first day at ArtCenter was Perspective. We all sat down in class and [Product Design alumnus and instructor] Ted Youngkin (BFA 54) said, “Okay, here’s the first thing I’m going to do to humble you all up. I have this experiment that I do with every new class. If you can do what I ask you to do, I will give you an ‘A’ right now on the spot. So, take out your pencils and a piece of paper, and, just by your memory and your eye, I want you to draw a line exactly seven and 3/8 inches long.” He said he’d been teaching for 20 years and that nobody could ever do this. So I did the assignment. And he measured the thing and, what do you know, I did it! [Laughs.] That was my first experience at ArtCenter and the rest of it followed in suit. [Youngkin] was a sweetheart. I still have the book I made in that class and refer to it when I need to address that kind of thing.

On his classroom peers:
They all ignored me. I didn’t have any friends. I only learned later in life, from a fellow student, that it was because they were afraid of me. I was so peculiar. I had talents that they hadn’t seen before. For example, with my graduating Illustration class, we’d bring in our assignments for the week and put them up on the board to be critiqued. When class started, everybody would hang out in the hall [whistles nonchalantly] until I came in and put my stuff up. Once I left they would all run into the room and crowd around my art and just study it. 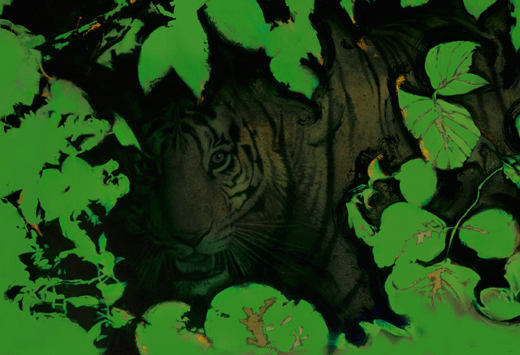 On his favorite instructor:
Lorser Feitelson, a man I consider my mentor, was the heart of the school. He was my age now, when I met him at the age of 18. He was head of the painting department. He taught painting, life drawing, and the history of art. He could draw like an angel. He painted as an artist in France on the Seine River with Picasso, and he has paintings in the Los Angeles County Museum of Art. He is a historic figure. And he talked about the heart. He would ask us about our motives and our purposes. He would talk to us about what art can do, how art lives, and how art is the most important thing through history. The soldiers and the generals and the presidents all die. But what lives on? Societies are known by their art. I learned about the spirit of the artist by listening to him.

On honing a lifelong practice:
I’m still learning. I don’t paint the same thing twice. Every time I paint something, I learn something, and in the next one I add what I learned. There are no boundaries and definitions, there’s no right or wrong. If it works, then it was right. There’s no one thing that works. That’s why even with 6,000 years of history, we still have artists making new things. We all have our own lives and our own personalities and our own viewpoints and our own understanding and our own experiences. 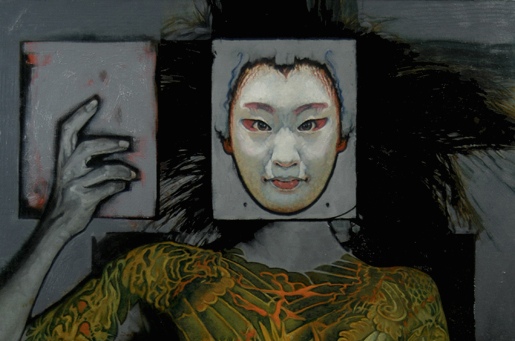 On leaving things open to interpretation:
I don’t illustrate a story or an idea or a perception. I don’t have a point. I’m making emotional attachments but not story attachments. And that’s especially true in my fine art, where I’m completely open-ended as far as what I’m painting and what I’m searching for. I don’t tell you, “From this painting, you’re supposed to learn this.” If you look at them, it’s like I paint a door and you have to go through the door. And on the other side, what you find is a mirror. Whatever you think, whatever you feel, whatever you need, is what you will find in my painting. Each person that sees it will see something different. And that’s okay. That’s why I do it that way.

Below: Trailer for the 2012 documentary Drew: The Man Behind the Poster.