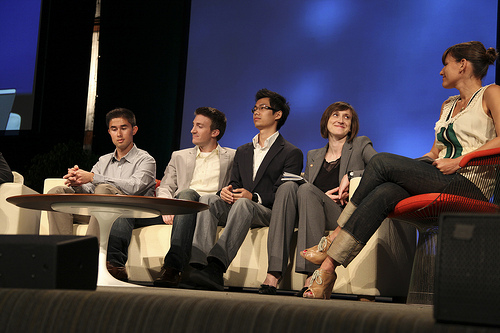 Johanna Björk of Goodlifer has written a very nice recap of Art Center’s involvement in the Opportunity Green Business Conference and the Art Center Summit, Projects and Partnerships in Sustainable Design, held September 22 through 24 at L.A. Center Studios in downtown Los Angeles.

Björk says that the most popular panel at the conference appeared to be Sustainability by Design, featuring a panel of five Art Center students who described their work featured in the Taschen book Product Design in the Sustainable Era. The work, also on display as part of an exhibit at the event, was produced in the Design for Sustainability 2 studio led by instructors Heidrun Mumper-Drumm and Fridolin Beisert.

Writes Björk: “The future, seen through the eyes of these students, is certainly bright and filled with innovation. The thing that strikes me about their designs is that they are simply well-done. The sustainability of the products is inherent, not something that was forced into the picture later. Could it be that all truly good ideas are inherently sustainable?”

Enjoy this new set of photos from the event, and read the rest of the article: Green Can, Should and Has to Be Profitable