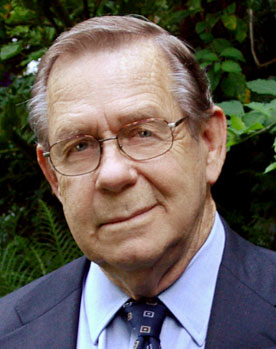 Award-winning graphic and logotype designer, alumnus, mentor and revered faculty member Doyald Young, who passed away in February, will be honored by his alma mater with the Doyald Young Memorial Scholarship. The scholarship, which will be available to incoming and current Graphic Design students, was announced at Young Love, a celebration of Young’s life and legacy taking place at the College last weekend. With enough support, the College intends to endow the scholarship to benefit its students in perpetuity.

“Shortly before his passing, Doyald said, ‘If you have the gift of teaching, you must pass it on,’” Art Center President Lorne Buchman says. “In establishing the Doyald Young Memorial Scholarship, it is our hope that we honor the generosity and strength of a gifted artist and powerful teacher—and encourage others in that same spirit of giving to ensure his legacy in the next generation.”

Young was named Inaugural Master of the School by Art Center in 2001, named a Fellow of the Los Angeles chapter of AIGA in 2006, received an AIGA Medal in 2009 and received an honorary doctorate degree of humane letters from Art Center in 2010. His life story and immeasurable talent was also documented by lynda.com as part of their 2010 “Creative Inspirations” series. Young received his formal education at Frank Wiggins Trade School and Art Center.

Individuals interested in making donations to the scholarship can donate online, or contact Senior Development Officer Palencia Turner at 626.396.2366 or palencia.turner@artcenter.edu.