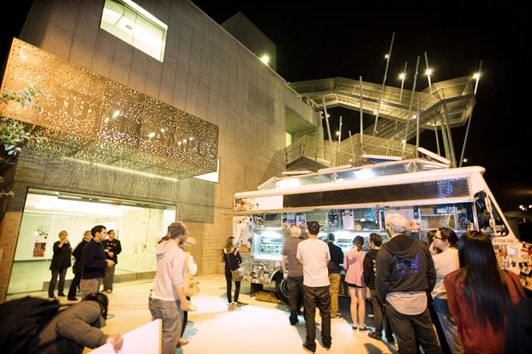 People gather at South Campus for an evening exhibition.

The planned expansion of Art Center College of Design’s South Campus recently received a significant endorsement when the College was awarded a grant of $1 million from The Ralph M. Parsons Foundation.

The grant, which will be used to defray the cost of the 2012 purchase of a former U.S. Postal Service property at 950 South Raymond in Pasadena, will enable the College to extend its educational reach and resources while invigorating art and design education. The expanded South Campus is expected to be ready for use by students and faculty by September, in time for the beginning of the 2013–2014 academic year.

In The Parsons Foundation’s history, awards of this size are rare. According to Wendy Garen, Foundation president and chief executive officer, of the 5,000 grants awarded by her organization since 1978, only 33 have been in the seven figures. “These designations are important because they acknowledge that the recipient institutions are really cornerstone institutions,” she says. “They demonstrate excellence in all that they do.”

Art Center President Dr. Lorne M. Buchman, noting the grant’s significance, says, “Building upon the unprecedented support of our alumni for the acquisition of the former USPS building, The Parsons Foundation’s grant signals to the community the growing importance of the creative professions to the economy and our world. We are profoundly grateful to The Parsons Foundation for sharing Art Center’s vision of exceptional art and design education.”

Art Center was first awarded a grant from The Parsons Foundation in 1981. Throughout the years, including this new grant, the total amount of support from Parsons to Art Center is $2.8 million.

The Parsons Foundation is focused on helping to create the best possible Los Angeles, Garen adds. “Art Center is both a part of the Los Angeles area and a part of the bigger world; it has impact and reach much larger than our community.”

The College selected award-winning firm Michael Maltzan Architecture as its partner to reimagine Art Center as a campus with three centers of learning—an expanded South Campus, a renovated Hillside Campus (1700 Lida Street, Pasadena), and a virtual campus—each optimized for the particular needs of artists and designers while also fostering new collaborations among disciplines.

These developments are a direct outgrowth of an ambitious five-year strategic plan called “Create Change,” spearheaded by Buchman. He successfully rallied the Art Center community in a visioning process that addressed the challenge of securing the College’s legacy while ensuring that its distinctive education remains cutting-edge and pertinent into the future.

Since 1978, The Parsons Foundation’s grantmaking has helped Southern California’s nonprofit organizations improve the broad fabric of the entire community. Their approach recognizes that museums and arts programs are as important to our collective well-being as after school services, community clinics and food banks. Accordingly, the foundation invests in excellence in social services, health care, the arts and higher education in Los Angeles County.