Art Center College of Design, through a partnership with the City of Pasadena Public Library, has taken its innovative gun violence education and prevention initiative into local neighborhoods. Uncool: The Anti-Gun Violence Project, supported by the Nathan Cummings Foundation, provides vital new resources for educators and prevention advocates in the form of original illustrated children’s books for six- and seven-year-old readers. 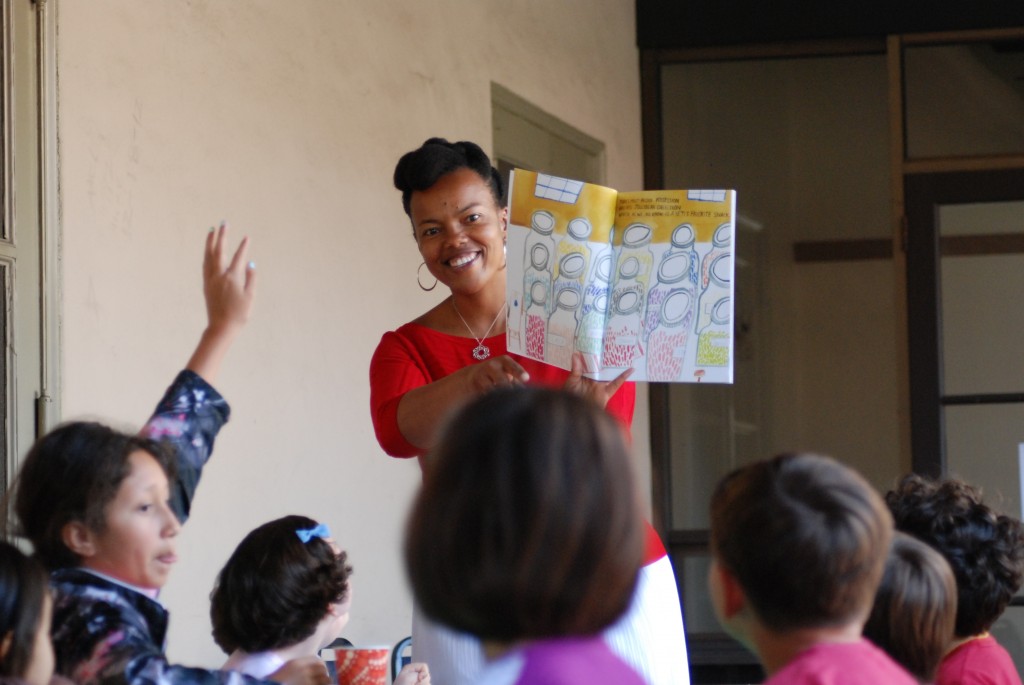 At the Pasadena Public Library, teacher LaShawn Moore reads to children from the book “Mark and the Jellybean Monster” by Art Center alumna Ariel Lee. Photo by Sylvia Sukop.

Throughout the month of April, the Pasadena Public Library has offered a series of free public programs for children and their families — hands-on creative workshops inspired by the “Uncool” children’s books — led by an Art Center faculty member and other educators, including some of the designers and storytellers who created the books. Curated by Helen Cahng for Designmatters at Art Center, the local series is a pilot program with potential for expansion in other communities.

Ariel Lee’s book Mark and the Jellybean Monster was the centerpiece of the first workshop on Sat., April 6. Kindergarten and first-grade teacher LaShawn Moore read the book aloud to an eager group of 11 children, prompting them to offer their reactions along the way.

In the story, Mark moves past his fear of something he does not know — a Yeti monster — not by resorting to guns but by discovering a shared love of jellybeans.

“In the end,” says Lee, the book’s creator, “a gun doesn’t protect Mark, but making friends does.”

Next, as the children watched in fascination, Lee demonstrated how she painted the blue Yeti that had come so vividly to life in the story they just heard. Then she invited them to make their own paintings.

One girl focused on copying Lee’s blue Yeti, two others painted jars of bright-colored jellybeans. One of the youngest workshop participants painted with such intensity that his brush wore a hole through the center of the sheet of paper. An older boy announced with fanfare, “And now — watch — I will do the world’s smallest Yeti!” And with that he let a single drop of blue paint fall from his brush onto the paper.

Moore says age six or seven is not too young to begin a conversation about guns. “It’s not too young because of the world we live in,” she says, adding that having colorful, fun books like these really helps. “It starts raising awareness without raising fear.”

Libraries play an important ongoing role in creating safe space and activities for children. “We all know that students who are involved in after-school activities, like those offered by the library, are less likely to be involved in dangerous or non-productive pastimes,” says longtime Pasadena Public Library Director Jan Sanders. “If libraries, schools and interested adults do their work with children, we are much less likely to see these children get into trouble later. We are delighted to partner with Art Center College of Design in the ‘Uncool’ project. The process of creating a book, comic book or poster helps young people develop an appreciation for literature and its production.”

Research led by the class revealed a dearth of popular print media that creatively engage children’s imagination while offering an alternative to the glamorization of guns. For lead faculty member, Illustration Department Associate Professor David Tillinghast, “Finding a way to speak directly to the sensibilities of six- and seven-year-olds was simultaneously a challenge and an inspiration. We avoided themes that might seem ‘too scary’ while tailoring messages to fit this age group’s level of cognitive development.” 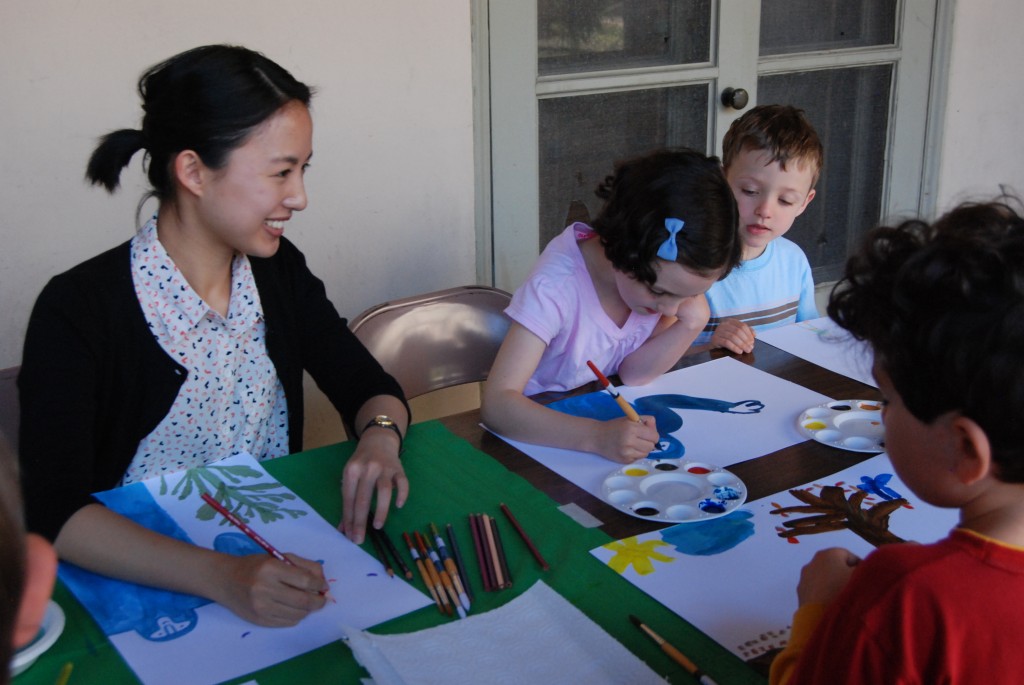 Nearly every child has experienced the joy of illustrated children’s books, but few have had an opportunity — as they did with Art Center alumna Ariel Lee and, at a later workshop, with current Art Center student Vivian Shih — to meet an author-illustrator in person. With strong visuals balanced by imaginative narratives, books like theirs address the topic of guns with subtlety and originality. Fresh, relevant, eye-catching stories introduce messages countering the perception of guns being “cool.” In addition to Mark and the monster he befriends, other characters in the series include Amos the bullet who longs for a different life, and an interplanetary visitor who sets out to try and understand Earth.

Katy Nevell brought her two sons to the April 6 workshop. “Art Center is such an incredible resource for the community,” she said, looking on as the children let their imaginations run wild with watercolors. “My boys are very into media — TV and movies — and this exposes them to other kinds of things. It’s amazing that the students and professors come out on a Saturday to do this.”

Through research, advocacy and action, Art Center’s internationally renowned Designmatters program — integrated across all of the College’s educational departments — engages, empowers and leads an ongoing exploration of art and design as a positive force in society. The “Uncool” initiative was initially developed by Designmatters over several academic terms, involving two dedicated studio courses.

“The educational programs and materials developed by Designmatters students have not only enriched the design educational experience of the Art Center students who participated in the studios that conceived them,” says Mariana Amatullo, Art Center Vice President, Designmatters, “but they have also found key stakeholders among teachers, at‐risk youth service providers and youth from underserved communities in Pasadena and Los Angeles, where issues of gun violence remain a significant challenge.” 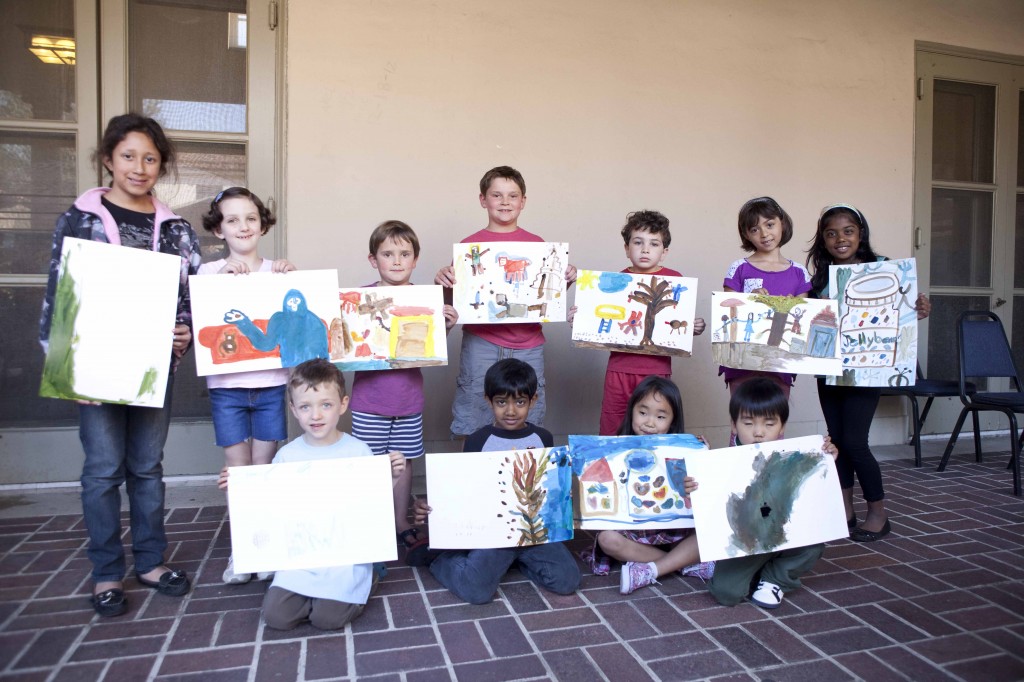 Participants in “Uncool” children’s art workshop show off their paintings — of Yeti monsters, jellybeans, and more. Photo by Alex Aristei.