In 2010, beloved Art Center faculty member Norman Schureman was killed in a tragic act of gun violence. Now, three years later, his sons Milo, 15, and Kian, 12, are students at the Aveson Global Leadership Academy, a public charter school in Altadena. On May 31, a group of Designmatters’ faculty, students and alumni visited the school’s sixth and ninth grade classes to introduce Uncool: The Anti-gun Violence Project — a series of children’s books and the Where’s Daryl? middle school curriculum — dedicated to Norman’s memory.

Designmatters Director Elisa Ruffino gave Kian’s sixth grade class an overview of the project and explained that artists and designers are creative problem solvers who play a vital and exciting role in social change. “With Designmatters, we like to say that innovation is not about seeing the world as it is, but as it could be,” she said, adding, “We’re thrilled to be carrying on this work in Norman’s honor, in his spirit.”

“Making a book is a lot of work,” Illustration instructor David Tillinghast told the students. He described the many steps it takes, from research, brainstorming and rapid protoyping, to creating the art work, refining the story and transferring the work onto a computer for layout, further refinement and ultimately printing.

Tillinghast then invited two of the Designmatters’ children’s book author-illustrators to speak. As their books were passed around the classroom, Kin Lok (Zoarmax 133’s Big Question) and Juan Marco (My Imagination Book) detailed their creative process and took questions from curious students.

Sixth grade teacher Tom Hyatt, a fan of the books and the project as a whole, noted that Lok’s story is great for teaching about perspective. “The artist is from Earth,” he said, “but he’s writing from the perspective of an alien.”

The College is donating two sets of the four-book series to Aveson, one for each of its campuses, along with the “Where’s Daryl” curriculum package. 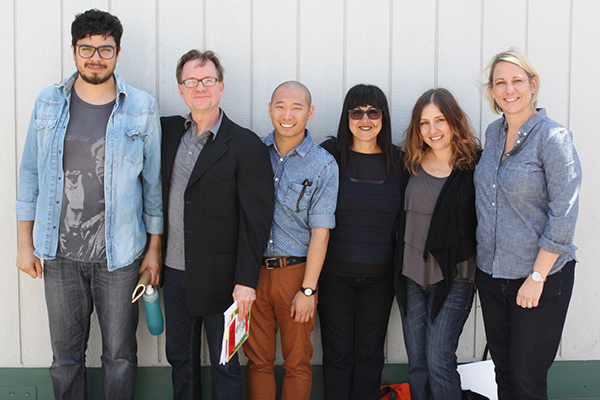 Dotted Line spoke with Norman’s widow Fati, who invited Designmatters to present the Uncool initiative at Aveson and attended both class sessions. “Kids are so desensitized toward guns,” she said. “Guns are such a major part of their lives, through entertainment, video games, movies. They’ve got to know the consequences. And you can begin to instill that at a young age.”

Fati keeps in touch with Norman’s colleagues at Art Center and their son Milo is now studying art, design and film. “His father taught the infamous Vis Comm 4 visual communication course that is a core part of Art Center’s Product Design curriculum,” said Product Design Chair Karen Hofmann. “And it was always filled with students from other majors like Entertainment Design, Transportation Design and Illustration.”

“I love my Art Center community,” said Fati. “We’re so appreciative and so proud of how supportive they’ve been in the last few years.”

Earlier, as Tillinghast wrapped up the sixth grade presentation, he touched on the reality that members of the Art Center and Aveson families have both painfully experienced. “Guns can seemingly make you feel safer,” he said. “But we know from statistics that guns actually make you less safe. Wouldn’t it be a better world if everyone could just be friends?”

“It’s the best way to defeat your enemy,” came one student’s instant reply.