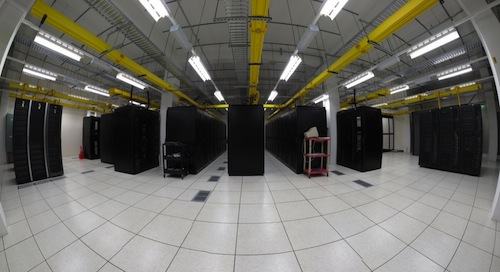 The data center at One Wilshire

“How do I talk about infrastructure?” Norman Klein wonders aloud as Media Design Practices’ annual dialectical bus tour of Los Angeles gets underway on a sweltering Friday morning in September. This annual odyssey through the pivotal places informing the city’s past, present and future has become a rite of passage for students pursuing a masters degree in Art Center’s forward-thinking program exploring the subtextual ideas at the intersection of design, social impact and culture.

Klein, a media and urban theorist who divides his time teaching classes on the relationship between Los Angeles, history and forgetting at Art Center and CalArts, has been presiding over this event since its inception some ten years ago. The tour takes its name from the original concept, which placed him dialogue with then MDP faculty-member Peter Lunefeld, who is now a professor in UCLA’s Design/Media Arts department.  That lively meeting of the minds then formed the basis for the tours future pairings with Klein acting as the constant.

This year’s dialectical duelist is Rosten Woo, a designer, writer and educator (currently an MDP thesis advisor) who co-founded the Center for Urban Pedagogy, a New York non-profit dedicated to using art and design to foster civic participation. The two are charged with shedding light on this year’s theme — SUB-LA: The hidden (in plain sight) infrastructure that ties us to the world – which explains Klein’s initial quandary. 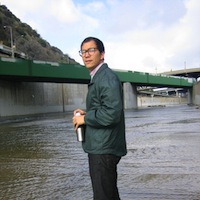 “It’s like visiting someone’s house and only seeing the basement,” he adds, from the front seat of the van transporting he and Woo to San Pedro, where they’ll join a cohort of students on a boat tour of the Los Angeles harbor. “Infrastructure is an important subject often ignored and left up to the Army Corps of Engineers. But when we talk of redesigning a more livable city that’s more regional and local, infrastructure is very important.”

After arriving at the docks, students gather around as Klein and Woo explain the role and significance of L.A.’s role as the busiest port in the United States. This is a part of the local economy that often gets overlooked and overshadowed by the region’s more glamorous industries. Klein offers the big picture perspective: “The harbor is the most futuristic part of any city.” While Woo drills into the data: “8.1 million containers passed through this port in 2012 making it the eighth busiest in the world, when combined with Long Beach.”

Then discussion turns to the security risk’s involved. “Who’s screening all that cargo?” Klein asks rhetorically. “Nobody.” Woo responds somewhat skeptically and begins tapping away at his phone in search of answers.

After the hour-long boat ride past vast floating behemoths, industrial sized trash compactors and clusters of seals sunning themselves on buoys, we return to the van en route to our next destination: Hermosa Beach. Woo returns to the earlier debate about port security. “You’re right, I don’t think they do screen these containers,” says Woo. “I’ve been searching and can’t find any indication of that process.”

Upon arriving at our next hidden-in-plain-sight destination, a pretty blond sand beach in the South Bay, Klein marvels at how “power has come to look so ordinary in today’s world.” It turns out that Woo and Rosten have pinpointed the exact spot where the giant fiber-optic cable transporting internet data enters the Americas from Asia. “If you can imagine someone shining a giant flashlight into a dark tube, that’s how information travels between different transmitters placed at various points along the way,” explains Woo. “So even though we think of the web in abstract terms, there’s actually a very analogue reality to how we interact with the internet.”

The process he just described has a paradigm shifting impact on the students, who gasp audibly, glancing at the sand beneath their feet, below which the cable travels to various Verizon power facilities toward its final destination at One Wilshire, which also happens to be the final destination of today’s tour.

Before this tour, it would have been impossible to fathom that the nondescript office building near the corner of Wilshire and 7th in Downtown Los Angeles serves as the hub for the world’s communication networks, housing the data center operator, CoreSite, in which hundreds of internet service providers connect their networks to each other.  In other words, stepping into One Wilshire is not unlike entering the Matrix.

Students’ minds are appropriately blown with the tour’s final stop. “I still cannot believe that the world wide web is really a world wide web of cables that stretch across ocean floors and under streets,” Media Design Practices student, Jenny Rodenhouse, later wrote in an email to the Dotted Line. “To be able to see the physical representation of the internet nested and intertwined in the ceilings at One Wilshire was unimaginable! To think – I am writing this in gmail and when I hit send it will visit various physical locations before it arrives, and seemingly within an instant.”