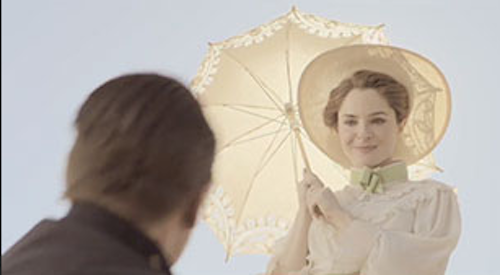 Kalman Apple’s “A Day in the Country”

Go Back to Art School in your head.  You can see it right? Germanic block letters tattooed between the shoulder blades, or etched in a delicate script on the hip or across the belly. I’m a little old fashioned that way, so I’ve kept it simply as a personal mantra. Whenever I’ve been stumped or creatively blocked, I invoke the mantra to help me get away from the mediocre solutions I’m hoping to avoid.

Recently, the meaning of that phrase came back to me-­‐ and this time from an unlikely place. In this instance, I was up against a seemingly impossible deadline to finish a film. I started shooting on a Wednesday for a project due by 6 AM on the following Tuesday. The deadline was for a contest Canon USA was sponsoring to promote its latest DSLR camera.

The contest was to be judged by Ron Howard and his daughter, Bryce Dallas Howard. You probably remember him best as a child star, brilliant director or the guy who introduces the magic of movies on the tram ride at Universal Studios. When I first heard about Project Imaginat10n, it sounded very much like an Art Center class assignment. Take ten still images, each representing an aspect of storytelling and create a 1-10 minute film inspired by those images. The genesis of this contest comes from a statement Ron Howard made years ago, “We’re all creative.” And to prove it, Canon has stepped up to provide the forum.

I thought: ‘What a great opportunity and better yet what a great excuse to make a film.’ I selected ten photographs from the ten storytelling themes that inspired my film, “A Day in the Country,” an Edwardian Sci-­fi drama. The images came from a pool of 91 winning photos from an earlier Canon stills contest.

I had budgeted for a one-day shoot, which was ambitious but not impossible. However, as the sun dipped behind the surrounding Malibu hills, I felt like I was witnessing an accelerated time-lapse of my life. I was scrambling with my co-producer/ screenwriter to find a solution to our increasingly urgent dilemma:  We hadn’t shot the ending to the movie. Fast forward an hour, and we were in the midst of wrapping out in the dark. It was Charlie, a very busy key grip on features and commercials, who stepped up to offer his help. As old industry saying goes: Get the keys and the rest will follow. Unfortunately, our line producer was quick to remind him that much of our crew and gear would not be available if we came back the next day to shoot.

And that’s when I heard it. Charlie said, “Hey it’ll be ok. It’ll be just like when we were back in school.” That was the spirit that not only reminded me of my mantra but reminded me that I could lay down dolly track and tie down an 8 by silk with the best of them. I was reminded that the collaborative effort of filmmaking relies on a community of filmmakers. Whether it’s your co-producer, a key grip, or a makeup artist — they are there to creatively contribute to the project. To me, this revelation epitomized Ron Howard’s call to creative action. And it was that sense of community that got me through the rest of production. This project involved talented people who came together to support an idea that was inspired by ten photos — all very reminiscent of an Art Center class assignment.

So, now we wait on pins and needles to see if we’ll become one of the five winners to be screened alongside films by five celebrity directors at a gala film festival this fall. And it gets better. The five contest-winners will receive a cash prize, an all expense paid trip to the event and a chance to meet with Ron Howard— tram ride excluded.

Kalman Apple graduated from Art Center with a BFA in Advertising. On September 19, his internal trip back to Art Center was further rewarded when the panel of Project Imaginat10n judges chose his film as one the contest’s five winners. Please join us in congratulating him.