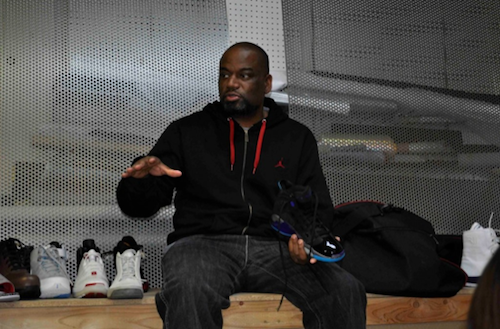 With these words, more of a challenge than a question, D’Wayne Edwards begins to make inroads into rowdy scrum of inner city high school students seated before him in Art Center’s Ahmanson Auditorium. The response: a cacophony of groans.

It’s 8:30 a.m. on a late October Monday morning and Edwards, founder of Pensole Design Academy and former design director for Nike’s Jordan brand, has come to Art Center to inspire and illuminate the opportunities available to creative students in various areas of design. He has spent enough time with teenagers to know that engaging them at this time of day can be a losing battle. And he’ll need to act quickly to establish that he understands where they’re coming from and, more importantly, he knows what they need to do to get to someplace worth going in the future.

Edwards fires off a strategic series of prompts beginning with one that matters most: “How many of you dream?”

A few grumbles echo through the room.

“How many of you guys believe you’re an innovator?”

“That means doing something in a new way.”

Edwards isn’t discouraged. In fact, he has these kids’ attention, which is no small accomplishment. His goal here is simply to instill the ability to see a broader array of opportunities available to them in creative fields. Edwards may be a spectacularly successful shoe designer. But his greatest talent may lie in his ability to see the future — his or anyone else’s — as a blank page. Just add talent, creativity, ambition and No 2 pencil lead.

Edwards remembers what it feels like to be a teenager with big dreams and scant resources available to him to help realize them. “This is where I started to dream about being a footwear designer,” he says, filling the screen behind him with a slide of himself as a school-age kid with a cockeyed grin. “I grew up around gangs and violence. My opportunity to get out was pretty rare. So it became my focus to do that.”

Raised by a cash-strapped single mom, Edwards had no shortage of setbacks and tragedies that could have easily been translated into opportunities to give up on his dream.  Two of his older brothers were killed in separate incidents of gang violence while he was in high school. And then there was the guidance counselor who encouraged him to join the military, because “no black kid from Inglewood will ever become a footwear designer,” he recalled. “She became one of the first people I call the Dream Killer. She made it onto the “thank you” wall I created for all the people who told me I couldn’t do something. You’re going to need this wall. There’s going to be rejection from life in general, at school and at your work, and those will be the things that motivate you to do something different.”

In truth, Edwards had Type A ambition to spare, and probably didn’t need the chorus of nonbelievers to fuel his determination. But Edwards has proven them all spectacularly wrong, ever since he launched his career submitting footwear sketches into the suggestion box L.A. Gear until he landed his first gig as a shoe designer. From there, he quickly shot to the apex of his industry leading the design team at Nike. In the years since, his shoes have earned more than $1 billion worldwide.

Edward then took his own advice and allowed himself to extend his dream beyond his own success. Since founding Pensole (which offers footwear design intensives to students from Art Center and elsewhere) he has mentored more than fifty students who are now designing footwear.  “I started Pensole because I was disappointed that a $50 billion industry doesn’t have a pipeline,” he recalled. “I switched careers from being a designer to being a farmer. I’m now planting seeds. If I see talent, I want to help develop that in you to become the designer you want to become. I don’t want my legacy in this industry to be the products I design. I want it to be the lives I impact.”

He then scanned crowd of students, who were sitting a little taller in their seats and decidedly awake, before issuing his last challenge: “I’ve been all over the world through product, through design. That’s the power of design. Sometimes your goal should be to dream a little bigger.” He pauses for effect. “How many of you feel like you’re an innovator now?” The auditorium became forest of hands swaying in the air.