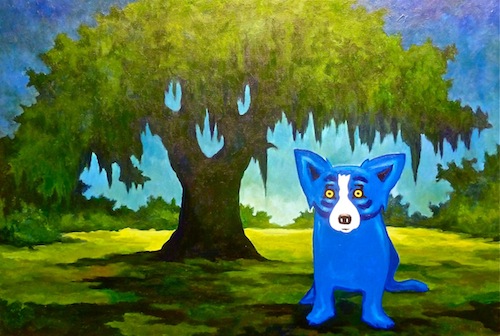 George Rodrigue, the celebrated painter best known for his Blue Dog series of popular canine portraits, passed away last month in Huston. The 69-year-old Art Center alum (Graphic Arts, ’67) distinguished himself as a bon vivant who showed an early flair for depicting the bon vivant culture of his native Louisiana, often set among the three pillars of food, family and fais do do.

Rodrigue is the rare contemporary painter to achieve such widespread commercial popularity without sacrificing the soul and integrity of his subject-matter. After seeing early success dabbling in high-profile portraiture of political and creative icons like Mikhail Gorbachev, Walker Percy and Paul Prudhomme, Rodrigue found his muse in the form of his dead dog, Tiffany. Using a snapshot as his template, he transformed his beloved canine companion into a cerulean spirit animal with bright orange eyes that stare out from the canvas, like warm suns (or caution signs, depending on the painting and the mindset of the observer).

Blue Dog continued to hold Rodrigue in its thrall for the last quarter century of his life, during which he painted nearly nothing else. Fortunately, Blue Dog became a pop culture icon that proved to be as versatile as it was profitable. Rodrigue painted Blue Dog portraits with fellow icons, like Marilyn Monroe, inside soup cans (a bow to the king of pop art, Andy Warhol) and, perhaps most famously, in ads for Absolut Vodka. Blue Dog originals are now prized collectors’ pieces, regularly fetching five and six figure sums.

Rodrigue’s financial success stands in stark contrast to his modest upbringing as the son of a bricklayer who picked up painting while laid up in bed recovering from polio. At Art Center, Rodrigue developed a love for silk screening and laid the foundation for his future as a painter whose images also doubled as a pop culture brand.

Rodrigue is survived by his two sons and his wife, Wendy, who has written extensively about her life with Rodrigue in a series of on-line essays, Musings of an Artist’s Wife, and in a new book, The Other Side of the Painting.